A Dress Trimmed with Zippers, 1928 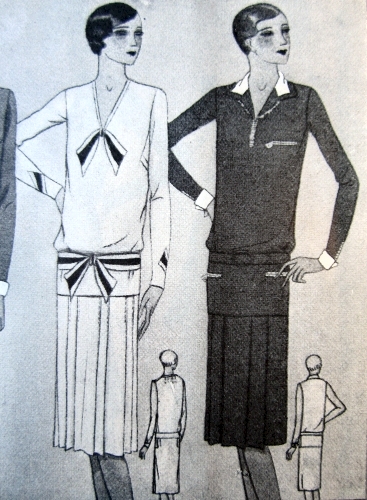 There’s something very unusual about the dress on the right. 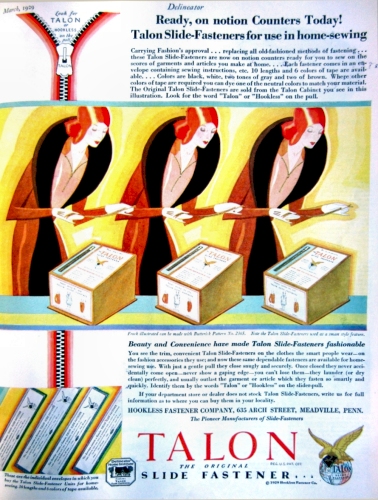 This full-page advertisement for Talon slide-fasteners, made by the Hookless Fastener Company, appeared in Delineator magazine in March, 1929. (They were not called zippers, yet, because in 1929 a “Zipper” was a trademarked rain boot made by the B. F. Goodrich rubber company.)

Slide fasteners had been used in clothing, money belts, sleeping bags, etc. by the military in World War I, and in some men’s sportswear after the war, but they were not yet associated with women’s clothing. Many references will tell you that Elsa Schiaparelli pioneered the use of zippers in womens’ clothing in the 1930s, but in fact, she was not the first or the only designer who used them. [She does deserve credit for pioneering the use of colored plastic zippers, and for generating the most publicity about zippers being used in women’s wear in the mid-thirties.]

From 1924 to 1927, the Hookless Fastener Company had been selling seventy per cent of its output to B.F. Goodrich to use in ‘Zippers.’

Then, suddenly, the novelty wore off (or the market was saturated), and Hookless was forced to find other markets, and other uses for its products. Hence, this campaign to introduce slide fasteners to home stitchers.

We take zippers so much for granted now that this ad bears close examination:

How to Find a Zipper

The mid section of the advertisement shows women what the display case — “Talon Cabinet” — at the fabric store will look like: 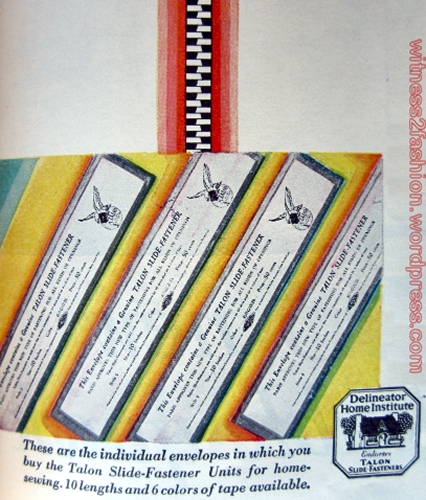 The women shopping for zippers are wearing dresses that close with zippers.

The fine print in this ad is what sent me pouring through old Delineators: “Frock illustrated can be made with Butterick Pattern No. 2365. Note the Talon Slide-Fasteners used as a smart style feature.”

Here it is, featured in the December 1928 issue of Butterick’s Delineator magazine.

#2365: “A two-piece frock adds the metal trimming touch of slide fasteners that deftly close the turn back collar, pockets, and cuffs of the slip-over blouse. There is a narrow belt, and the one-piece straight skirt is plaited [i.e., pleated] in front and plain in back. The frock is designed for 32 to 35 (15 to 18 years) and 36 to 48 [bust measurement.]”

Of course, it’s impossible to know if any home stitchers actually made pattern #2365 in 1929. Zippers were relatively expensive — probably why the ad mentions that they will outlast the garments they’re put into — and this pattern uses six of them. The design does reinforce the message that Talon slide fasteners come in “10 lengths and 6 colors of tape.” And, as in many Schiaparelli designs of the 1930s, there is no attempt to conceal the zippers; they are used as trim as much as for convenience.

The same issue of Delineator  (March 1929) featured a line-for-line copy of an ensemble by Madeleine Vionnet which also uses zippers. But that deserves an entire post to itself!

Two good sources for information on the history of the device we now know as the zipper are Zipper: An Exploration in Novelty, by Robert Friedel, and The Evolution of Useful Things, by Henry Petroski.

The white dress next to the zipper dress is so attractive I feel obliged to give more information about it, and about the one on the far left. 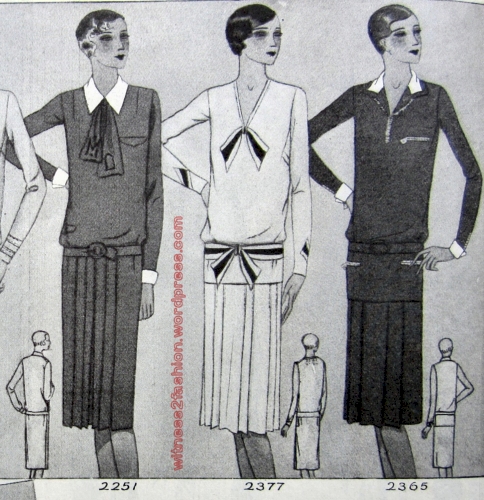 The white dress, # 2377 : “Bow knot trimming of selvage border at the V neck, close sleeves, and belt are extraordinarily smart. A skirt in front has pairs of plaits while the back is one piece, with tucks at the neck. The frock is especially good for borders. It is designed for 32 to 35 (15 to 18 years) and for sizes 36 to 44 [bust measurement.]”

The dress on the left, # 2251: “A tailored frock of light-weight wool or flannel to start the day has the new starched collar and cuffs. It is cut in one piece and trimmed with two smart pockets, tie and belt, and may be made without the inserted plaits in front, if you wish to use a heavier material. Designed for 32 to 35 (15 to 18 years); and for sizes 36 to 44 [bust measurement.]“

Flappers, Galoshes, and Zippers in the 1920s

There is a widespread belief that the term “flapper” was first applied to young women in the 1920s because of a fad among college girls for wearing their rubber galoshes unfastened (right).

By the late 1920s, two rubber companies were competing for the women’s waterproof boot market, with attractive, tight-fitting fashion boots and shoe covers.

Gaytees were made by the United States Rubber Company, and came in a range of styles including waterproofed fabric and even simulated reptile.

Gaytees advertised that their rainboots for 1929 had six new features:

Lighter weight in every pair – yet full protection.

These are “Tailored Overshoes” because they are worn over your normal shoes. “See the style show of 1929 Gaytees at your own shoe store. Then, when you buy your Fall shoes, ask to have them fitted with the Gaytees that match your new Fall costume.”

The text next to Gaytees worn with a chiffon evening gown (right) says, “Fast color linings. Gaytees won’t rub off on the sheerest evening stockings or the lightest colored evening slippers. And the pointed back adds slimness as well as extra spatter protection….

“Your shoeman will be glad to show you the 1929 Gaytees. Let him fit a pair on your slim ankles. See how snugly they hug the new shoe styles; how well they harmonize with your Winter costumes.” Prices “from $2.50 to $6.” Gaytees usually fastened with snap fasteners, but even when they closed with a ‘slide fastener,’ the ads couldn’t call it a ‘zipper’ because of . . . .

In 1921, the B.F. Goodrich Company had quietly begun experimenting with rubber boots that closed with slide fasteners from the Hookless Fastener Company. There were problems to overcome, but by 1922 Goodrich had launched their “Mystik Boots,” which closed with Hookless slide fasteners instead of snaps or buckles. They were such an immediate success that B.F. Goodrich Company asked Hookless for exclusive rights to use their fasteners. In 1923, the Mystik Boot was renamed, to draw attention to the ease with which they were put on and taken off.

“What we need is an action word,” said company president Bertram G. Work, “something that will dramatize the way the thing zips.” He quickly added, “Why not call it the zipper?” – from The Evolution of Useful Things, by Henry Petroski, p. 111.

Goodrich trademarked the word ‘Zipper.’ At first, “Zipper” referred to a brand of overshoe, not to the gizmo that opened and closed it.

The text at left says, “But remember, all overshoes that close with a sliding fastener are not genuine Goodrich Zippers. Look for and find the name Goodrich on the shoe . . . only in this way can you be sure of authentic Goodrich style with the famous Hookless Fastener which cannot rust, stick, loosen or cause trouble. . . . Over fifty thousand stores are now ready to show you the correct new colors of genuine Zippers. . . in either snap or Zipper fastener.” The Goodrich ad doesn’t mention prices, and it’s not in color. Presumably, Gaytees had to try harder.

Goodrich sold half a million ‘Zippers’ in 1923 and bought a million Hookless Slide Fasteners every year after that until 1927. By the late 1920s, the novelty was wearing off (and three to four million women already had Zippers in their closets, not counting the women who bought Gaytees instead!)

The word ‘Zipper’ may have belonged to the B.F. Goodrich Company, but in common usage, Americans were calling any slide fastener a ‘zipper.’ The Hookless Fastener Company adopted an eagle’s talon as its company trademark in 1928, and changed the company’s name to Talon a decade later (Source: Zipper: An Exploration in Novelty, by Robert Freidel, page 169.)