Hairstyles and Hats for the Mid-Nineteen Thirties

The hairstyle is designed to be worn with a hat. Delineator cover, March 1935. Dynevor Rhys illustration.

In February of 1936, Butterick’s Delineator magazine showed six fashionable hairstyles by some top New York salons — but they were photographed on mannequin heads, rather than real women. (Stylists still practice on such uncomplaining heads while training.) I have added a few photographs and drawings from advertisements to supplement Delineator’s 1936 color images. (Because Delineator was a large format magazine, a full page photo doesn’t translate well into a 500 dpi image. This is just the top half of page 16: 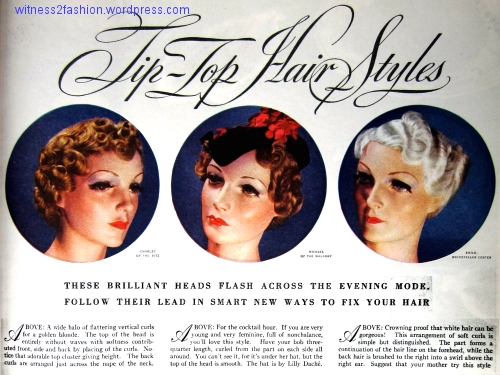 “Tip-Top Hair Styles” for evening; article by Josephine Felts in Delineator, February 1936, page 16. These brilliant heads flash across the evening mode. Follow their lead in smart new ways to fix your hair.”

Evening hairstyle for 1936 by Charles of the Ritz. Most of us wouldn’t describe this as a “wide halo” of curls.

“The top of the head is entirely without waves.”

Hairstyle to be worn with a cocktail hat, by Michael of the Waldorf. 1936.

“Have your bob three-quarter length, curled from the part on each side all around. You can’t see it, for it’s under her hat, but the top of the head is smooth.” 1936.

Evening hairstyle for white hair, by Emile at Rockefeller Center. 1936.

A “distinguished” style for white hair. “Suggest that your mother” try it. 1936.

[This one is for Lynn at American Age Fashion. I’m pleased to see that the one featured 1936 hairstyle that could be worn today without looking bizarre is the one suggested for white hair! The side part would allow for a close-fitting 1930’s hat to be worn on one side of the head, as was the fashion.] 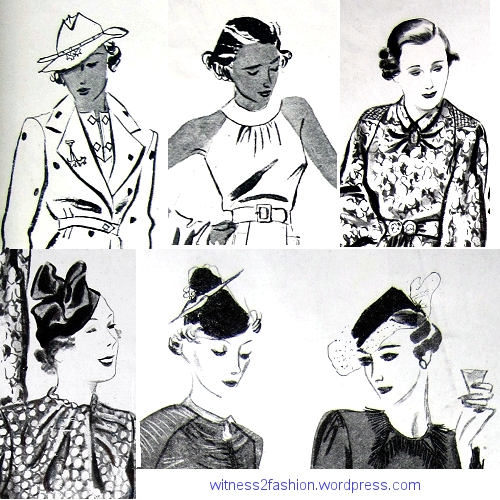 1936 hairstyles were usually flat at the crown to allow for a small hat pulled down on one side of the head. A lady always wore a hat in public in the daytime – even if it was just a tam pulled down over one eyebrow. Delineator fashion illustrations from January 1936.

Here are images from the bottom of the page of “Tip-Top Hair Styles.” 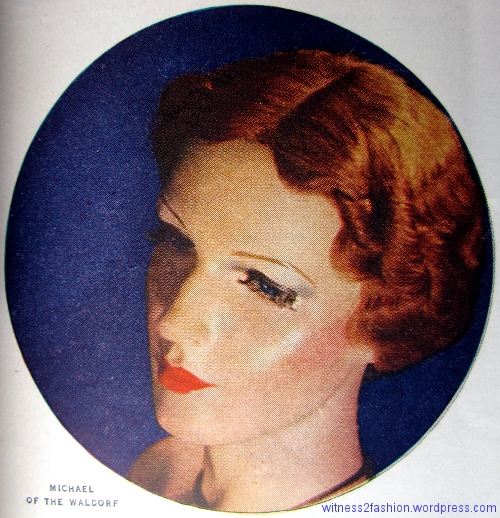 Hairstyle by Michael of the Wardorf, 1936. “The unusual side treatment comes from a rolling braid begun at the part and simulating a halo.” Delineator, February 1936, p. 16. The wide braid begins over her left eye and continues around the back of her head to the left side.

An artificial braid sometimes formed a halo or tiara effect for evening. Here is a such a braid on Ginger Rogers.

1936 evening hairstyle by Emile at Rockefeller Center.  “This style is best worn by the very sophisticated.”

Hairstyle by Charles of the Ritz, 1936. A “tailored” style for evening. The “flat curls above the forehead” are barely visible bangs rolled under at the hairline.

The final hairstyle in the article by Josephine Felts, Delineator, February 1936. You could write to her for more information.

This was certainly a time for “small heads” and tightly curled hair. However, I browsed for a few photos of real women and real hair in the same issue: 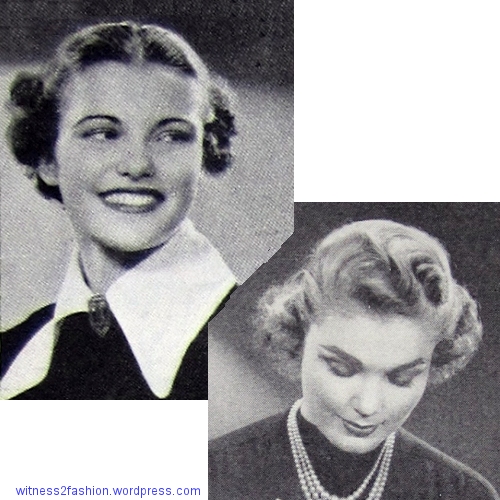 Delineator showed these young models in an article about the polite way to chew gum. February, 1936. The one on the left has the flat crown which suited 1936 hats.

In September of 1936 Delineator showed this model in an evening gown designed by Ruzzie Green.

Miss Vivian Dixon, a debutante, wears a much more natural looking hairstyle in an ad for Camel Cigarettes. 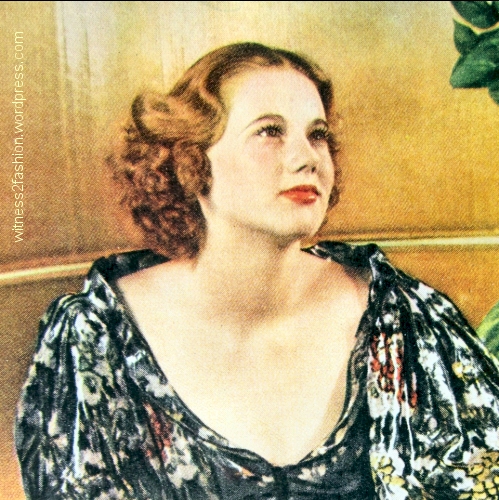 I believe a lot of young women who did their own hair must have looked like this model in Delineator’s “How to Sew” feature article: 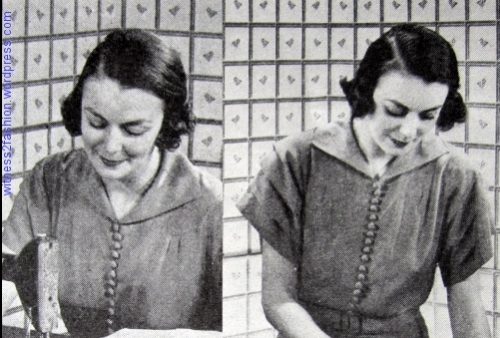 A model in an article about home sewing, February 1936, Delineator.

But illustrator Hans Flato showed a softer, looser hairdo in a series of ads for sanitary products: 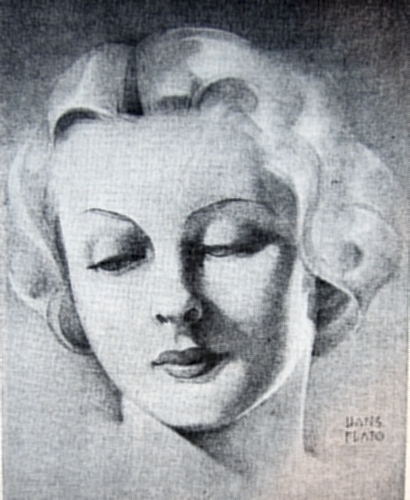 But one thing all these styles have in common, regardless of the age of the model, is the need to accommodate a 1930’s hat.

Elsa Schiaparelli’s hat designs were very influential in the 1930’s. Click here for a post about them, with many more pictures.