Three “bathing-suits” for women and one for a girl were featured in Butterick’s Delineator, May 1914. They were illustrated and described again in June, 1914.

Part of page 75, Delineator, June 1914. Headdresses/caps were included in the patterns.

In May, the text was arranged around the illustrations, which means I will have to cut and paste to fit descriptions into a 500 dpi format.  I will use the shorter descriptions from June, and put the longer ones at the bottom of the post for anyone who’s interested.

It’s entertaining to see how the “peg-top” fashion in dresses has been translated into a bathing-suit, however impractical!

A draped, peg-top skirt, very narrow at the bottom. The silhouette was said to resemble a child’s spinning top.

Butterick bathing-suit pattern 6894, Delineator, May 1914. The skirt has a “pannier effect.” The recommended fabric was silk, not wool. 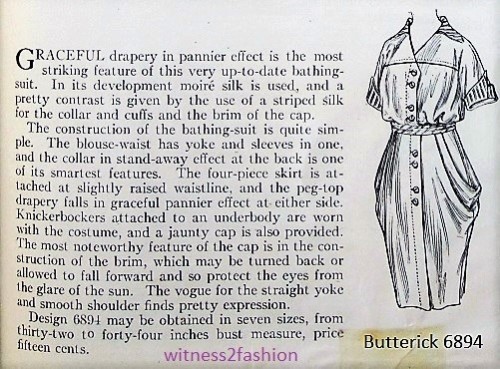 Butterick 6891 from May 1914, Delineator. Tunic tops over longer skirts were a fashion in dresses, here echoed in bathing suit.

Butterick bathing-suit 6891, alternate views; the sleeveless-topped knickerbockers would be worn under any version of the overdress. Headdress included in pattern.

Butterick 6891 description, Delineator, June 1914. “Raglan shoulders;” “knickerbockers attached to an underbody and a cap complete the costume.” In sizes from 32 to 44 inch bust.

Brilliantine was a lustrous fabric in 1914; later it was the name of a men’s hair dressing lotion that gave that “patent leather” shine. 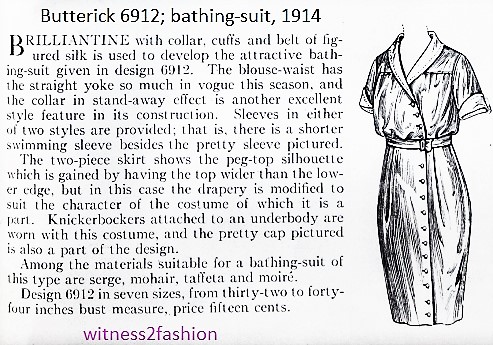 Description of pattern 6912, June 1914. Delineator. “The two-piece skirt shows the peg-top silhouette which is gained by having the top wider than the lower edge. Knickerbockers attached to an underbody are worn with this costume.

It’s notable that the under garment for bathing suits was called “bloomers” in 1910, but is called “knickerbockers” for women’s bathing suits in 1914.

A bathing suit for girls was also shown in May 1914: (Its under layer is still called “bloomers.”) 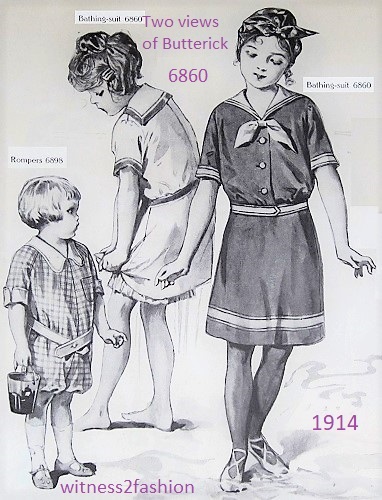 Left, a romper suit. Center and right: two views of Butterick 6860 bathing-suit for girls, May 1914. 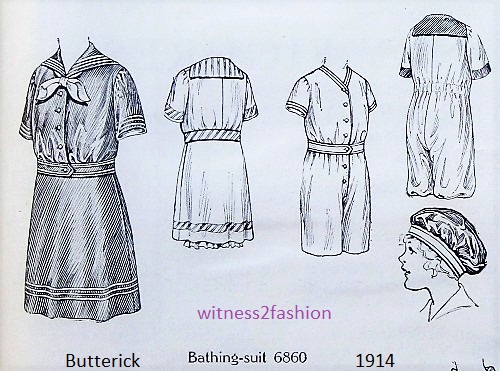 “Body and bloomers are in one, and the two-piece skirt need not be used if one wishes a simple swimming suit …. The bloomers may be straight or gathered at the knee with or without a frill.”

It’s interesting that girls (2 to 14) could wear this suit without a skirt — so they could actually swim. See the boys’ and men’s bathing suits from 1910.

These bathing suits would be worn with a “cap to match the suit, stockings of medium weight and canvas bathing shoes…. It is advisable to wear a close-fitting rubber cap under the bathing-cap.” 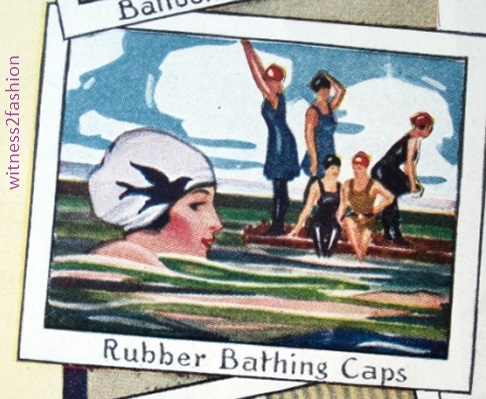 These “In the Swim” posts were inspired by The Vintage Traveler’s bathing suit timeline. For In the Swim, 1910, click here. EDIT: Links added 4/4/19.

For those who want every detail, here are the longer bathing-suit descriptions which appeared in the May, 1914, issue of Delineator. 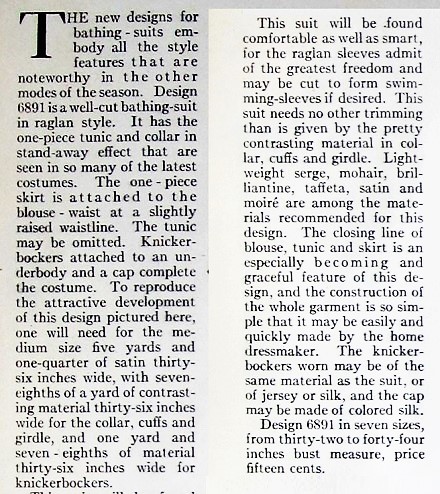 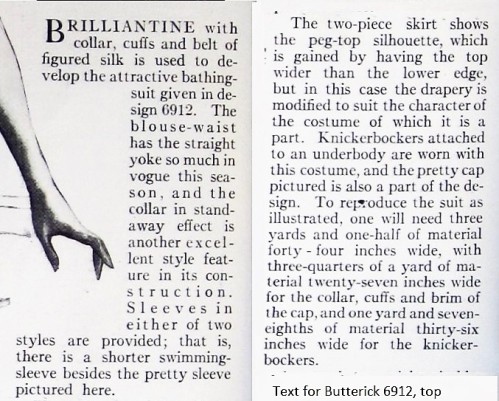 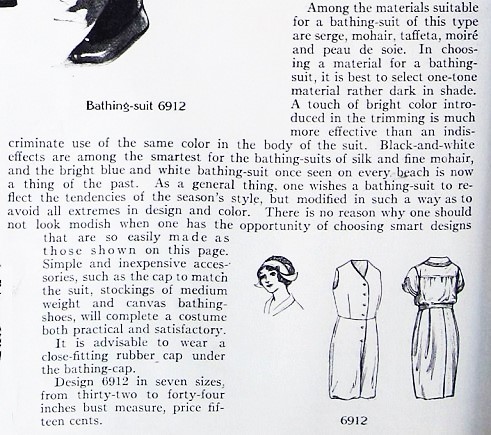