The many comments I read from theatrical costumers pointing out that our skills overlap —  but also differ from — couture, tailoring, retail fashion and dressmaking got me thinking about one costumers’ specialty that won’t show up in ready-to-wear:  transforming the actor’s body. [That is, transforming it to make it less attractive rather than more.]

Sometimes it is the costumer’s job to make a normally proportioned actress look like this . . .

. . . At other times we may have to eliminate all her curves so that she can play a male role.

Some while ago, I watched a TV show about people participating in a “CostumeCon.” One of the contestants was female, playing a male character, and she tried to suppress her breasts with adhesive tape. (Was it really duct tape?) It was so tight that she had to be extracted from it with scissors in order to breathe. Yipes! Theatrical costumers know there are better ways to do it. (Even researching bust binders from the 1920’s would have been a start!)

Unlike retail fashion and couture, it’s not always the costumers’ job to make people look more attractive. Over the years, as a designer and a costume technician, I have built costumes (these are just random highlights) to transform

I’ve never worked on Greater Tuna, but that show has two male actors playing all the characters in a small town, including ladies of a certain age and stoutness.

Sometimes a female character goes through several stages of pregnancy in less than two hours. (e.g.,  Stella in  A Streetcar Named Desire.)

Sometimes you have to turn a healthy actor into a seriously obese character, like Falstaff.

Operas often use mezzo-sopranos  or contraltos to play young men.  (These are called “breeches” or “trouser” roles:  Cherubino, Octavian [the Rosencavalier,] Hansel in Hansel and Gretel, among others.)

Sometimes you have to transform a matinee idol actor (e.g., John Barrymore, Lawrence Olivier) into Richard  III (called “Crookback,”  so “deformed, unfinished . . . that dogs bark at me as I halt by them.”)   In grand opera, Rigoletto, the court jester,  is also a man with a “hunch.”

Sometimes a trim young character ages into a plump, sagging, old one — as Queen Victoria does in biographical plays and movies. (And as Henry VIII did, except in a certain recent TV series ….)

And I mustn’t forget Charlie’s Aunt  (first performed in 1892) — in which a young man is persuaded to pose as a friend’s elderly aunt from Brazil in order to chaperone a meeting of proper young ladies and university undergraduates.

So, part of the costumer’s job is to figure out ways to accomplish these transformations, while giving the actor or singer complete mobility and as much comfort as possible.

Welcome to the wonderful world of “fat suits,” “birdseed boobs,” bust flatteners, “pregnancy pads,” and “body suits” — but not the kind popularized by Donna Karan!

If the transformation is to be believable — not a joke — you start with plenty of research. Life drawing classes frequently use models who would never appear on a fashion runway.

Life drawing of a model (watercolor), detail of back and upper arm. These folds of flesh can be duplicated in a body suit.

Observation of people on the street is also useful. In many cases, you need to consult a medical library to understand curvature of the spine, stages of pregnancy, or other medical conditions.

It’s almost impossible to build a good padded bodysuit without a dressmaker’s mannequin which has the same measurements as the actor. (We sometimes pad the mannequin itself, first, to be sure we are starting as “close” to the actor’s body shape as possible.)

The base of the suit is usually a stretchable leotard — with or without sleeves and legs, as needed. A “pregnancy pad” can be built on a scoop-necked, sleeveless leo, or even a camisole/tank top, but it needs a snap-closed crotch strap to keep it in place when the actor sits.

Traditionally “built” padded bodysuits use layers and layers of polyester fiberfill (the kind used for quilt-making), each layer cut and shaped to simulate belly fat, “love handles,” sagging pectoral muscles and fat, and even the fat accumulating on the back and shoulders. (Fat does not accumulate on the front of the body only.) Notice the back-of-neck and shoulder padding on this body suit, which changes a young, erect posture (the mannequin) into a flabby old man’s slouch. 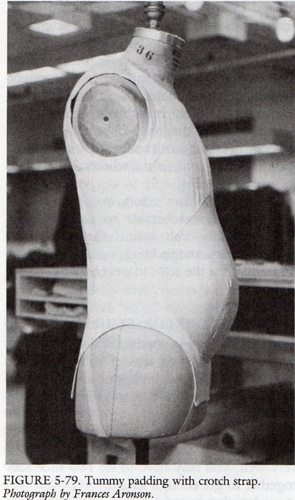 A padded body suit from The Costume Technician’s Handbook, by Ingham & Covey. Photo by Frances Aronson.

To build up the “fat,” costumers begin with the widest part of the bulge, cut a large oval of fiberfill, and hand stitch it securely to the bodysuit with stretch stitching (called cross stitch, herringbone stitch or catch stitch.) The first layer must be well secured, because subsequent layers, each smaller than the last, will be attached to the previous ones. The shape is built slowly, 1/4 or 1/2 inch of thickness at a time.

Not surprisingly, an actor wearing all this padding will sweat. Acting, especially on stage, can be very hard work. The suit will need to be completely washable — repeatedly washable, over weeks or months of use. That’s why it can take 40 hours of work to make an elaborately padded suit:  painstaking hand construction. The final shape is sealed in with another layer of smooth stretch fabric, hand stitched for definition. Sometimes it needs nipples and a belly button. And the final layer may be dyed to match the actor’s skin tone.  A zipper will need to be added, and a snap crotch. (Actors need to visit the restroom, just like everybody else.)

Really huge suits — for Falstaff, for example — can be built on a semi-spherical “cage” of boning and fabric, which stands away from the actor’s body and provides some air circulation. The realistic padded structure — belly, “man breasts”, etc. — is built up on top of the cage. Outdoor productions, which rehearse or perform in daytime, can put the actor wearing a padded body suit at risk of heatstroke, so every precaution and opportunity for cooling and hydration must be planned. (Sometimes this includes putting pockets inside the costume to hold ice packs.)

When we wanted to give a female character large and/or sagging breasts, without a complete bodysuit, we used to make a pocket in each large bra cup and fill them — but not tightly — with flaxseed, which simulates the weight and movement of breasts. Hence the term “birdseed boobs.” Modern silicone has been a big improvement — at least for filling part of the cups. One thing I learned from a friend: never, never put birdseed boobs into storage without removing all the birdseed . . . . Unless you want mice nesting in your costume storage area.

When You Need to Flatten Instead of Flatter. . . .

Many people have a mistaken idea that all opera singers are very large, like this Wagnerian singer of the past.

Not true. I worked with a lovely (in personality as well as looks) mezzo soprano who could have posed for a Petty Girl calendar. She sang the title role in La Cenerentola (Cinderella), but she also sang Hansel in Hansel and Gretel and Cherubino in The Marriage of Figaro — male roles. When you wear a C cup bra — or larger — just wrapping a band of “athletic support” elastic bandage around your chest, even if you put shoulder straps on the bandage, does not provide comfort and support. You need something that flattens the breasts without pushing them down or making a crease under them — something that supports and distributes the flesh to the sides, as “minimizer” bras do.

Lovely ‘Rochelle’ suggested a method she’d encountered at another opera company — a close fitting, V-necked, sleeveless shell — dyed to her skin tone — with boning on each side running up from just below the waist and over her bust points. (I made several boning channels.)  The boning pushed her breasts up and flattened them, so they looked like a man’s pectoral muscles.  After fitting the coutil shell (which zipped up the back) as tightly as we wanted, I opened the side seams, folded out a long wedge from just below her bust to the waist, and inserted a godet of elastic in each side seam to give her plenty of breathing room. (Some singers and Shakespearean actors learn to expand the ribcage at will, by several inches, creating a vacuum to suck in huge gulps of air.)

Recently, I was amazed to discover that the “Breeches role / opera flattener” we made decades ago had the same fan-shaped boning as this 1920’s bust flattener for older women (the one on the right:) 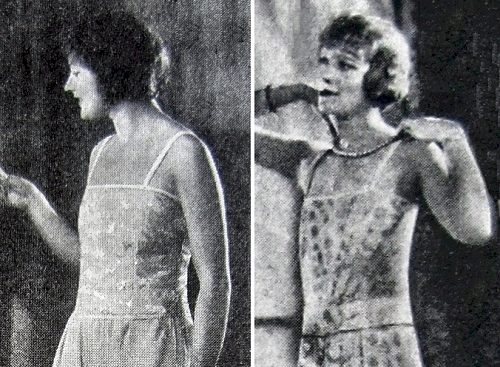 Ads for De Bevoise Bandeaux, May & April 1925. Both are made of stiff corset material; the one on the right is boned and designed to flatten a more mature figure.

Even if I did “re-invent the wheel,” my flattener was much more comfortable than Duct Tape!

Book Recommendation:  The Costume Technician’s Handbook, by Rosemary Ingham and Liz Covey, will tell you how to do many useful things, from corset construction to cartridge pleating and pattern drafting. Click here for more about this very practical book. There’s a whole paragraph about it at the bottom of the post.