In Part 1, I showed some Delineator pattern illustrations for Misses and Women’s dresses for September, 1926. The same issue had a second article about the importance of pleats [called plaits] — this time for larger women. 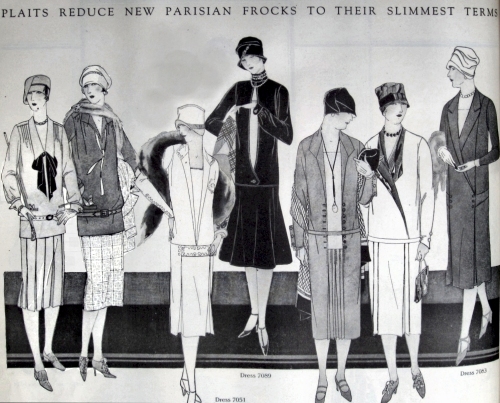 All but one of these Butterick patterns from 1926 is meant for larger-than-average women. The three on the right are for women with bust measurements from 36 to 52 inches, far from the boyish figure associated with 1920s styles. The four on the left are drawn, as usual, as they might look on women at the smallest end of their size range, not size 46.

The blouse patterns are new, but the skirt patterns’ numbers show that they first appeared in the previous year. The pleated skirt on the left came in hip sizes 35 to 49.5 inches. Skirt 6331 was available up to hip size 52 inches — equivalent to a modern size 28W. Most early twenties dresses had straight backs, with any flare or fullness in the front only, like skirt 6286, but that was changing by 1926.

Many mid-twenties illustrations show a decorative colored hankie peeking out from a pocket, like these. 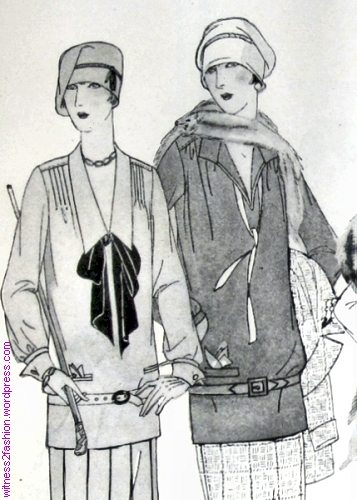 That narrow ribbon tie on # 7078 is slenderizing. These blouses were available for bust sizes 32 to 46, a little larger than the normal size range. They both have yokes with gathers or tucks adding fullness in front, unlike this similar design for Misses aged 15 to 20 “and small women,” which has no bust fullness. 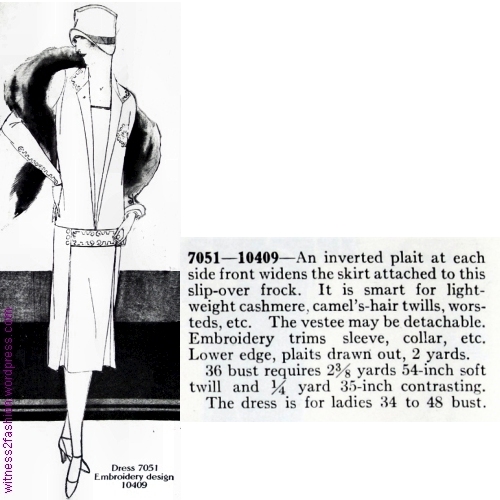 This dress was available up to bust size 48; whether the embroidered horizontal band across the front — widened further with decorative buttons — would be becoming to its wearer is questionable. The bodice insert giving the impression of an exposed slip is a “vestee” which could be removed for laundering. It could also be made of a contrasting fabric, like pattern 7089, below.

She wears a fairly lavish fox fur stole; even the woman wearing sporty blouse #7078 has put a pair of dead animals around her throat.

My mother (the former flapper) was very proud of her fur stole, which had baleful glass eyes and a hinged clip under the jaw, so that the little critters, like this one, appeared to be biting each other. 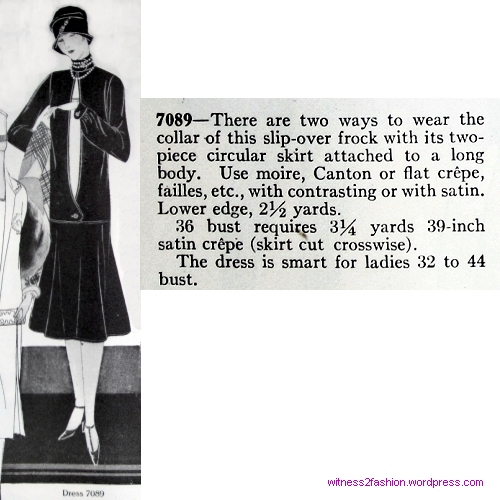 This dress, with a high collar that can be worn buttoned as shown, or open like No. 7051, features a long opening in the center front.

Butterick made this dress pattern in its usual range of sizes, bust 32 to 44 inches, roughly equivalent to modern pattern sizes 10 through 22. Her hat is trimmed with a very long jeweled pin.

These two patterns were not only available in large sizes, but were described as able “to thin down a stout figure” and “to make the least of a large figure.” I wouldn’t agree about the one on the right.

Number 7077 certainly does its best to create a long vertical area from neck to hem, drawing our eyes to the center, rather than the outline, of the body. Number 7016 has a diagonal “surplice” line intended to do the same, but the hip band and wide space between two sets of front pleats negates the effect. The top of the dress doesn’t really relate to the lower part. The evening gown below, also from 1926, came in sizes 36 to 48; here, the surplice line is effectively carried down into a side drape so your eye travels past the hip, rather than across it.

It’s hard to be sure if the hat on the right was made of the same fabric as the lapels on the dress, or not.  It could be fur. The woman on the left is wearing what looks like a magnifying glass on a long necklace, but it might hold a secret, like this one:

A vintage lorgnette, courtesy of RememberedSummers.

When you press a tiny button on the silvery filigree, it opens to become a pair of hand held-spectacles: 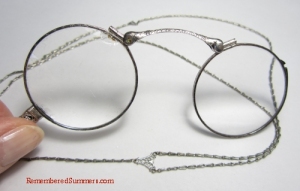 The image is curved and distorted because it was photographed from a thick, bound periodical volume. In spite of this garment’s princess seams, the model is drawn as if wearing a bust-flattening corset or corselet.

She, too, carries a fox fur piece.

One pleasure of Delineator pattern illustrations is the carefully drawn accessories, like these hats:

A selection of hats from September, 1926. Delineator magazine.

Folds, droopiness, and tiny brims can also be seen in the hats from Part 1. Click here.