Unexpected Styles for the Expectant, from Vogue, 1924

What do these outfits have in common? 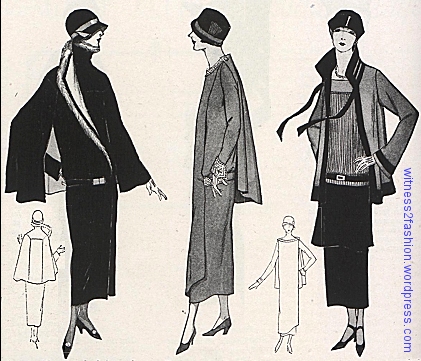 That’s right. These are illustrations of maternity fashions which could be purchased or made to order. 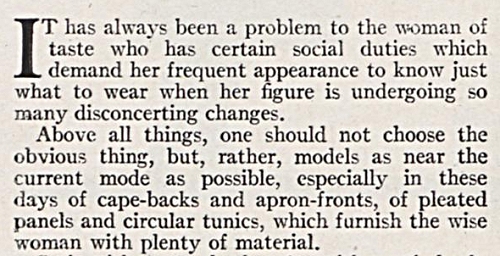 The idea was to dress, not in clothing designed specifically to provide comfort and convenience for an expanding body, but in clothing which resembled — and sometimes was — current off-the-rack or made-to-order fashion. (Even in the 1960’s, good quality department stores assumed that garments would be altered to fit the customer. Men’s departments offered tailoring service — trousers often came unfinished, and jackets were expected to need sleeve-length adjustments. In the twenties, women’s clothing received the same personalization from a staff of skilled seamstresses.)

Vogue’s advice for mothers-to-be in the nineteen twenties was to dress normally, in larger sizes, and choose styles with elements that distracted from the abdomen. Hence these elaborate collars and scarves:

(Left to right) “Lingerie collars of satin, batiste, crepe, or pleated crepe or batiste are easily made and soften a dark cloth neckline.”

“Draping, pleats or panels should not be placed where one is inclined to be largest, but always either above or below that point…. Brilliant colors should be avoided, except perhaps in small accessories…. It is always wise, both from the point of view of health and of appearance, to avoid high heels…. The individual figure should be studied before purchasing a costume. The tight, flat back, however, must always be avoided…. For one, the  apron-front is not so appropriate as the cape-back, while for another, a blouse or panel-back is most becoming and the apron-front is essential.” — Vogue, February 1924.

Vogue’s maternity articles, in February and August of 1924, mostly illustrated clothing that could be purchased from Lane Bryant or Mary Walls. Mary Walls’ shop was located in the Waldorf-Astoria Hotel. She made authorized copies of French designer clothing.

The cape at left, below, was available in coral red, beige, or French blue kasha [a kind of wool;] Vogue allowed the wearing of “brilliant color” in the case of the cape. 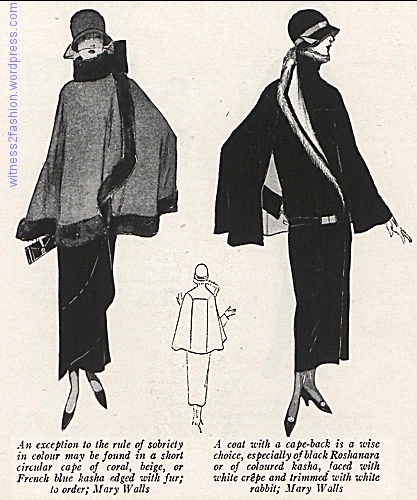 Designs available from Mary Walls which could be adjusted for maternity wear [up to a point.] Vogue, Feb. 1924.

Notice the cape-back on the coat, and on the dress below:

More back emphasis. The wrap dress, left, is from Lane Bryant. The pleated suit at right is from Mary Walls. “Pleats or panels should not be placed where one is inclined to be largest, but always either above or below that point….” [Presumably the blouse in “flame” is not recommended for maternity wear.]

Left, the “fichu-collar” seems designed to accentuate a baby bump, but Vogue recommended it as a distraction. The “apron-front” was suggested for some, but not all, pregnant figures. A surplice line dress (like that at right)  was often recommended as slenderizing.

“Pleats are to be depended on for disguising the figure.” I can’t imagine that any figure was enhanced by the maternity dress on the right, but it was sold by Lane Bryant, who pioneered maternity clothing. Incidentally, the inclusion of so many Lane Bryant maternity fashions in Vogue articles, illustrated alongside clothing from a top New York custom shop, makes me think of Lane Bryant customers in a new way. [Of course, Lane Bryant was a regular advertiser in Vogue….]

“The models on this page are all adaptations of the mode, and while they are for maternity wear and are made invisibly adjustable at a low waist line by means of elastic and snaps, they are not necessarily maternity models; in other words, they are clothes that any one might choose for chic.” — Vogue, Feb. 1924.

Vogue ran another article on maternity styles later in 1924.

“Tea-gown or informal dinner-gown.” Details from a maternity fashion article in Vogue, August 1924.

The “frock” at left plus the coat at right is a “three-piece costume,” so the frock may be a two piece outfit.

The fourth illustration from “Maternity Wardrobe Meets the Mode”, Vogue, August 1924, p. 56. There is as much fullness in the back as in the front.

Capes, pleats, and restrained colors — black, brown, cocoa, and navy blue — are still the editors’ choice for expectant mothers in 1924. Again, the importance of choosing shoes for safety and comfort (and correct fit on swelling feet) was emphasized. In February, Vogue also proclaimed that “no woman should go without a corset at this time, even though she does not ordinarily wear one, for the support is absolutely necessary.” But I’ll leave the subject of maternity corsets for another day.