Photos of Summer Dresses, circa 1919

I can date this photo, because my mother is second from the right in the back row. Her family took another photo of her holding her diploma, and wrote on the back, “May 1919.” 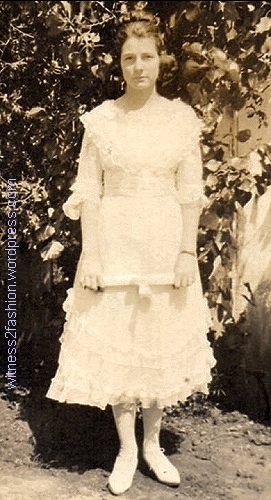 Eighth grade graduation day, 1919. I “pushed” the photo to clarify the ruffles on her dress, which aren’t all visible in the overexposed  photograph. 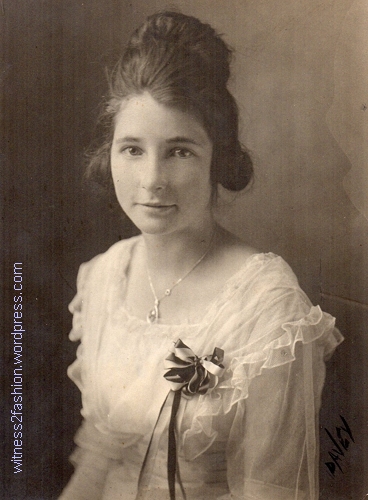 14 year old girl in her graduation dress, 1919. She has a ruffled “Bertha” collar, and the fabric is very sheer, probably netting. I’ll discuss the hairdo in a later post.

All these dresses are so lovely that I wanted to share them. I even know some of the students’ names. 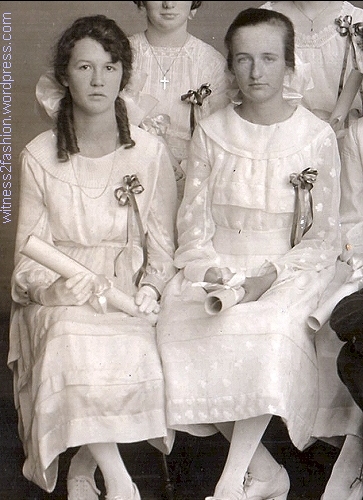 I don’t know the girl who is second in the row, but the sheer fabric of her dress, with an opaque pattern woven in, is my favorite. [I once had an extravagantly expensive Swiss cotton nightgown from similar fabric.] Note how many of these girls have big bows in their hair — they are still children.

Almost every dress is trimmed with horizontal tucks, which create the effect of opaque stripes across the sheer cotton fabrics. Notice their crossed ankles. This was how a lady sat. I believe these girls were graduating from a Catholic school run by nuns, so lady-like posture was enforced. 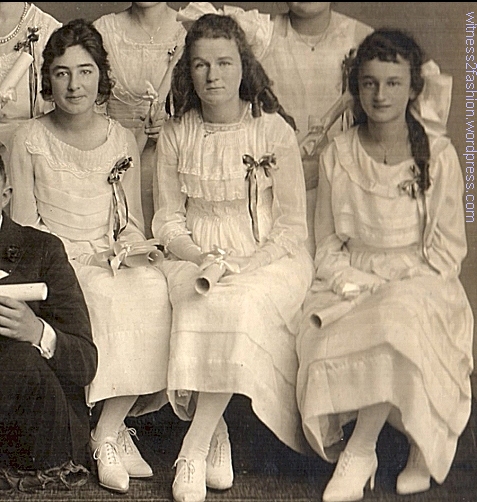 Most of the dresses have a rounded, scooped neckline, but Frances, like some of the girls in the top row, has a high, square-ish, lace-trimmed neckline.

Left, my mother; the girl on the right is unnamed (and slightly out of focus, too.) In front row are Frances Flynn and “Elinore” Larrouy. 1919.

I was delighted to find that someone had written the names of several of these students on the back of the picture, because my parents remained in the same town, and I knew many of their friends, including some of the girls in this picture. Sadly, I have no idea who the lovely young woman at the center of the back row is.

The girl in the center looks older than the others, or perhaps just more poised, in her beautifully embroidered dress and string of pearls.

Angie Piano remained a friend to my father and me in the years after my mother’s death, as did Frances Flynn, who wore tailored, non-fussy clothing, often dressed in slacks, was great fun to be with, and took us huckleberry picking at her family cabin in the Coastal hills. (Stepping into a packrat’s nest was always a bit of a shock, but the contents were fascinating!) The cabin was a bit of a time machine in the 1950’s, with a sleeping porch, an ice box, and a water tank that collected cold spring water;  we depended on oil lamps when we couldn’t get the electricity generator started.

Angela (or Angelina) Piano, called “Angie.” Note her hairstyle, which is long in back, but has chic puffs of shorter hair over her ears. About 1919-20. 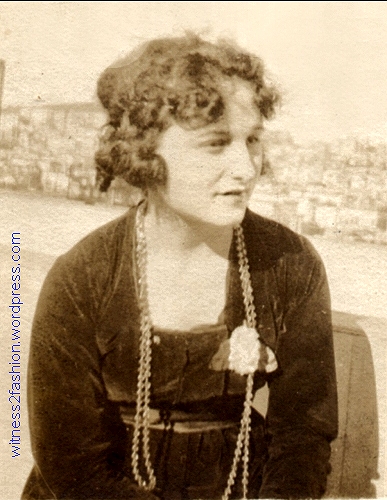 Angelina Piano in a velvet dress and long “crystal” necklace. On the back of the picture is her address in San Francisco and her age, 15. Dated “April 4, 1920.”

Elegant “Angie” Piano was still chic and charming in her fifties — in fact, I hoped my widowed father would marry her.  She did take me to the ballet in the 1950’s, when I was about ten years old, and she fixed us a memorable dinner of crab and spaghetti! Between Angie and Frances I had two good but very different role models.

I like two things about about this photo. The first is that it shows a range of clothing — Edith is wearing taffeta and wonderful high boots, Aunt Dorothy is in her school uniform, and my mother is wearing a casual sleeveless pullover sweater. The second thing I like is that it shows how far from high society these girls were. They are standing on a dirt path in somebody’s back yard. Behind them is a fruit tree in a small vegetable patch, and on the left, a clothesline.

I’m not sure of the name on this picture — but I do like her dress ( with another Bertha-type collar) and her face. I wish I’d known her, too.