Tag Archives: make do and mend

“Make Do and Mend” 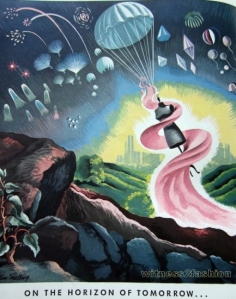 The Vintage Traveler printed a link to Nancy Hill’s very well-done TED lecture on “Make Do and Mend,” a way of life during World War II in the U.S. and in England. Thank you to Worn Through for blogging about this video!

Both countries passed strict laws about how much fabric could be used in a dress or suit, and issued a limited number of clothing coupons per person per year. This included shoes and other garments. When you bought a pair of shoes, for example, you had to pay with money and with the appropriate coupons. 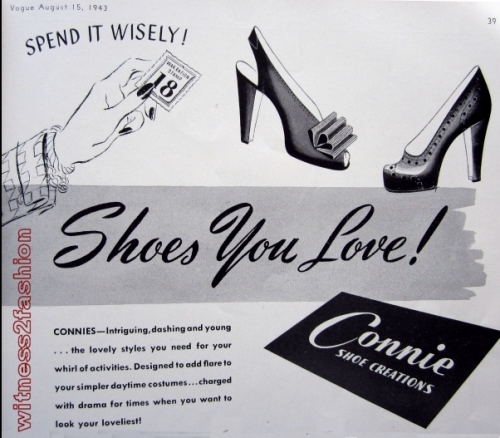 Since fabrics like silk and nylon were needed for parachutes, etc., synthetic versions were much in demand. Another ad from Vogue, August 1943 makes that point visually: 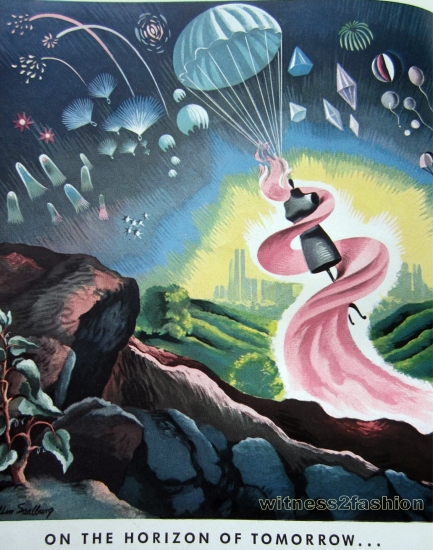 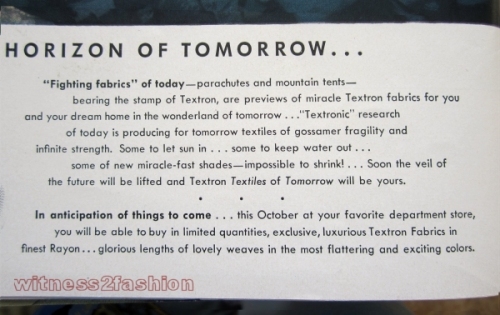 The text announces that “This October at your favorite department store, you will be able to buy, in limited quantities, exclusive, luxurious Textron Fabrics in finest Rayon … glorious lengths of lovely weaves in the most flattering and exciting colors.”

Women on the March, Women in Uniform

Many women were taking on jobs normally reserved for men; not ‘just’ shipbuilding and work in munitions factories, but also ferrying military planes, serving as army nurses, etc. 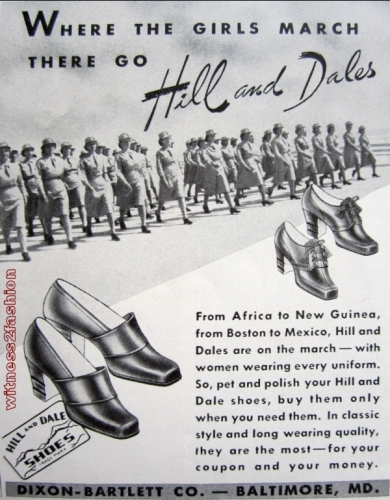 This ad for Hill and Dale shoes says,

“From Africa to New Guinea, from Boston to Mexico, Hill and Dales are on the march – with women wearing every uniform. So, pet and polish your Hill and Dale shoes, buy them only when you need them. In classic style and long wearing quality, they are the most – for your coupon and your money.” In the case of shoes, “pet and polish” was the equivalent of “make do and mend.”

Even the Duchess of Devonshire Made Do and Mended 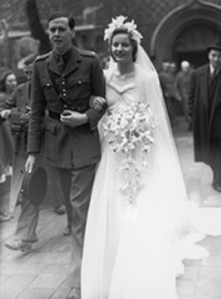 In England, rationing continued until 1954.  Of course, wealthy people could buy things on the black market, but many women who had sons, husbands, brothers, fathers, and friends serving in the military refused to cheat the system.  Deborah,  Duchess of Devonshire, née Deborah Mitford, tells a lovely story in Counting My Chickens, about her mother-in-law and a friend who had been “Making Do and Mending” throughout the war and after it.  When their husbands were sent to Paris on a diplomatic mission in 1947, these ladies, used to wearing couture before the war, accompanied them.  Christian Dior’s New Look was ‘all the rage,’ so they were eager to see the collection.  But, when they presented themselves at the Dior showroom, wearing the same mended shoes and worn cloth coats they had been using throughout the war, they were refused admission!  So the Duchess of Rutland and the Duchess of Devonshire sadly ‘ate their sandwiches on a park bench’ and returned to the British Embassy.

Dowager Duchess of Devonshire at Chatsworth

If you are not familiar with the marvellous “Debo,” Dowager Duchess of Devonshire, I highly recommend her books. She writes as well – and with as much humor –  as her famous sisters, Jessica Mitford (The American Way of Death) and Pamela Mitford (Love in a Cold Climate, The Pursuit of Love).  If you are a fan of Downton Abbey,  Deborah Devonshire can tell you what it’s really like to live in a great house – Chatsworth— with 200 rooms.  One of her tips: Never forget where you put down your reading glasses or your car keys….