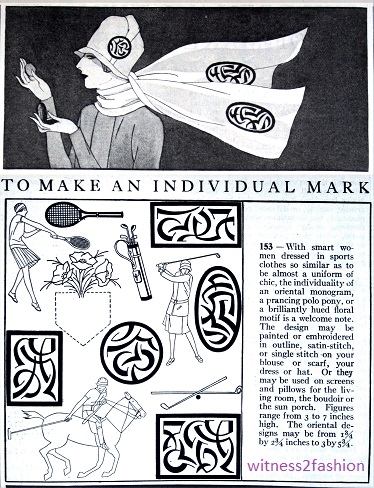 Butterick embroidery transfer 153, from Delineator, May 1927. 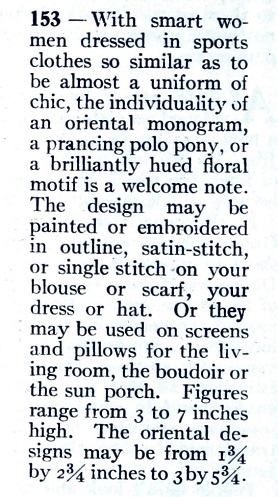 The oriental motifs on the scarf look a bit bigger than 5 3/4 inches…. Artistic license, presumably. 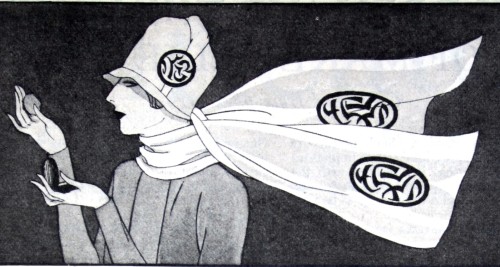 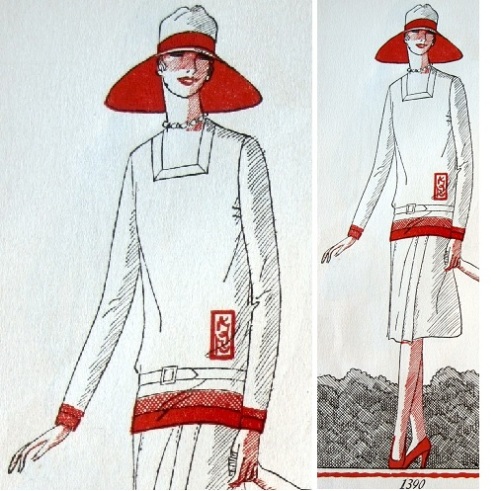 The vaguely “oriental” embroidery on this dress from May 1927 is the top right design from Butterick 153, rotated to the left. Butterick 1390. Delineator.

But for me, the delight of this particular set of transfers is the women playing sports : tennis, golf, and polo. 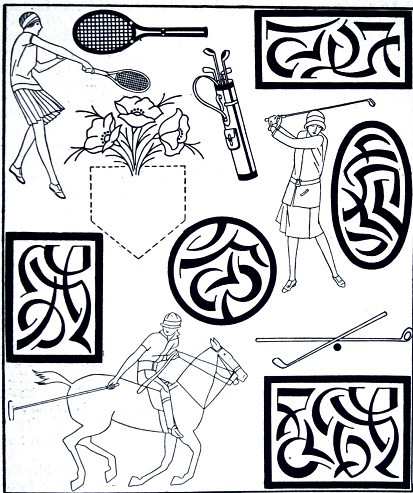 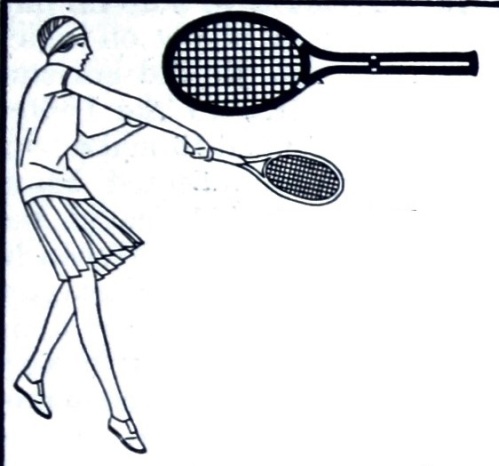 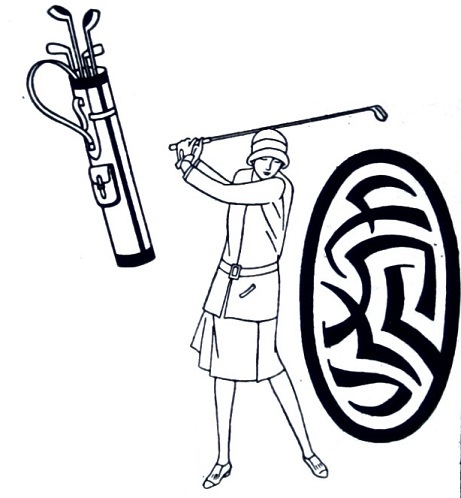 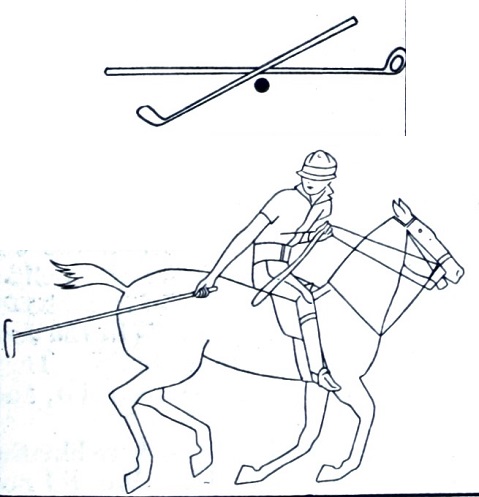 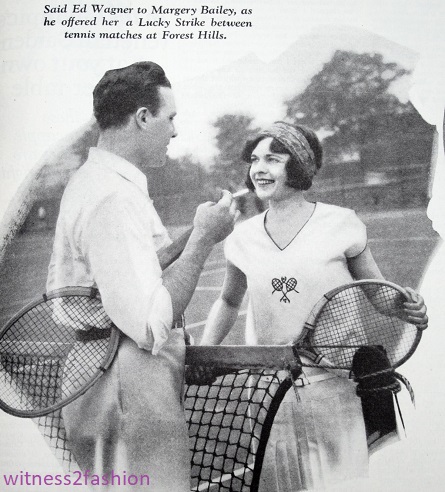 Tennis players in an ad for Lucky Strike cigarettes, Nov. 1927. “You, too, will find that Lucky Strikes are mild and mellow,” said Ed Wagner to Margery Bailey. 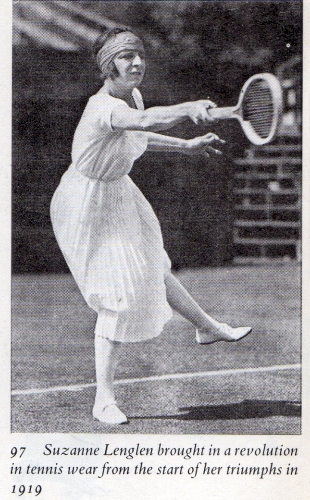 Tennis champion Suzanne Lenglen wore many outfits designed by couturier Jean Patou in the 1920’s, which helped to popularize his sporty sweaters and skirts.  Lenglen first appeared at Wimbledon in Patou’s short white silk pleated skirt and a sleeveless cardigan in 1921. According to Brenda Polan & Roger Tredre, her outfit created a sensation and introduced the sporty, boyish look known as the “garçonne.”

Patou took credit for shortening skirts to the knee in 1925; he was one of the first designers to put his monogram very visibly on his designs — monogrammed cardigans, scarves, etc. This was a clever move, since without the stylized  JP monogram his relatively simple sportswear — sweater, skirt, and matching scarf — would not have proclaimed its price. [Sometimes I’d like to go back in a time machine and strangle Patou, but then I realize that somebody else —  probably his arch-rival, Chanel — would have invented the merchandising of monogrammed “Designer” everything if he hadn’t done it.] For a concise history of Patou, see The Great Fashion Designers, by Polan and Tredre. 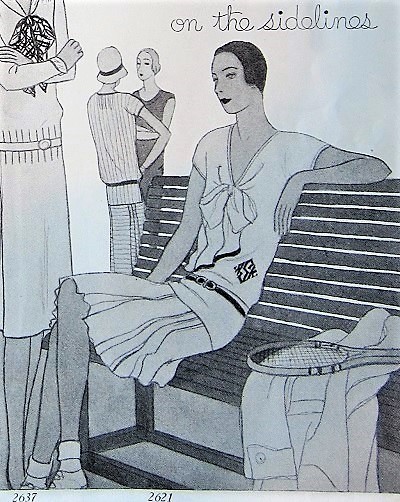 After Patou popularized monogrammed sportswear in the 1920’s, Butterick’s Delineator magazine showed monograms or other embroidered motifs on many of the patterns illustrated. 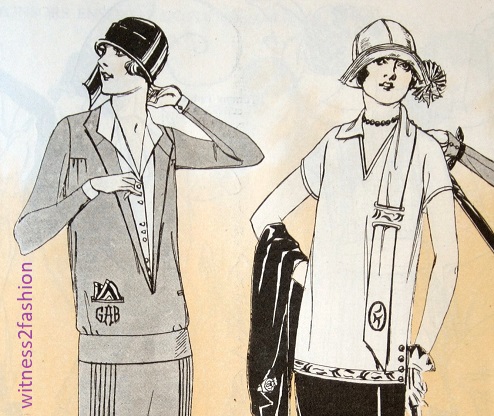 Monograms on Butterick patterns from October 1924. On the left, GAB; on the right, JK.

Monograms in vaguely “Chinese” lettering were popular, as was stylized lettering that created a spot of interest on an otherwise simple garment. 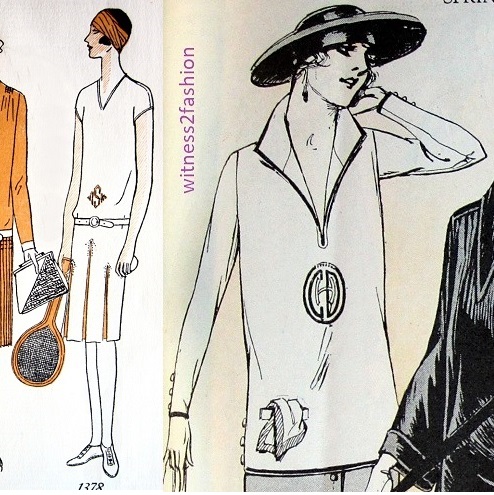 Monograms in April 1927 and 1925. The dress at left uses the monogram letters below; three letters (R S K) create a diamond shape. 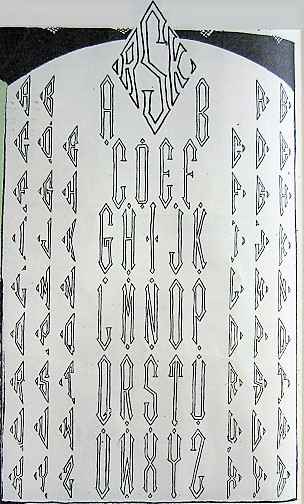 Butterick lettering transfer 10309 could be used to make a diamond-shaped monogram: one large letter between two smaller ones. January 1925. 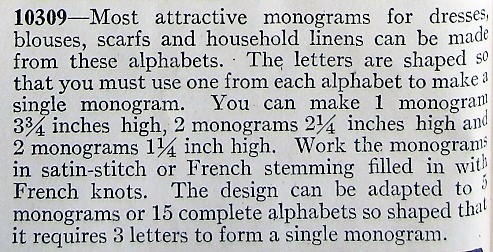 Letters in the shape of Chinese brushstrokes were also chic: 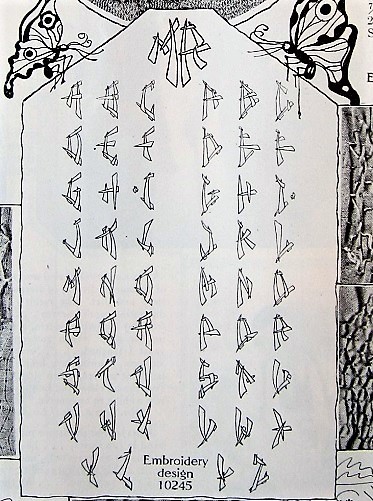 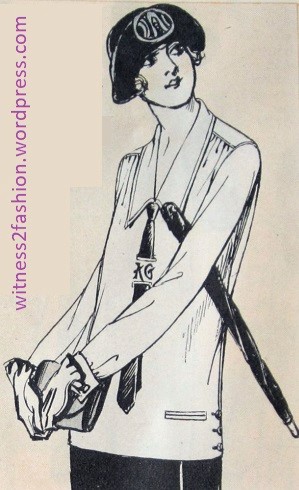 The monogram on this Butterick blouse says “AG.” September 1924.

Although completely unlike the other designs from Butterick transfer 153, this idea of embroidering a posey of poppies as if the flowers are emerging from a pocket is still charming: 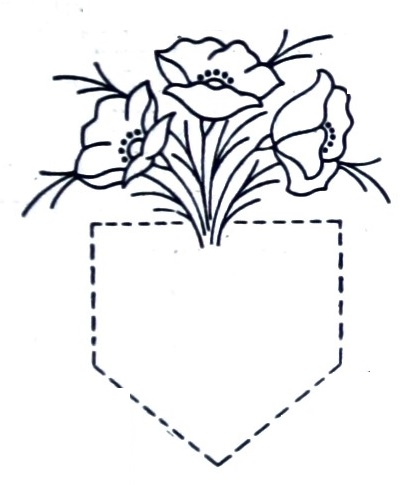 A bunch of embroidered poppies seems to grow from the pocket of a dress or blouse. 1927. This design could be an applique, too.

Note: I quoted the passage about Patou and monograms from a previous post about tennis and fashion. Click here to read more.

It was customary, in three-letter monograms, to put the initial of the last name in the center, in a larger size, with first and middle name initials on either side. The monogram of Betty Louise Smith would be B S L.