1950 Aprons for Barbecues and a Happy Marriage

McCall’s featured these apron sets for men and women in at least two 1950 catalogs. I’m not sure how many men barbecued while wearing suits, but they certainly barbecued while smoking cigarettes. (See below.) The pattern on the left, #1481, is described as “Mr. & Mrs. Happy Marriage Aprons.” 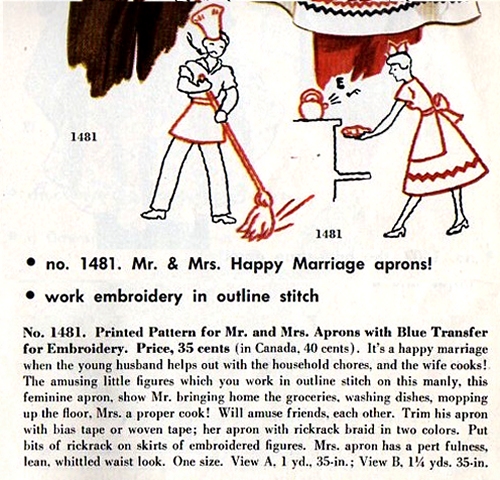 The happy marriage aprons show the husband doing the grocery shopping, washing the dishes, and mopping the floor. The wife does the cooking, the ironing, and the dusting. Not a bad division of labor, for 1950! (Uh-oh. These aprons “will amuse friends, each other.” I bet a lot of them were wedding shower presents, intended to get a laugh.)

“Mrs. looks so barbe-cute in hers, with appliqued dachshunds, a toasting hot dog. And the pig chef appliqued on man’s apron will barbe-cure Mr. of hot coal shyness.” Because of strong anti-German sentiment during World War I (and WW II), dachshunds were sometimes called “liberty” dogs, “weiner” dogs, or “sausage” dogs. [cf. “freedom fries” nine decades later.]  In the fifties, my family called dachshunds “weenie dogs.” This 1950 catalog indulged in a lot of puns when it came to aprons and tea-towel embroidery transfers.

“Mr. Never-go-near-the-kitchen will hustle to help if he’s wearing his own so-mannish apron.”

The McCall’s Needlework Catalog also offered a set of 8″ embroidery transfers suitable for dish towels or pot holders. [Big dish towels made from bleached flour sacks were often embroidered and sold at fund-raising bazaars. I’m still using some that I inherited 30 years ago; thousands of trips through the wash have made them lint-free and very absorbent — not at all like the small, not-very-absorbent ‘dish towels’ made from looped towel fabric that are common today.]

A set of big dish towels embroidered with these charming, cartoonish French chefs would still make a great gift! However, the copyright is probably still held by McCall’s, now part of Butterick, so I do not recommend making them for sale! Bon appetit! 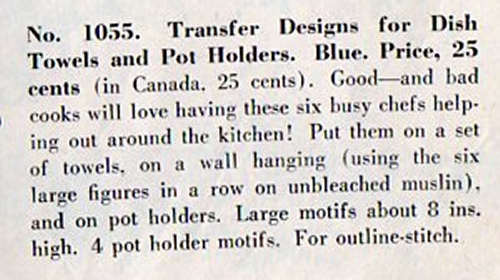