In the 1920’s, people loved masquerade parties, and they didn’t wait for October to play dress-up. However, as Halloween approached, Butterick’s Delineator magazine showed whole pages of costume patterns for adults and children. 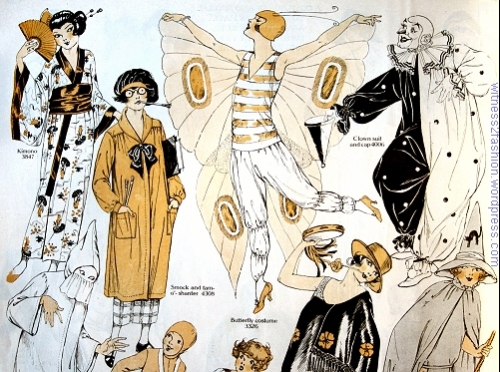 Butterick costume patterns, Delineator, November 1924. (The magazine would have come out in October.)

Then, as now, some people dressed to look glamorous, or to express their inner child or alter ego. Clown costumes were popular, as were costumes with an international flavor:  Spanish, Dutch, Turkish and Japanese are shown here. So is a little girl in a “Ballet Costume” — still a popular choice for little girls after 90 years. And, specifically for Halloween, “fantastic creatures” like brownies and witches appear. The all-white costume at far left is described as a ghost, but called a “domino,” a completely inaccurate reference to the masks and capes worn in Venice in the 18th century.

Starting with the costumes from the top of the post: 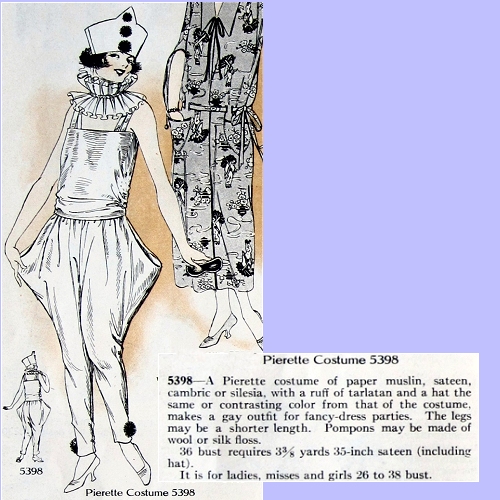 Pierette costume for ladies, misses and girls, August 1924. Butterick 5398. This is a slightly different illustration from the one at the top of this post.

Pierrot and Pierette — usually dressed all in black and white — were popular in fiction and art. Pictorial Patterns offered a Pierette costume with wide-hipped pants, like this one. Click here to see it. So did other pattern companies. Click here. It reminds me of 1917 skirt styles.

Dressing like a little girl was easy (and showed your knees.) Comedienne and singer Fanny Brice  played a “little girl” character in the 1930’s, and, in a later period, Lily Tomlin’s Edith Ann character delighted audiences by telling the truth — as she saw it.

My grown up aunt — far right — was the hostess at this party.

At least one of her guests came in a different costume! 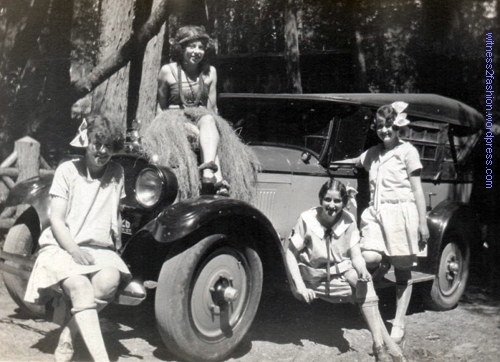 Tommy Tiptoe was a children’s book by Harriet Ide Eager, published in  1924. This costume is based on the book’s cover illustration. Click here. 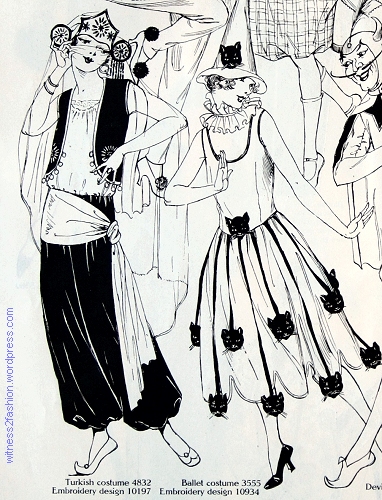 Butterick embroidery transfer 10934 can be seen here. Perhaps these heads are stuffed, rather than completely flat? This can also be made as a “Pierrette” costume.

This devil costume was illustrated in September and again in October, 1924.

Butterick pattern for a Devil Costume. This illustration is from the September issue of Delineator, 1924. It looks like a stage costume — pseudo Elizabethan.

“If he would look like the very devil, a man or boy should wear the jacket, trunks, cape and hood of this Devil’s costume. Make it of sateen, mercerized fabrics or lining satin with velveteen bands, etc., paper muslin or cambric with contrasting shade of same material for bands, etc. …This costume is for men and boys  28 to 40 breast.”

The kimono costume’s number shows that it was released before the Halloween season — probably for amateur productions of The Mikado or Madam Butterfly. The artist’s costume — or at least the illustration of it — is absolutely my favorite. That’s not a cigarette holder in her mouth — it’s a paintbrush.

And, speaking of butterflies: Butterick 3326

Pineapple cloth was sheer, and originally made from pineapple fibers. Let’s hope she didn’t have to spend the entire evening holding her arms up like that! This identical Butterick pattern was still for sale in 1929. Click here.

Tarlatan is a stiff, loose woven fabric. Heavily sized, it was used for petticoats and costume ruffs.   Malines is “a fine stiff net with a hexagonal mesh.” “Silesia” was a twill fabric used for pockets and linings — and therefore, inexpensive.

This unconvincing ghost (with unfortunate hints of the KKK in its pointy head) is quite different from the usual sheet-with-eyeholes ghost. (How disappointing to think that high heels will be required after death….) She is accompanied by a Brownie:  the kind of elf that comes and does good children’s work while they’re asleep (If only…!) and a little ballet dancer. 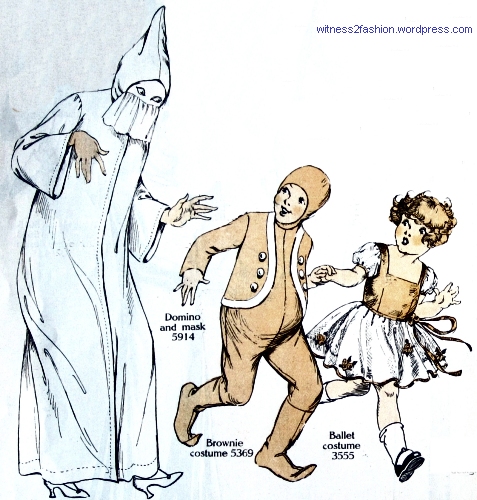 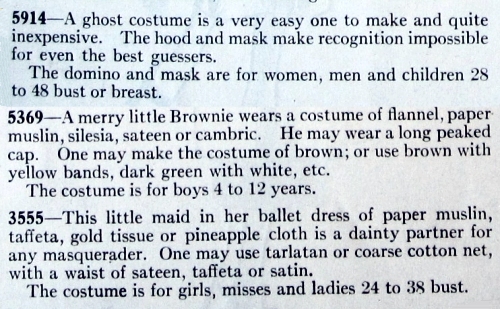 The freedictionary.com  says that “paper muslin” is “glazed muslin, used for linings, etc.” Whew! That’s a relief. No Paper Costumes, ever! Please!

For an improvised Spanish dancer costume, many people already owned an embroidered Spanish shawl, often decorating the piano, and decorative Spanish hair combs were also very popular around 1920. Rudolph Valentino danced the tango in Four Horsemen of the Apocalypse (1921), which may have something to do with the craze:

The seated woman has a black mask — a domino — in her hand.  In 1924, as in 2015, movies and popular entertainment influenced our Halloween costumes.