Glamorous Turbans in the 1920s 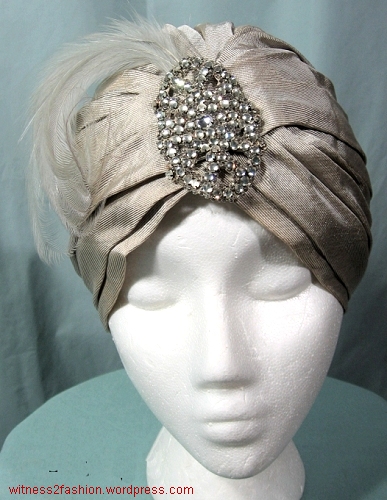 [8/24/14 Correction:  Thanks to Christina — see comments —  for pointing out that, based on interior construction and the label,  this is probably not an authentic 1920s turban, but a 1970s version.] 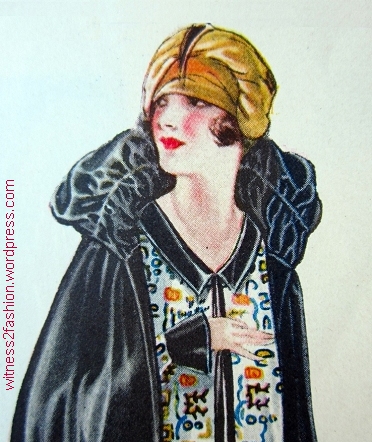 I associate turbans with Paul Poiret, cocoon coats, and evening wear, but they remained fashionable throughout the 1920s, and were worn with day dresses, as well as with evening clothes. This turban is being worn with a bathing costume in 1924: 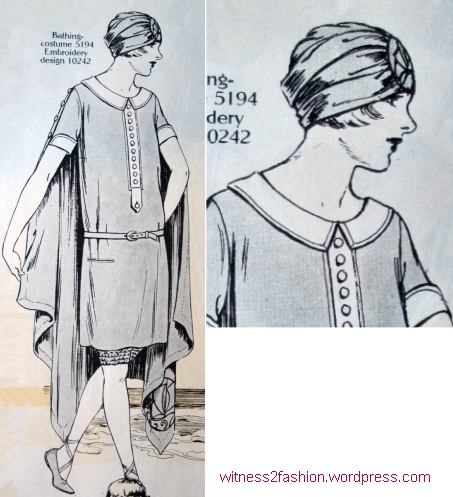 Butterick sold the pattern for this turban, #4748, in 1924 [the number dates it to late 1923,] and illustrated it being worn with simple day dresses and more formal outfits: 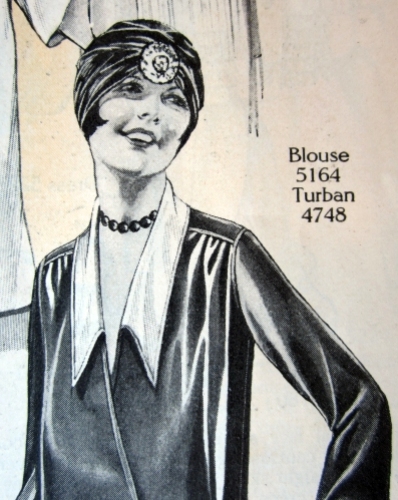 Butterick #4748 with a satin blouse; this is office or afternoon wear, but it is not an evening dress; satin was often worn in the daytime. 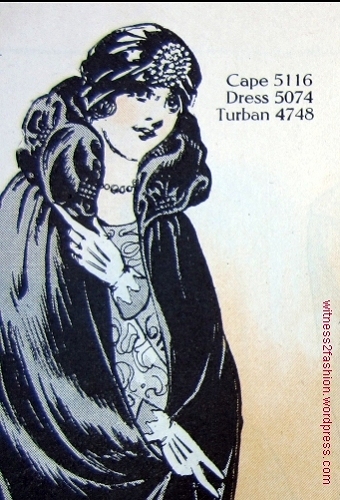 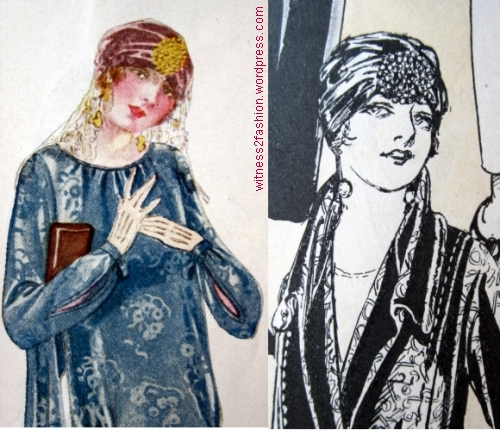 Turbans were worn earlier in the 1920s, too. Remembered Summers shared this photo of her mother, dated 1921. This turban is being worn with a summery white dress, by a 17 year-old girl. 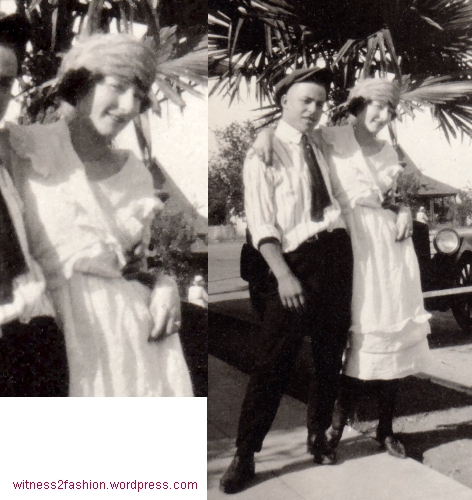 (These young people eloped at about the time of the photo.) Her turban doesn’t have a feather — they are posed in front of a palm tree, and those are palm fronds.

This “turban hat of twisted ribbon” by Paris milliner Marcelle Roze was featured in Delineator magazine in May, 1924. It’s definitely more structured and hat-like than the turbans made from pattern #4748. 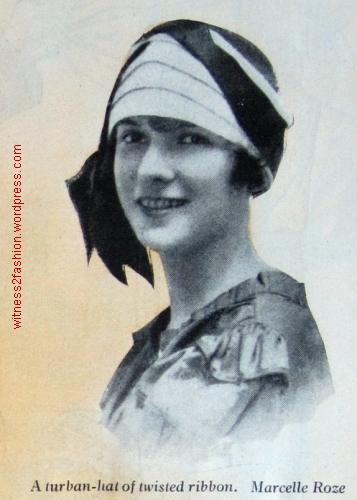 This turban was shown with a day dress in the summer of 1925: 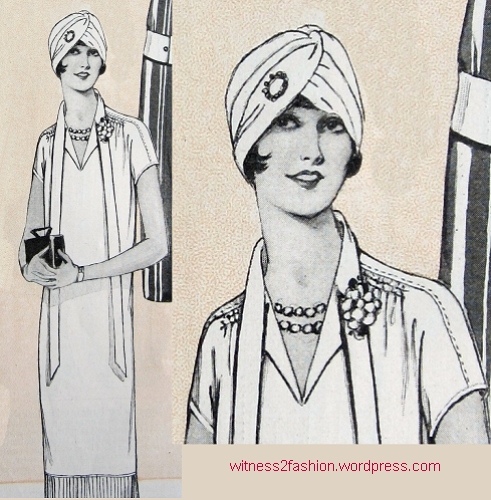 A new turban pattern, Butterick #6634, was shown with a dress suitable for stout women; Summer, 1926. 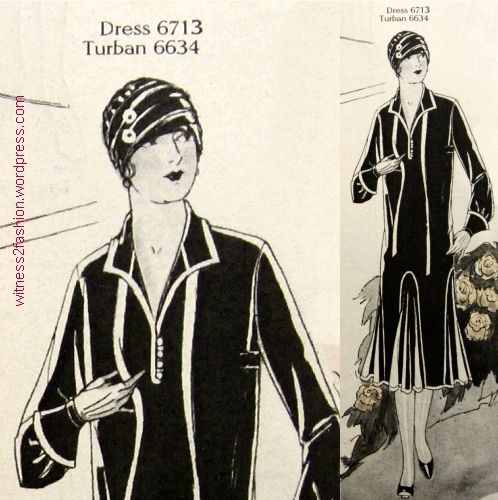 That doesn’t mean the turban was going out of style. This gold lamé turban by French designer Agnès was illustrated in 1929. The jewelry is by Patou. The illustrator’s initials are D.R. 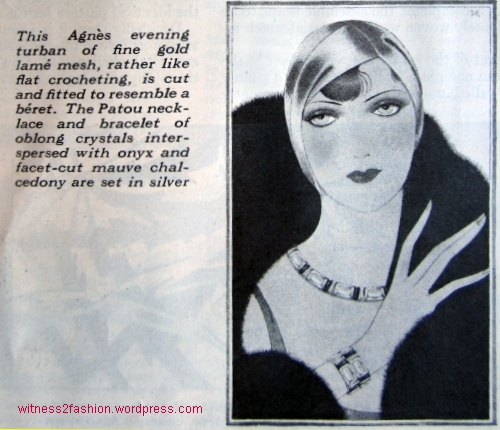 Which brings me back to this beautiful silver lamé turban from the collection of a friend. 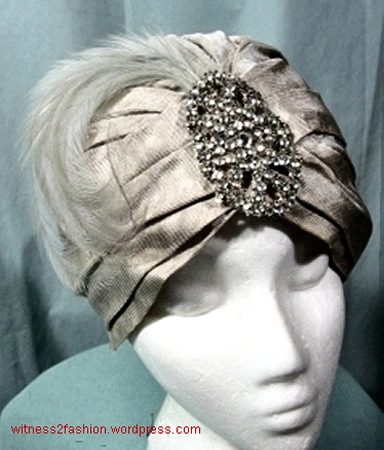 Styr0foam wig heads are smaller than human heads, so this turban would fit a person snugly and smoothly. The jewel was enormous, sparkly, possibly paste, and hard to photograph — it was not dulled or darkened. The silver fabric was not noticeably tarnished. The feathers were soiled and worn; I think they were white, rather than gray, originally. They may have stuck up more when new.

Silver lame turban by Miss Dolores. Top and Back view.

You can see the small piece of cloth at center back that comes from inside the hat to cover the fabric joins. 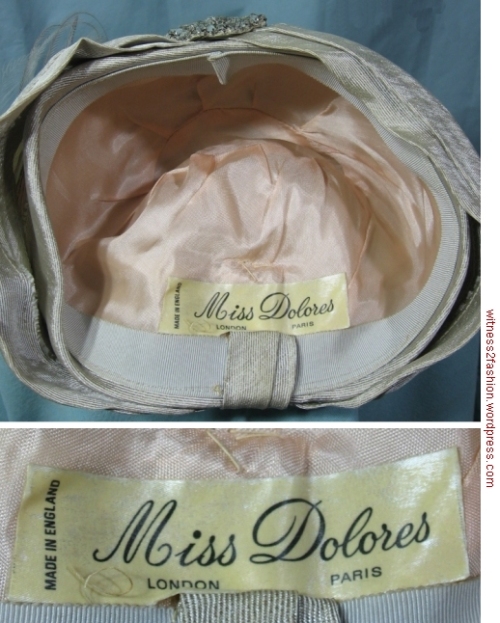 The brand name, Miss Dolores, of London and Paris, was apparently still appearing in felt hats in the 1980s, judging by the few photos I have found online, but this turban seems to be a 1920s style. I couldn’t find out much about the Miss Dolores label, but everything about this hat — with the exception of the “Miss Dolores” script — suggested the twenties to me. I could be wrong. Comments? [Corrected 8/24/14: I was wrong. Thanks for your expertise, Christina! See Comments.]

P.S. In the theatre, we usually build turbans on a close-fitting felt base. That makes them easy to put on, and the folds can be stabilized with stitching inside the creases  — I mention this just in case you’re inspired to make a turban to go with your 1920s outfits.