Paris Fashions from The Delineator, 1929, Part 2 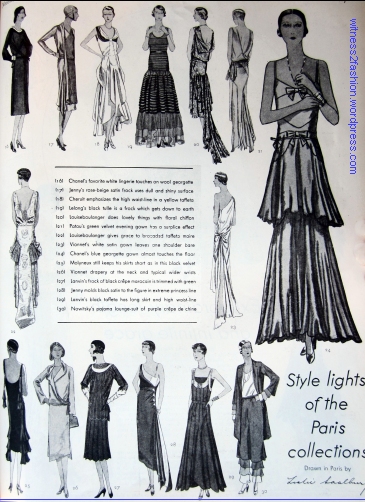 This page combined day, afternoon, and evening styles. The illustrator is Leslie Saalburg. The descriptions are direct quotations from The Delineator. In numerical order: 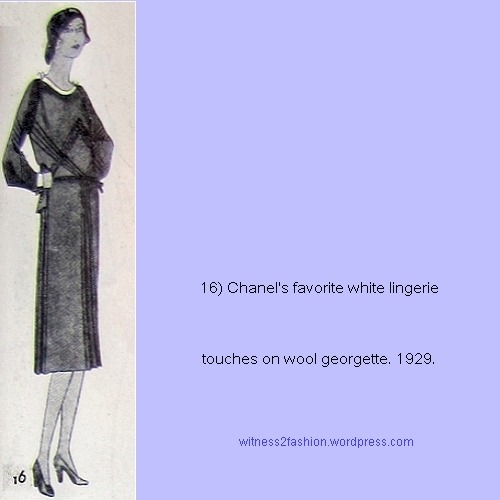 Similar tucks, used on the diagonal, can be seen on earlier dresses by Vionnet. Click here. 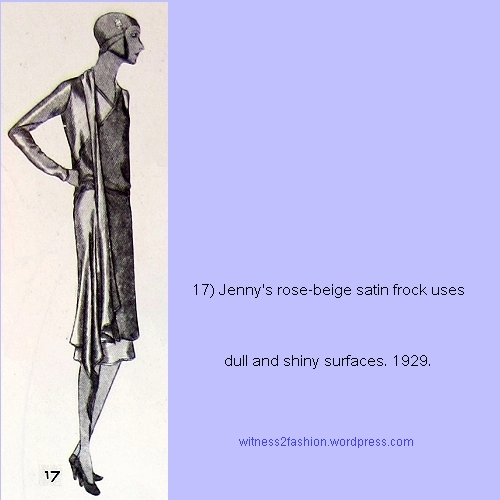 A satin dress by Jenny, sketched for Delineator, Nov. 1929. Crepe-backed satin can be used with either side out, matte or shiny.

Jenny is one of the designers who was very successful in the twenties, but not much discussed now. This 1930 dressing gown by Jenny is in the collection of the Metropolitan Museum. So is this embroidered coat from the 1920’s, with her label. 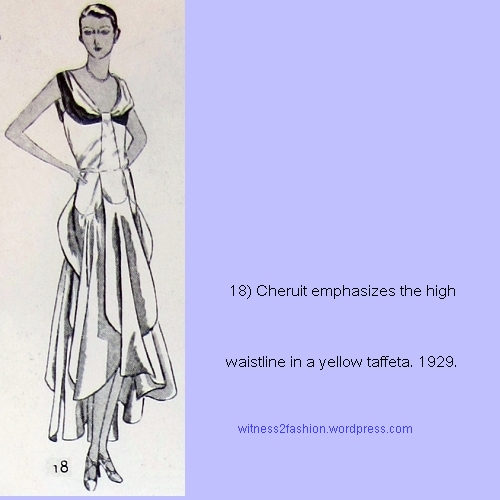 Cheruit’s elaborate gowns were successful in the first decades of the 20th century. (Click here for an exquisitely sequined dress (in an interesting article) at the Museum of London. After she retired, her house continued in the 1920’s; her premises were later occupied by Schiaparelli (1935). 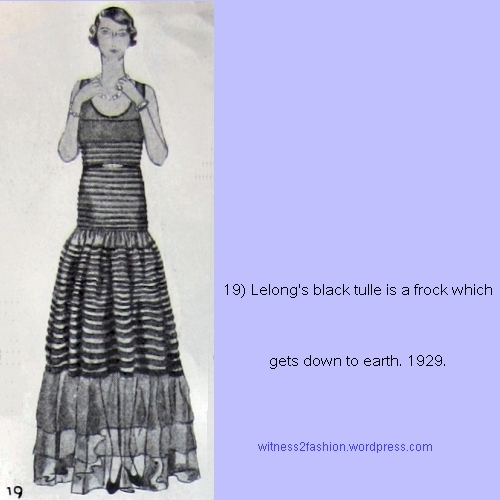 The tulle is in graduated tucks. Click here for a black tulle Lelong gown from the early 1930’s. 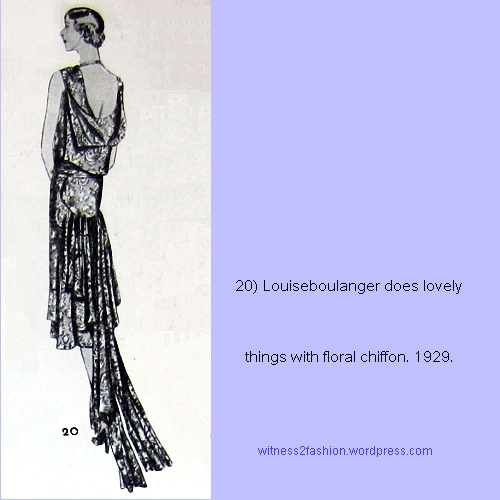 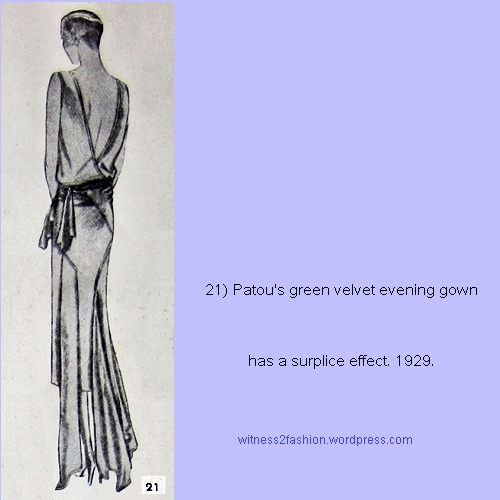 Another Patou from 1929 can be seen here. 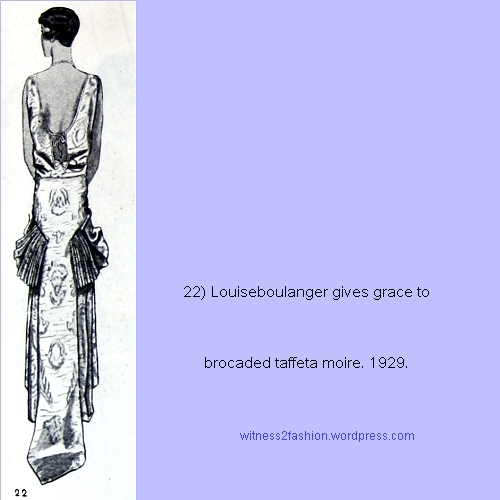 Louise Boulanger worked under several variations of her name. The run-on, all lower case version — louiseboulanger — was the latest. 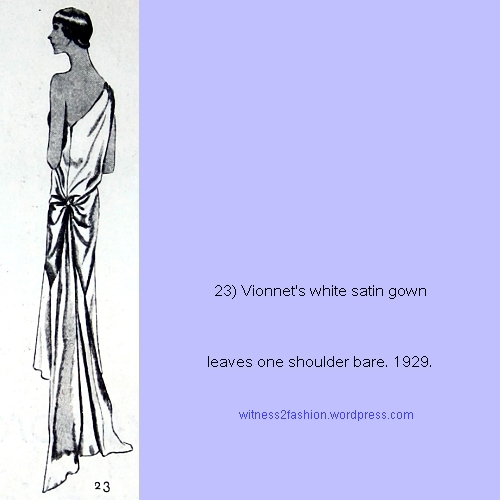 I have written about Vionnet before. Other evening gowns can be seen here and here. 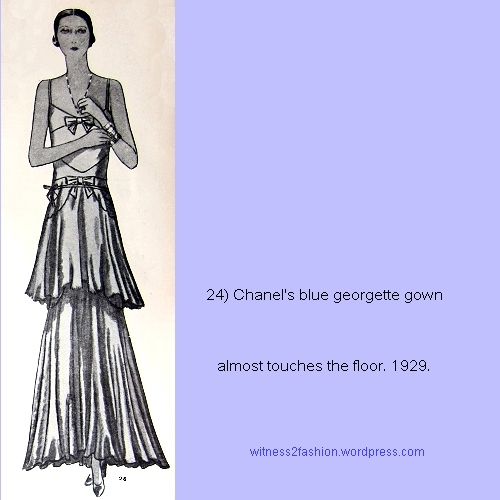 The hem is long all around, unlike most of the other evening hems shown here, which have “dipping” hemlines or long draperies with a short front hem. (Lelong’s black tulle evening gown — #19 –has an even hem that becomes increasingly sheer near the floor.) 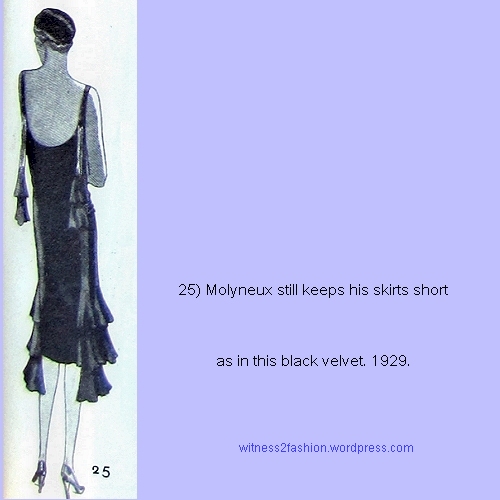 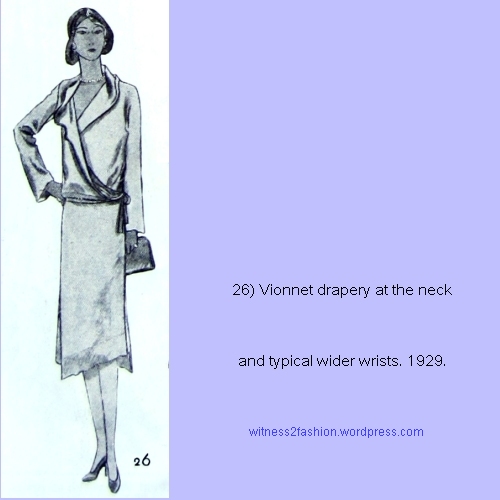 A dress by Vionnet, sketched for Delineator, Nov. 1929. 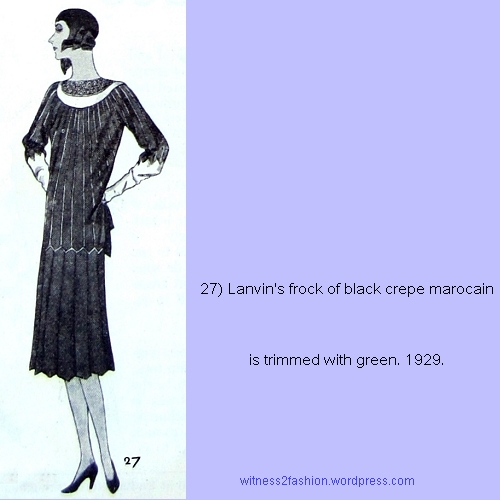 Jeanne Lanvin joined the Syndicat de la Couture in 1909. A coat and dress ensemble from Lanvin, at the Met, dated 1926, is so short that it looks nineteen sixties, on first glance. 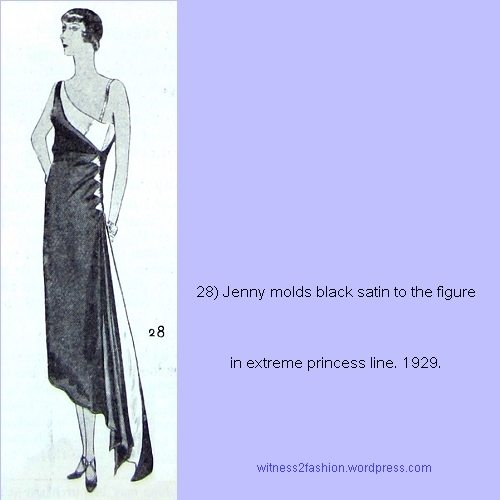 Like the Vionnet dress above, (#23) one shoulder is revealed and one is covered.

The hem appears to be slightly raised in front. 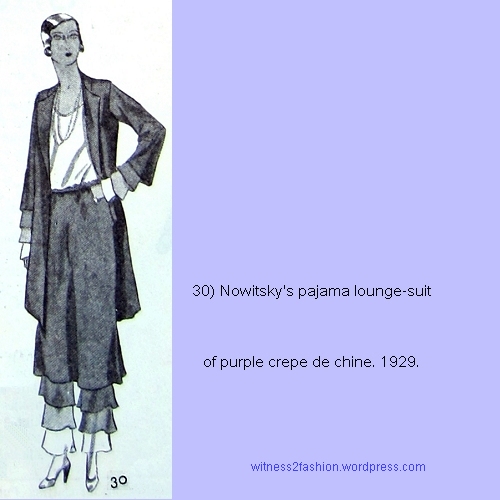 You can see more about beach and lounging pajamas at The Vintage Traveler or here.

In Part 1, I mentioned that Jean Patou took credit for lowering the hemline in 1929. Here are three images from this 1929 Delineator article; Patou’s dress is slightly longer. 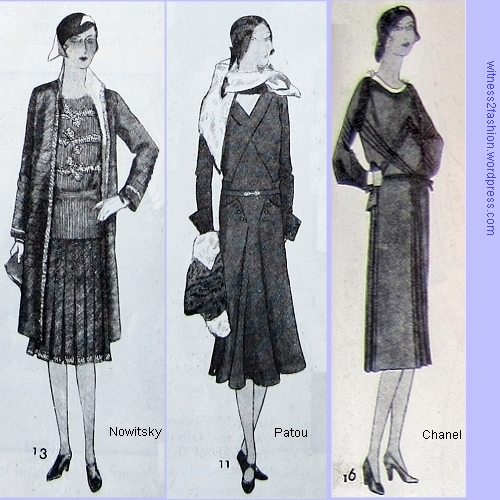 Something much more significant, if you’re tracing changes in fashion, is something that can be seen in these four dresses: 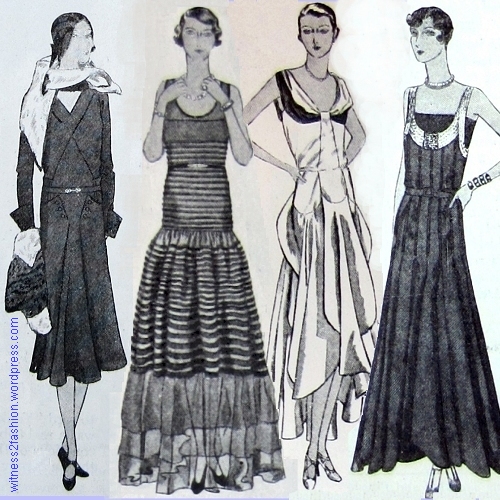 Four designs from Nov. 1929. All have natural waistlines, accented with a belt.

Natural waistlines, emphasized with a tight belt. November, 1929. (Street photographs and movies from the late twenties sometimes show that women were already wearing belts at their waists, especially the belts of coats; perhaps because, without a deforming corset, belts tend to rise to the natural waist on a woman with a well-defined waist and wider hips.)

Belted coat from Sears catalog, Spring, 1929. A belt like this will tend to rise to the natural waist when tightened.