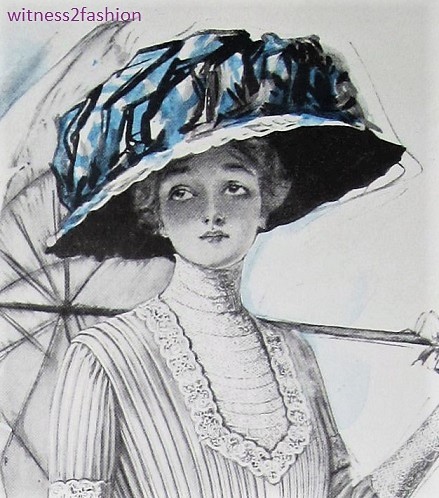 This was the era of huge hats, secured by huge hatpins to huge (often padded) hairstyles.

A gigantic hat with feathers and hatpin. March 1910, Delineator. 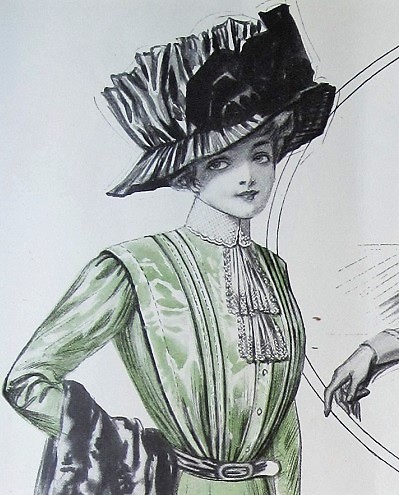 A very large hat from 1910. This one is covered with pleated silk. 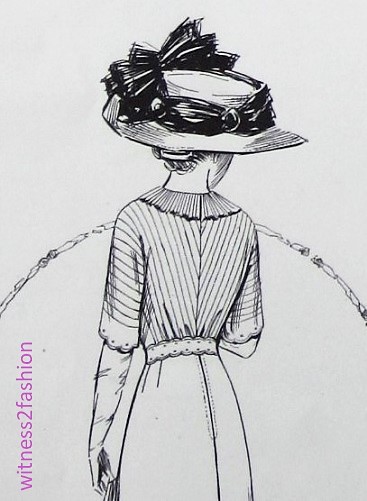 The proportions of this hat dwarf the woman under it. It’s much wider than she is. Delineator, June 1910.

That hat has a wide brim and also a very wide crown — at least twice as wide as the head it sits on. Inside such a hat, the silk lining included a wide band with a casing for a drawstring which could be gathered at the center of the hat and adjusted to the size of the hairdo.The opening could be made larger if you wanted the hat to sit lower on your head, or smaller if you wanted it to rest on top of your hairstyle.

The hat on the left must be supported by an interior that is not the same size as its exterior. January 1910, Delineator.

Another outsized hat from 1910. It’s much bigger around than her head is. Delineator, June.

These gigantic hats were not confined to the upper classes; here is just part of the selection that could be ordered from the Sears catalog in 1910.

Hats from a Sears, Roebuck catalog, 1910. Women could also buy hats untrimmed, and finish them at home.

The next gigantic hats from Delineator were for girls and teens: 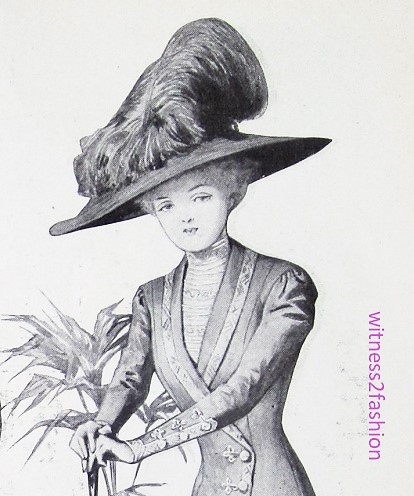 A super-wide hat is worn by a teen in this illustration. She is perched rather shockingly on a table. (That is not a very ladylike way of sitting!)

Young women — schoolgirls, really — sport very wide headgear in this fashion illustration from March 1910. Delineator. [I’ll take a closer look at that hat on the left in a later post.] 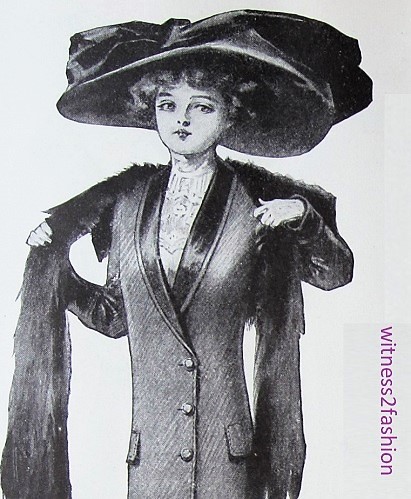 This teen wears a wide velvet-trimmed hat with her fox fur stole and suit. January 1910, Delineator. Imagine sitting next to her!

I was wondering how these hats stayed on in a breeze; here one is secured with a chic veil.

The weight of such large hats was a problem; the black hat above is trimmed with light, sheer tulle and (possibly) artificial black fruits. The one below is also trimmed with sheer netting: 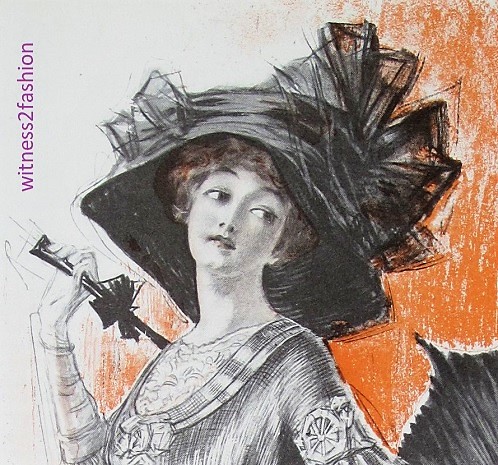 A Parisian lady illustrated in May 1910. Delineator. The size of her black straw hat is exaggerated by swathes and bows of ribbon or net trim.

But the other popular trim used in millions of hats — which added size, height, and volume without adding weight — was feathers.

This straw hat is large but light because most of its bulk is feathers. May 1910. 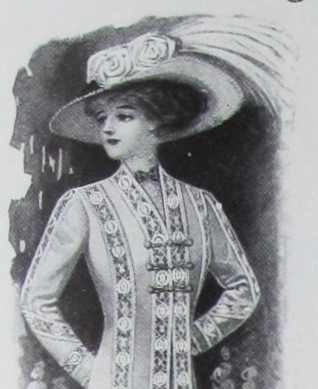 “Osprey“-like feathers shoot like the tail of a comet off this hat from a Phillipsborn catalog ad. May, 1910.

This is where fashion intersects with a social reform movement;  the slaughter of birds for hat decoration became an international problem which pitted women’s fashion against a reform movement led by women. 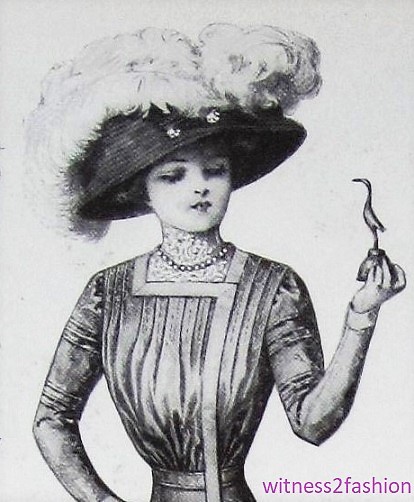 A spray of delicate feathers in an ad for Suesine silk. Are they osprey? March 1910.

In America, the Audubon Society was formed to protect the endangered snowy egret, whose delicate feathers were sold as “osprey.”

I like to think the woman on the left is looking askance at the aigrette (osprey? or heron? or chicken — called “coque — feathers?”) on her neighbor’s hat. Fashion illustration, Delineator, May 1910.

Snowy egret feathers (called osprey) were illegal in the U.S., so Sears offered this black or white herron [sic] feather aigrette instead.

All these images are by way of background information to my upcoming review of “Mrs. Pankhurst’s Purple Feather,” a book by Tessa Boase.

Spoiler alert: I love it.

P.S. (added 10/18/2018) Tessa Boase has kindly sent a link to her post about a museum collection of feathered hats from this era. To see them in full color is quite an experience. Here is a link to just one of the hats she was able to examine. I urge you to read her post and (virtually) visit the rest. Click here.