Orry-Kelly, who designed the costumes for Bette Davis in forty-two movies (see Part 1,) was also credited with these designs for Kay Francis in The Keyhole. Butterick chose two designs from the movie to copy as Butterick Starred Patterns 5102 and 5113. This article introduced the Starred Patterns idea in April of 1933, in Butterick’s Delineator magazine, although the term “Starred Patterns” was not used.

Delineator, page 74, from April 1933. This is the first mention of Butterick’s exact copies of clothes from the movies. Patterns  5102 and 5113 were featured.

Although she’s not remembered as well as Bette Davis, who displaced her at Warner Bros., Kay Francis was a very big star in the early thirties.

“Despite a slight lisp, she was one of Hollywood’s most glamorous and highly paid stars in the 30s, … typically portraying stylish, worldly brunettes in romantic melodramas and occasional comedies…. By the early 40s she had been mostly relegated to B pictures.”  — Ephraim Katz, in The Film Encyclopedia.

Here is the text of the Delineator article which introduced the concept behind Butterick Starred Patterns: 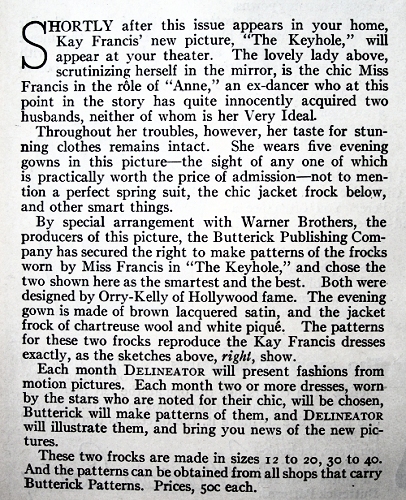 Text of Delineator article, April 1933, p. 74. “The patterns for these two frocks reproduce the Kay Francis dresses exactly, as the sketches … show.”

“Each month Delineator will present fashions from motion pictures. Each month two or more dresses, worn by the stars who are noted for their chic, will be chosen. Butterick will make patterns of them, and Delineator will illustrate them, and bring you news of the new motion pictures.” In previous decades, Butterick bragged about its copies of Paris fashions. In 1933, there were more references to New York styles, and to the influence of the movies.

Butterick 5102 was an exact copy of this brown evening gown worn by Kay Francis in the movie The Keyhole. Delineator, April, 1933.

The caption read “Kay Francis in the role of ‘Anne,’ a dancer, in the mirror scene from her new picture, The Keyhole.”  (Click the link to watch it.) The article said, “Throughout her troubles [bigamy and blackmail] — her taste for stunning clothes remains intact.”

[Note: No. 5102 is a dress for those with perfect posture, or with toupee tape on their shoulders. If your napkin slips off your lap at dinner, don’t reach down to retrieve it in a backless, sideless bodice like this….] “The evening gown is made of brown lacquered satin, and the jacket frock of chartreuse wool and white pique.”  Here is a closer view of the bodice details:

The photos from the film show how precisely Butterick’s patterns copied these dresses.

You can see larger images of Butterick 5113 and 5102 at the Vintage Pattern Wikia, where their images from the Fall 1933 Butterick pattern catalog can be found. You can see the pattern envelope for 5102, with a very different bodice, by clicking here. It says nothing about “Starred” patterns, so perhaps that title wasn’t conferred until later. These are actually the first two patterns in the series of twelve, and do appear as a group in the 1933 pattern catalog.

After watching a lot of clips on YouTube, I discovered that Kay Francis is much more attractive in motion than she appears in studio portraits. Those downward-slanting eyebrows make her look morose in still photos, but in movies her face seems lively, and her fleeting expressions strike me as more natural and genuine than run-of-the-mill thirties’ acting. She was equally at home in comedy and melodrama.

Leonard Maltin’s Classic Film Guide describes The Keyhole as a “seedy romantic drama with Francis anguishing in a variety of elegant Orry-Kelly gowns.” Well, isn’t suffering supposed to make you beautiful? In the movies, it could.

You can read more about glamorous Kay Francis at the TCM site. Costume designer Orry-Kelly is the subject of a new documentary film, Women He’s Undressed (2015). See the trailer here. (It’s Australian, like Orry-Kelly, so may not yet be available in the U.S.  I love that trailer! No wonder he won three Oscars *TM*!)