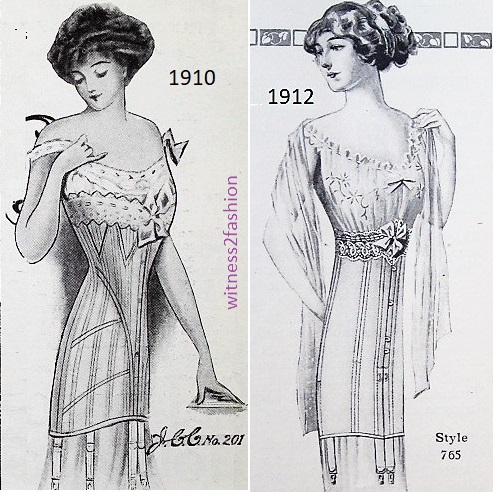 The ideal woman seemed to be elongated in 1912, and the waist of her dress was rising, while her corset extended far down her thighs.

This corset starts below the bust and is so long that there is a cut-out in the center front to permit walking.

From an article on corsets by Eleanor Chalmers, Delineator magazine, April 1912.

Two Justrite brand corsets, one from 1907 and one from 1912, show a drastic change in the ideal figure.

This change in the fashionable figure (and corset) is extreme, and happened in just five years. (Imagine being 17 years old in 1907, and 22 years old in 1912. Your body wouldn’t have changed, but whether you had a “perfect figure” certainly would have.)

The C/B a la Spirite corset ad from Delineator, August 1912. An unrealistic fashion figure and no real bust support.

Once again, the perfect figure is an impossible ideal.

“The Corset of Style, Health, and Comfort…. The doctor and the dressmaker both endorse it. 2,000,000 Satisfied Women Wear It.” [And none of them looked like this!]

Looking at some of the fashions of 1912, one wonders why the hips needed to be so narrow: 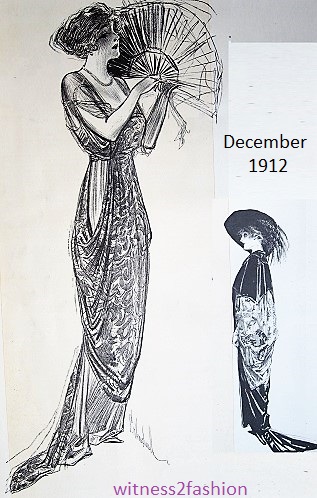 Skirts often had hip-concealing draperies, a trend that continued in 1914.

These 1912 blouse/waist and skirt outfits do show a long-looking, high-waisted figure, but the hips are not especially slim: 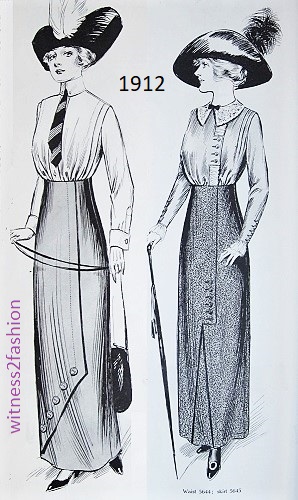 The waistline of dresses and suits was rising:

The suit on the left suggests a rising waistline with a seam just under the bust; a relatively natural waistline is shown at center; the fashionably high waistline can be seen in the purple ensemble at the right.

An April 1912 article on the new corsets (Delineator, page 341) showed one on a real human being:

Notice the difference between the real (above) and the ideal (below:)

As corset tops got lower, the need for bust support led to the wide-spread use of the brassiere.

A “Brassier” advertisement in the Siegel-Cooper catalog ad, Delineator, September 1912.

“Brassiers for full figures, corset cover and bust supporter combined.” But I’ll save brassieres and “bust confiners” for another post.

The corsets of 1912 still straightened the front of the body while tilting the pelvis toward the back, which made clothes short-waisted at the back. Anyone familiar with so-called “Armistice blouses” knows they are shorter in back than in front, and will pop out of the skirt if you aren’t wearing a correct period corset. 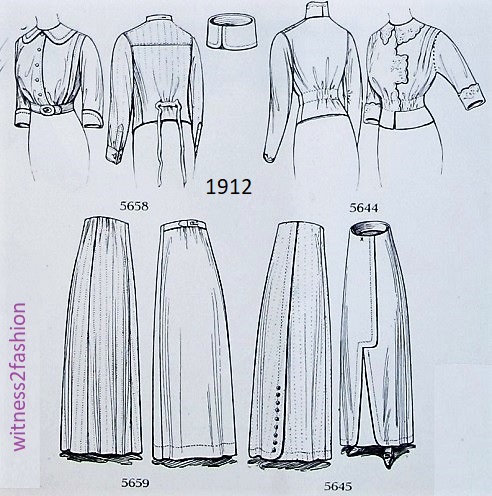 The 1912 corset still tilted the pelvis up in back, as these pattern illustrations show.

The characteristic body tilt of 1912 (and several years after…) made the back waist higher than the front waist.

NOTE: I am not writing an authoritative history of corsets, just offering images from one or two sources in the hope that serious researchers will find them helpful. I have chosen extremes for the sake of contrast, but women could choose from a wide range of styles, and many continued to wear their old corsets until they wore out.