Christmas Activity: Go Through Your Old Photos with Your Old Relatives

Every year I intend to remind people that the lulls during the holidays — after a big meal, while dinner is cooking, any time there are several generations gathered together at someone’s home — are the perfect times to bring out that big box of photographs you haven’t looked at in ages, and to go through them with the elders in your family. If you can get a pre-teen or teenager to join the conversation, all the better. It’s their history you’ll be talking about. It’s not just about writing names on the backs of photographs, it’s about the stories you might not otherwise hear. 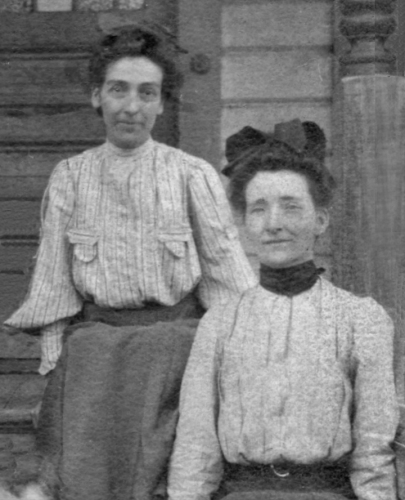 I was lucky enough to know my Great Aunt Alice when she was in her seventies. I never met her sisters Cora and Laura. All I know of them are these photographs, which are interesting as a record of what some working women wore from the late 1800s to about 1950. But they are also interesting because I can see family features in their faces. And I keep trying to read their characters from these tiny glimpses of the past.

Cora was the eldest. She looks solemn in most photos.

Her father’s obituary says she was the town librarian until she married and moved to a different part of the state.

Laura, the middle child, was considered “the pretty one,” I suspect; she usually has a hint of a smile and sometimes, a dimple. 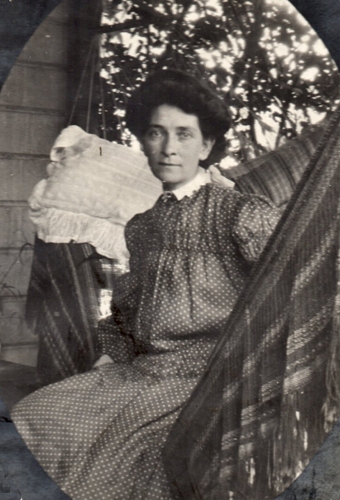 Alice, the youngest sister, was a single working woman, a legal secretary with a shrewd mind and a great sense of humor, who usually clowned for the cameras.

You can see why I’d like to have known them all!

Here they are in the early 1920s.  Alice is seated, holding the baby. Laura (left) now wears glasses, and Cora looks serious. They would be at least in in their forties, but all have adopted 1920s hair styles. In the following photos, you can see that Alice’s curly gray hair is bobbed. 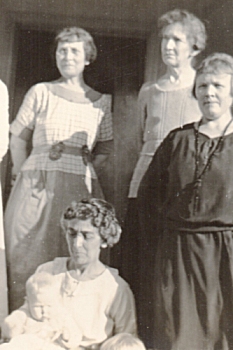 Laura (in glasses), Cora (standing in top row), and Alice seated, holding her infant nephew. About 1922.

Later in the 1920s, Alice and Laura went on vacation with my mother and my grandmother (their sister-in-law).  They have all adopted short 1920s skirts and fashions. My grandmother, center, is showing off the legs that would have been hidden when she married, in 1893. This generation of women had to adapt to the most drastic changes in western fashion ever to take place over a thirty year period. 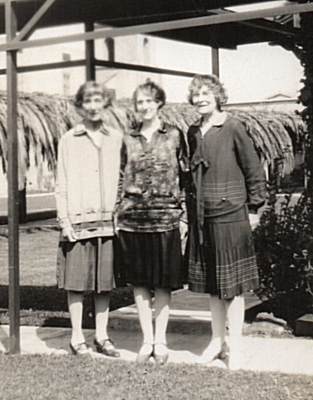 On this trip, they stopped at a roadside stand for watermelon, mugged for the camera, and two of my favorite photos were made:

Laura in cloche hat, seated on the front bumper of their car, and looking flirtacious. About 1929. 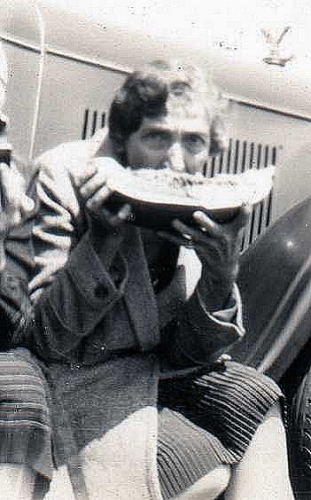 Alice mugging for the camera. She looks like no one is going take that watermelon away from her!

They kept up with the styles in the thirties and forties, too.  Their hair is gray, but their dresses are sleeveless — quite a change from the high-collared, long-sleeved styles they wore as young women at the turn of the 19th century.

Laura, their brother John, and Alice. Probably mid-to-late 1930s, since the skirts are not very long.

Thanks to my mother’s sister, who went through all these photos with me one Christmas afternoon, I can name my Great Aunts, and see a little bit of their personalities. But we didn’t get around to this picture, so I will never know if it’s Aunt Laura (who looked so full of life in the 1920s,) or Aunt Cora, who, unlike her sisters, married and raised a family.

I’ll never know if this is Laura or Cora, because there is nothing written on the back of the photo.

I loved to visit Alice when I was a little girl. This is Alice about 1947, in a rare contemplative mood. 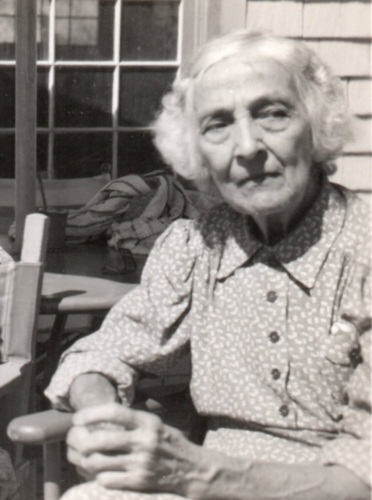 Remember, this is a woman born in the 1870s, a classic “skinny old maid” to quote the movie The African Queen. But she was the first woman — probably the first person — I knew who had a tattoo! (She regretted it, and usually covered it by wearing several rings over her tattooed finger.) Once, while we were visiting, she explained that she always made a tour of her house around twilight, checking the locks and looking under the bed for hidden intruders. “Aunt Alice,” my mother asked, “what would you do if you found a man under the bed?”

Remember to share those memories and label those photographs while there are still people who can tell you stories about them! Happy Holidays to all.