Clothing Budget for a Married Couple, 1925

“Can You Afford to Marry?” asks this article from Delineator magazine, September 1925, p. 21.

In September of 1925, as part of an ongoing series on budgets, Delineator’s Home Economist asked, “Can You Afford to Marry?” in an article titled “When George and Mary Wish to Marry,” by Martha Van Rensselaer and Flora Rose. This article suggested a budget for two people, living without any luxuries, but “in comfort and decency:”

Minimum Budget for a married couple, Delineator, Sept. 1925. This assumes a minimum weekly salary of about $35.00.

Caution: “There is nothing as dangerous as a man who has only read one book.” — Molly Ivins in a radio interview.

Obviously, no serious scholar would base economic deductions on just one source — in this case, a series of articles in a woman’s magazine — The Delineator — published by Butterick. The Butterick Publishing Company emphasized fashions adapted from Paris couture, aimed at an aspiring middle-class reader. (The public areas of its Manhattan office building were decorated in 1903 by Louis Comfort Tiffany)  Consider those facts while reading this article. I’ll share what I have. (Since Delineator was a large format magazine, I broke the long article up into smaller paragraphs in a separate post, for legibility. Click here to read the original article in full.)

Although I was most interested in the clothing budget for a man and woman in 1925, we need to look at the suggested food budget to get an idea of the general standard of living for “comfort and decency,” as envisioned in this article. The authors offered several possibilities. (Later, they did the same for the clothing budget.) 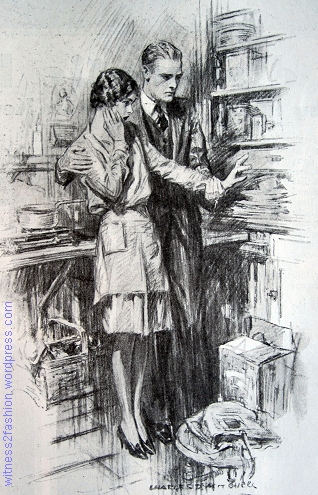 “What must Mary and George spend for food? To provide a dietary that will give the greatest measure of health and protection from food, not less than eighty cents a day is necessary for raw food materials for two grown persons.”

A) 80 cents per day?  “This small amount spent for right foods means a wholesome diet, but a monotonous, uninteresting and unvaried one. It restricts eating to eating to live.”

C) $1.50 per day? “A dollar and a half per day for raw food materials for two adults will permit some food luxuries….”

D) $2.00 per day? “Two dollars a day, skillfully spent, will provide materials for food luxuries, as well as necessities.”

Conclusion? $30 per month on food for two people.  “To furnish anything like an appealing, and at the same time adequate diet, …these young people should count on not less than fifty cents a day apiece or a dollar a day or thirty dollars a month to buy the raw food materials.”

This lets us know that their total budget of $150 per month, or $1800 per year, is not based on a high standard of living. It is, in the opinion of Martha Van Rensselaer and Flora Rose, barely above subsistence level. It also implies that all meals will be prepared at home from raw materials.

From an ad for a Butterick cookbook, June 1925. Delineator magazine

“What shall Mary and George spend for clothes? Nowhere can we find any satisfactory basis for agreement on a clothing standard. All we can do is to summarize the budgets we have had given to us by various friends who are maintaining a fair to good appearance on modest incomes.” 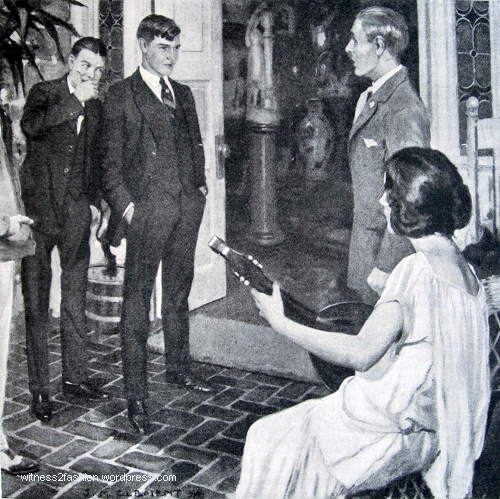 A) $150 per year for Mary’s clothing and $125 for George? With $275 per year, “Mary, if skillful, may maintain the wardrobe decently but meagerly for a hundred and fifty dollars for herself and a hundred twenty-five dollars for George.”

B) $200 per year for Mary and $150 for George? ($350 per year) “With two hundred dollars for herself and one hundred fifty for George, plus her skill in making, making over, and repair, the two may be simply but attractively clothed.”

C) $300 for Mary and $225 for George? ($525 for a married couple) “With three hundred dollars for Mary and two hundred twenty-five dollars for George, they may begin to rise into the well-dressed class; but this amount still means a very modest wardrobe for each.

Conclusion? $360 per year for clothing one man and one woman.  “To maintain a standard of clothes which will give them not only comfort but reasonable satisfaction in looking well, it is hardly safe to plan on less than two hundred dollars for Mary and one hundred fifty dollars for George. If Mary can not sew, they must count on spending very much more than this. Exceptions to this allowance may be made in warm climates, where the cost of clothing may be reduced.” 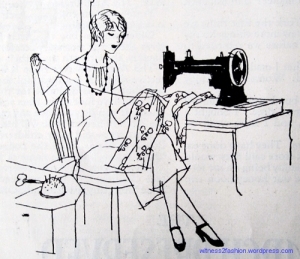 Note that the husband’s wardrobe is always less expensive than the wife’s. A white collar businessman could wear the same suit to the office, day after day. He would need a winter coat and a raincoat, a tuxedo, a summer suit and a winter suit, perhaps a blazer and white flannel trousers, at least two hats, and shirts, ties, shoes, etc. His wife’s wardrobe would be driven by four, rather than two, seasons — and would go out of style faster. If he was a rising young businessman, she would need to attend social occasions with him, and look “attractively clothed.”

Of course, Butterick’s Delineator magazine had a vested interest in encouraging home sewing:

In 1925, you could get a treadle sewing machine from Sears for $33, or a portable electric for $43. Singer invented the installment plan, because a sewing machine cost at least a week’s salary (two weeks’ salary for a woman.)

Hoover vacuum ad, Delineator, Nov. 1925. “$6.25 down! — that was all I paid to have my Hoover delivered….By the end of the month I had more than enough to meet the small payment.” 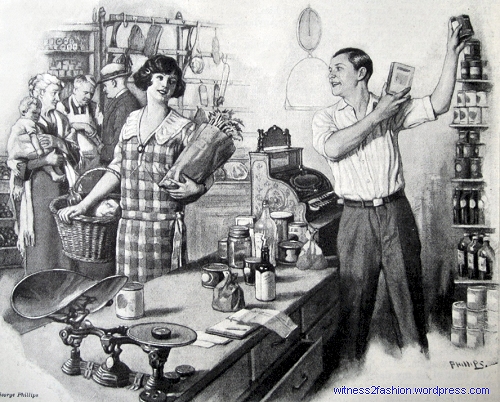 Apparently the Delineator’s economists assume that “Mary” will have a full time job just looking after herself and George — grocery shopping, cooking, cleaning and sewing; some women worked outside the home, however, until they started a family; the wife’s salary would help a couple build up a “nest egg.” The home economists definitely assume that the couple must plan for children, and consequently their expenses for “shelter,” “furnishings,” and “operating” will be the biggest portion (43%) of their income. 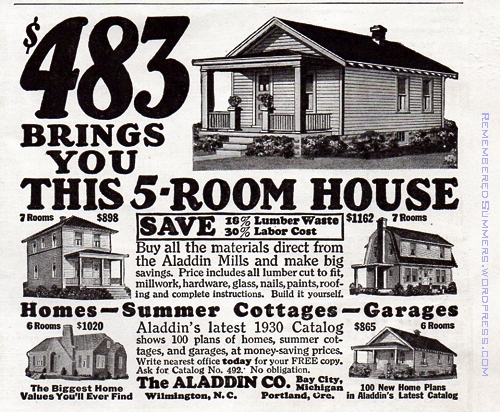 Housing Budget for a Married Couple, 1925

From $1800 a year, $780 is budgeted for Shelter, Furnishings, and Operating Expenses.

Twenty percent of their income will be spent on Food, and another 20% on Clothing. “Shelter, Furnishings, and Operating expenses” are all part of home ownership. This article assumed that the couple will have at least two children eventually, so they would need either a larger apartment than a single person would, or a house of their own. The cost of transportation to and from work (a used car, if necessary) was included under Shelter; Operating expenses included utilities, home and yard upkeep, property taxes, home insurance, cooking and heating fuel, as well as cleaning supplies and appliances, laundry, and “services.”

In 1925, utility expenses included ice delivery, for the “ice box” refrigerator, and a telephone.

A telephone in two rooms. Ad, Better Homes and Gardens, July 1930. “There are few places where a telephone is needed more than in the kitchen …. Calls can be placed or answered without getting too far from an active and temperamental oven.”

A married couple would either send their laundry out or, perhaps, buy a new “washing machine.” 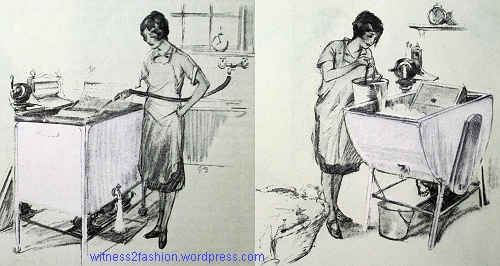 Washing machines, Delineator, August 1926. The woman on the left is filling hers with a hose, and it drains into a hole in the floor. The machine on the right is even more primitive. No wonder many “sent out” their household laundry.

Clothes for a Married Woman versus a Single Working Woman.

To read the post comparing a woman’s dress budget from 1924 with one from 1936, click here. Both articles agree that a woman should plan to spend between $150 and $200 dollars per year on clothes in 1925. If a single woman’s laundry and cleaning expenses are added to her clothing purchases, her clothing expenditure totals about $200 for the year.

“Mary, if skillful, may maintain the wardrobe decently but meagerly for a hundred and fifty dollars for herself … “With two hundred dollars for herself and one hundred fifty for George, plus her skill in making, making over, and repair, the two may be simply but attractively clothed.”

Butterick patterns, Delineator, Oct. 1925. By 1927, Mary would need to be shortening or remaking these dresses.

At the end of “When George and Mary Wish to Marry,” the writers acknowledged that many families live on a much smaller amount of money than the $1800 in their “comfort and decency” minimum budget:

“…Hundreds of thousands of families in this country are living on smaller incomes than this…. They have faced and adjusted themselves to the sacrifices which must be made where money is too scarce to provide the amount of comfort we have described as reasonable.”

For anyone wishing to read the entire budget article from 1925, which breaks down other expenses, including the cost of having children, it can be found here.