The Vintage Traveler, writing   “Why Were They Called Flappers?” , supplied more evidence that young women were called “flappers” well before the 1920’s.

I once mentioned the oft-repeated theory that 1920’s “flappers” got that name from the unbuckled galoshes they wore, when I was writing about rubber rain boots called “Zippers.” (click here.) Yesterday I found this illustration in a lovely book that was new to me: 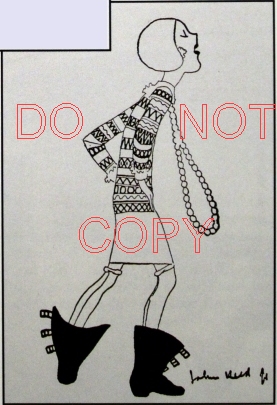 At the library, I discovered two well-illustrated books by Susan Langley, published by Schiffer publishing: The first, Roaring ’20s Fashions: Jazz, covers 1920 to 1924; the second, Roaring ’20s Fashions: Deco, covers 1925 to 1929. In addition to period illustrations, many vintage fashions  — presumably in private collections, since Schiffer books are aimed at collectors — are beautifully photographed in color, and with close-ups, by John Dowling. Published a few years ago, the prices given may have changed, but these books are packed with illustrations that I have never seen before, like that John Held flapper-in-galoshes, above. Langley has done a wonderful job of connecting vintage fashion plates with real garments. The plates are not the ones I have seen in other fashion histories, and she also includes images from less familiar mass market store catalogs, not just Sears. The real garments tend to be glamorous, since evening dress is more likely to survive, but there are some day dresses and suits, in addition to some designer labels. And she shows men’s fashions and vintage examples, too! Both volumes are definitely worth a look if you love the Twenties.

But — in spite of that drawing by John Held — there are plenty of  pre-nineteen twenties uses of the word “flapper.”

I just heard this vaudeville/music hall song from 1914:  “Florrie Was A Flapper,” sung by Elsie Janis. Elsie Janis dressed in men’s clothing (like Vesta Tilley) when she sang this vaudeville song in London in 1914.

Here are a few of the lyrics — plainly proving that Florrie the Flapper (1914) was a precursor of, not only the flappers of the twenties, but the Gold Diggers of the 1930’s!

Florrie was a flapper who would gad about the town
She’d lunch with you, she’d dine with you, she’d sup
She often said she didn’t feel the need to settle down
She had so many friends to settle up
She’d let you take her shopping at the most expensive place
She’d say, ‘You mustn’t buy me things,’ but still
As soon as ever you began to bill and coo
She simply cooed and left you with the bill.

Colleen Moore was one of the leading “flappers” on screen in the 1920’s. In Why Be Good, she manages to hang on to her chastity while routinely getting men to buy her dinners and drinks and dresses…. Just like Florrie (whose virtue is less certain.)

P.S. If you love the Thirties:

Click here for the full lyrics of “Florrie Was a Flapper,” written in 1914.