Jeanne Adele Bernard (married name, Jeanne Sacerdote) worked as “Jenny” — an oddly British sounding name. (There were other designers in Paris named Bernard.)  The name “Jenny” became as well known as “Georgette” or “Lucile.” She had been hugely successful in the late 1910s, and she adapted to the 1920s just as well.

Afternoon gown by Jenny, photographed by O’Doye for Delineator February 1924.

Do check out this luxurious evening coat by Jenny, sold by Carolynforbestextiles.com. Amazing 1920’s colors. Simple — but dazzling — is this mid-twenties dress from Jenny: 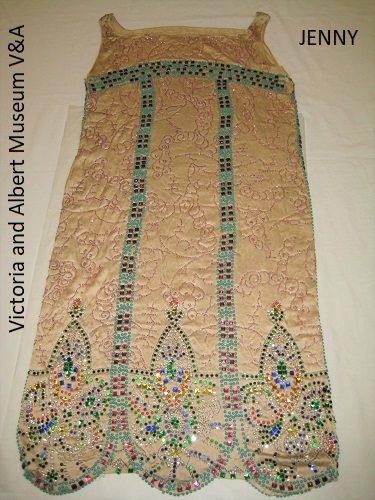 Evening dress by Jenny, 1925 to 1928; courtesy of the Victoria and Albert museum.

The Peabody Essex Museum has a superb Jenny evening dress circa 1926, more elaborate that the one above and photographed on a mannequin. Click here. 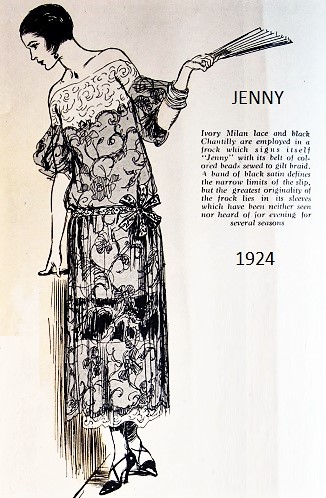 Jenny combined both ivory and black lace with black satin and a beaded belt on this very feminine gown, sketched for Delineator, April 1924.

What struck Delineator’s editors was the full sleeves,  “which have been neither seen nor heard of for evening for several seasons.”

Ivory lace tops the off-the-shoulder bodice [how did that work?] and peeks out from below the black lace skirt. Bare arms were standard on evening dress in 1924.

This sleeveless Jenny design from 1926 has the low armholes and bare arms expected in formal evening gowns.

In 1924, Jenny was not afraid of the play of patterned fabrics and severely geometric details: 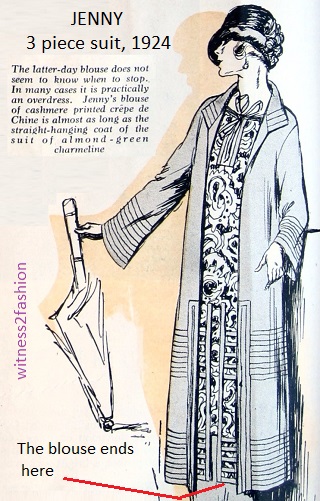 A three piece suit from Jenny; the cashmere printed crepe de Chine “blouse” is a tunic almost reaching the hem of the coat, which is shorter than the long gray skirt. In Delineator, April 1924. 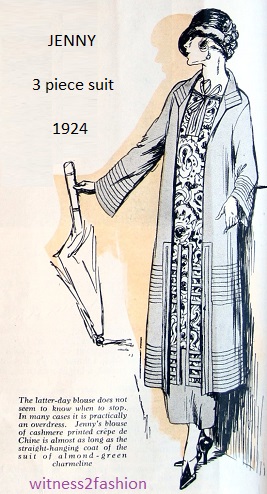 When the very narrow “tubular” silhouette came in, Jenny was ready:

In 1925, one of Jenny’s designs was this coat and dress ensemble. Her hems were rising rapidly, but she went against the tide with this very high collar, and a dress trimmed with tiny gold buttons. 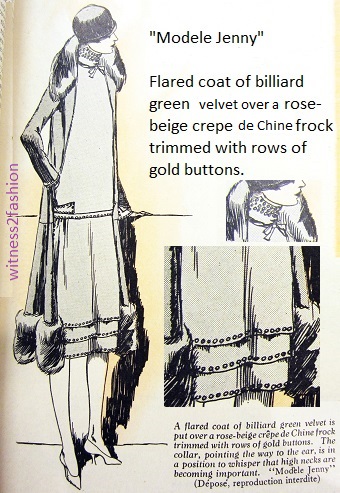 Three couture ensembles from Delineator, June 1926. Jenny shows a short flared coat over a “just to the knees” dress.

Earlier in the 1920s skirts tended to be straight in back; now these are flared all the way around. 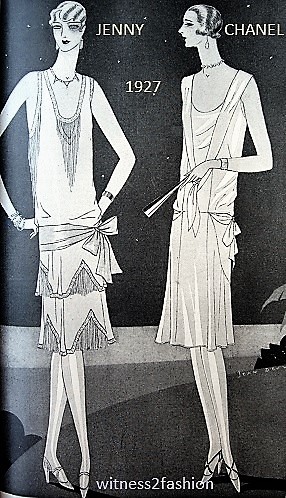 Evening dresses by Jenny and Chanel, Sketched for Delineator, February 1927.

There are a lot of 1960s’ and 70s’ “Twenties” costume dresses out there, covered with tiers of fringe, but this is what beaded fringe looked like in the hands of a couturier like Jenny; on a pink dress, a deeper pink “fringe of crystal beads that touch it with rosy frost.” 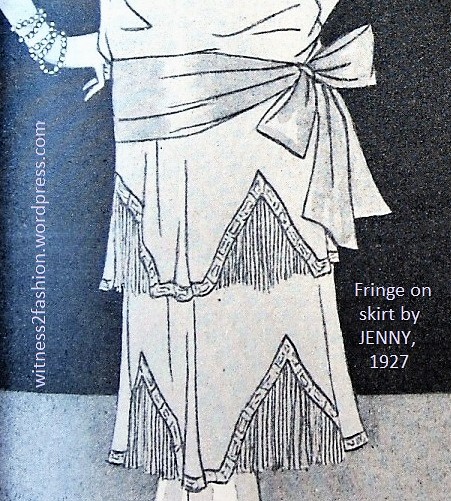 I’m not as impressed by every one of her 1927 creations, although closer study usually reveals a little extra creativity. (Remember these are just a tiny fraction of her output.)

Her more tailored coats and suits really are wonderful, with many subtle touches.

One-button suit by Jenny, illustrated in Delineator, June 1927.  The button suggests “a high waistline,” the style of the 1930s, which was just starting to appear.

Lovely lines and pocket detail on the left; astrakhan (unborn lamb) is used on the collar and — unexpectedly — on the back skirt of the coat at right. [Photo distorted by the curvature of the page.] 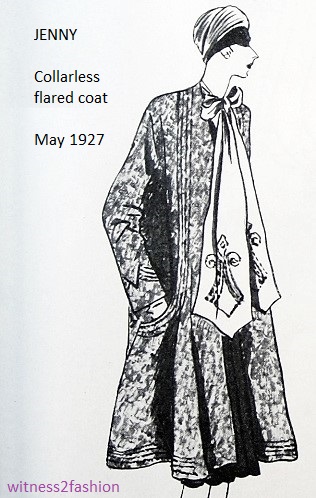 If you can ignore the scarf, this is a coat decades ahead of its time, from the “Swing” of its flare to the curved seams running into the pocket; note the curved detailing on the cuff. Illustrated for Delineator, May 1927.

It’s quite a change from the tubular coats she made in 1924! Just three years had passed. 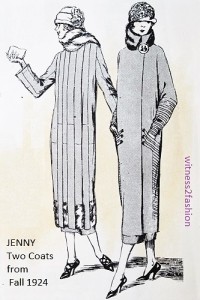 In 1928, Delineator was still enchanted with Jenny’s flower-printed underwear, which she had been showing since 1917, or possibly earlier.

In 1929, Jenny was showing asymmetrical fashions. These are dramatic and unusual. 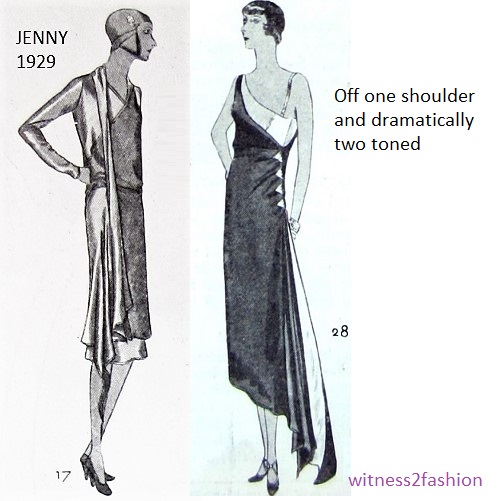 The short satin gown is very unusual. I wish we could see all around it. 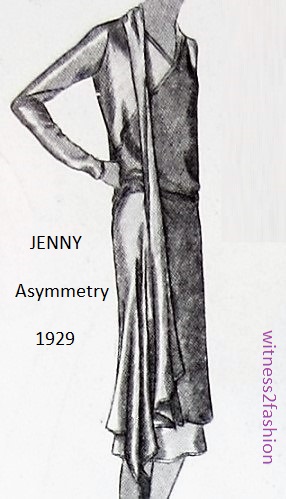 Where does the dark begin? Where does it end? What happens in the back? I don’t know.

By this time, Jenny was in her sixties. She continued making up-to-date gowns in the 1930s. Thanks to Elizabeth Handley Seymour’s desire to make and sell copies to her London clients, the V&A museum has a color sketch of a slinky, broad-shouldered Jenny gown, 1936.

Jenny was one of the couture houses that did not re-open after closing during World War II. For a time line of Jenny’s life, click here.

[Added on 4/21/19] And one for the road: A Jenny evening dress with a complex  skirt and a high, cross-over front. It was Reseda green crepe Romain; the long ties in back gave a flattering rear view, or could be worn with one tie brought to the front.

The poor image quality is what happened when many magazines were converted to microfilm to save library space.