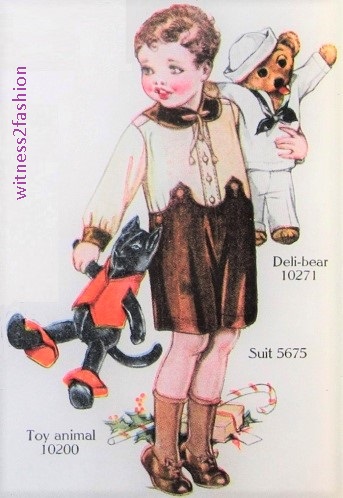 A Butterick pattern for little boys, plus two Butterick doll patterns. Delineator, December 1924. His shorts are attached to his shirt with buttons.

I haven’t figured out why this is a “Deli-bear.”

Deli-bear pattern 10271 looks like a sailor bear to me.

The same doll pattern was featured again in 1926:

To my eyes, this Puss in Boots doll from December 1924 isn’t nearly as appealing as the Deli-bear. (I had a real black cat, who was very handsome, unlike this doll.) 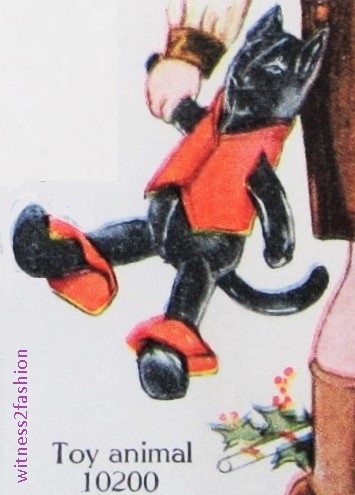 I’m deducing that this is Puss in Boots. Butterick Toy animal pattern 10200, from December 1924.

This toy animal dolls pattern was shown in two places in the same issue.

On another page, the toys seem to be photographed, rather than drawn, so we can see the nice effect of using a textured fabric on the rabbit:

Patterns for “baby dolls” (some almost as big as real children) were also on offer. 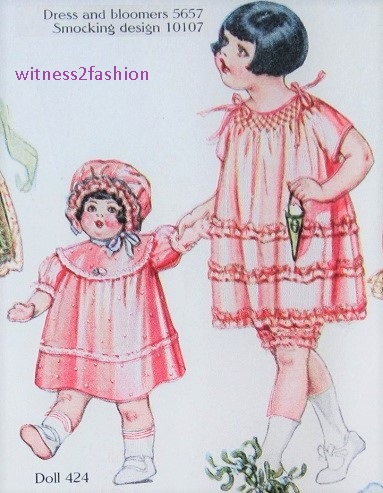 Whole wardrobes for purchased dolls were available to make for Christmas. Left, Butterick 424.

[More than twenty years later, clothes for dolls and little girls didn’t look much different from these 1924 illustrations as far as dress styles and doll sizes went:]

Toddler and very big baby doll, circa 1947. The shapeless dress (with room to grow) was still around. 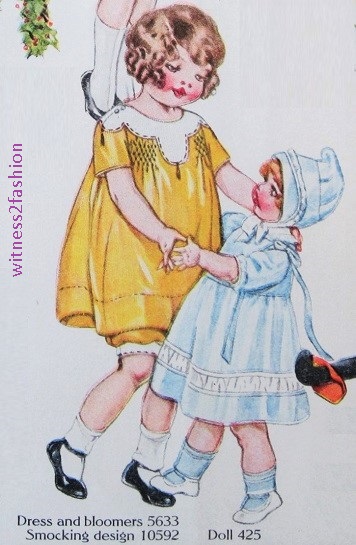 A little girl with a doll dressed in Butterick 425.

The doll’s clothes are as detailed as a real girl’s. Butterick 425. 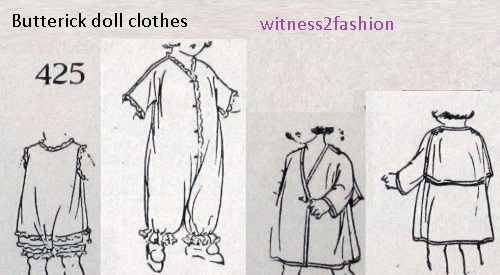 As a child, I appreciated doll clothes that were like mine — including underwear and pajamas or sleeping suits. (If I had to wear itchy, frilly undies, so did my dolls.)

Little girls sometimes wore “Romper” suits, and so does this doll from 1926: 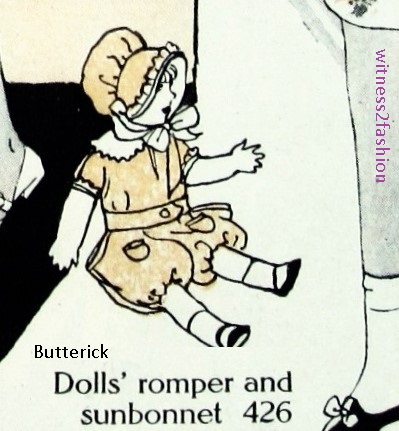 Butterick doll 10192 has yarn braids and does not look like a baby (more like an older sister.) I love those tiny appliqued birds! Fast, easy blanket stitch trims the girl’s collar and cuffs.

DIGRESSION: Since the holidays are approaching, I’ll slip in my yearly reminder to get out those old photos now, and get some names and stories penciled on the back when relatives gather. Suggested questions: What was the best toy you ever got? What were your favorite books (or games) when you were a child?

Witness2fashion with home-made Raggedy Ann and her store-bought “brother,” Raggedy Andy. Raggedy Ann (made by a friend of my Grandmother) had real, black shoe-button eyes, and I almost dug a hole in her chest by trying to feel her candy heart with “I Love You” printed on it. 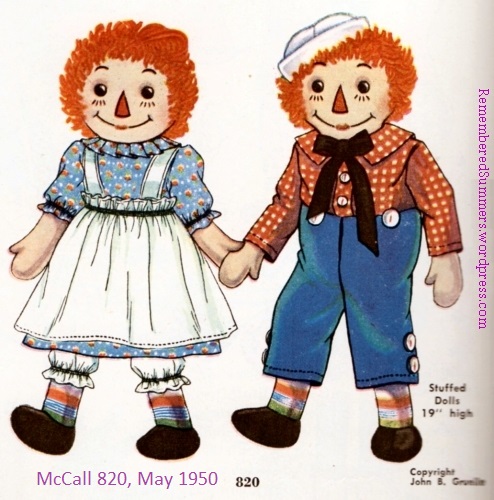 McCall pattern from the 1950 needlework catalog. My Raggedy Ann looked exactly like this one, with a dotted Swiss apron and bloomers. Raggedy Ann and Andy stuffed doll pattern, McCall 820.

As the only child of parents in their forties, I didn’t have much contact with other children until I started school. Aunts and uncles deluged me with baby dolls, but I never wanted to be a mother. Dressing and undressing dolls was not my idea of fun. My favorite dolls were Raggedy Ann and Andy (I begged for Andy, and finally got a store-bought Raggedy Andy to go with my beloved, home-made Raggedy Ann.)

A book that survived my growing up, many moves, and growing old.

There was a series of books about Raggedy Ann and Andy. They had adventures. ***  Those dolls were not my “babies,” they were my friends.

Too much of a good thing,

I actually didn’t know enough names to name all the baby dolls I was given, so I took to naming them after the person who gave them to me. I am probably the only child ever to have a baby doll (in a lacy bonnet and a long white christening dress) who was named “Uncle Ole.” (I just recognized “Uncle Ole” as the doll in a frilled bonnet at top left! At least “Uncle Ole” wasn’t too big to carry!)

*** All too often, their adventures involved cookies and candy….