Who Should Wear a Necktie in a Yearbook Photograph? 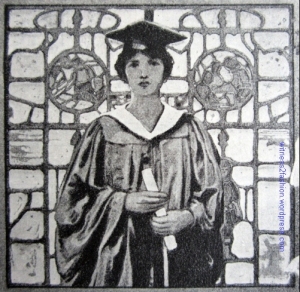 The power of clothes to disturb people seems to have diminished since the shock of hippie clothing in the 60s and punk clothing in the 70s and 80s outraged so many people — but even today, when it almost appears that “anything goes” in fashion, a news item appears to remind me that it’s not true:  A young woman in San Francisco wore a tuxedo & black tie for her yearbook picture, which was against the school rules. 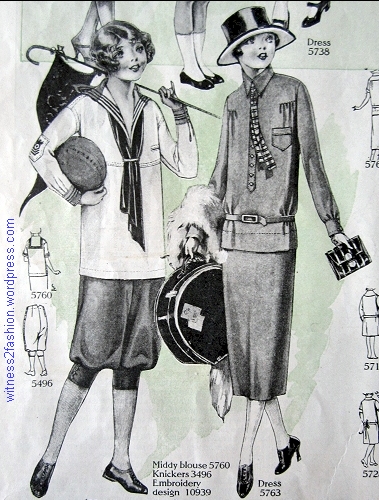 Clothes for Misses Age 15 to 20; Butterick patterns, Delineator magazine 1925. In the 1920s, wearing an article of male clothing, such as a necktie, hinted at feelings of equality.

People are often outraged by clothing that doesn’t meet their gender expectations, even in San Francisco, a city famous for its “live and let live” attitudes. (I saw a dozen nudists bicycling past the zoo last year. No one bothered them.)

The local news stations and the San Francisco Chronicle are running stories about high school senior Jessica Urbina, whose photograph was removed from her high school yearbook because she chose to pose in a tuxedo instead of a photographer’s “drape.” Her private school, Sacred Heart Cathedral Preparatory, has a rule that all girls must have their senior picture taken wearing a “drape” and all boys must be photographed wearing a tuxedo shirt, jacket, and tie. As reported in the Chronicle, the Archdiocese of San Francisco has a policy “requiring female students to wear dresses in yearbook photos.” (Technically, a ‘drape’ is not a dress — it’s a photographer’s prop that just suggests a dress from the waist up.  And I doubt that many young men have a tuxedo in the closet, or wear one often. Both of those options are quite arbitrary — they are merely an attempt to get a uniform, non-individualistic image of each student by banning their own clothing. So yes, Jessica did make an attempt to subvert the rules, by showing a little of her real self, and appearing as she would want to be remembered.) 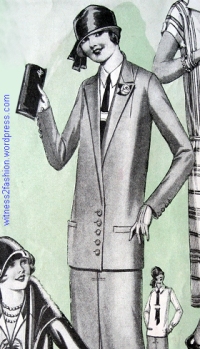 The inspiring part of this story is that, when they heard the news that Jessica’s picture would not appear in their yearbook, the students at Sacred Heart came to school wearing neckties, regardless of gender. They wore neckties with their tee shirts. They wore neckties with their blouses. They wore bowties and long ties. Jessica said, “I’ve never felt more love than I do right now. I’ve seen people with all the ties. Honestly, I’ve cried multiple times, overwhelmed with all this support, so I just want to thank everybody who’s supporting me now.”

“Late in the day, school officials said the events had ‘sparked a campus-wide dialogue which will result in a revision of policy.’ ” although it may not take effect immediately. — News Article: Students Rally Around Tux-Wearing Teen Left Out of Yearbook by Jill Tucker and Henry K. Lee

I’ve posted these illustrations from 1925 — when women were casting off old, gender-defined roles and taking on traditionally male occupations — as a reminder of how long it can take to break down cultural expectations about clothing and gender. The language of clothes is so powerful that people can still feel threatened by a woman wearing a tuxedo, or a man wearing a skirt. Yes, clothes do make a statement about the wearer. It sounds like Jessica knows who she is, and wants to ‘speak’ the truth. How encouraging that her classmates respect her for it.

I wrote such a long post about shoes from the Spring of 1936 that today I’m just going to share a great quotation from Leah Garchik and some color pictures from an Art Deco shoe ad dated 1929.

From an advertisement for Arch Preserver Shoes:

“According to the Table of Shoe Hotness, any brand that promises comfort will add 10 years to one’s WEA (Wearer’s Estimated Age.)” – Columnist Leah Garchik, writing in the Style section of the San Francisco Chronicle.

Some Arch Preserver Shoes from 1929

I wouldn’t mind wearing either of them – except that I had to move on to prescription, flat shoes with rigid orthotics in them years ago. My WEA – and my actual age — are now both too high to lie about! The travel-themed designs (a navy blue print fabric?) behind the shoes is very jazz-age.

An afternoon dress and 3/4 length coat that survived the 1906 earthquake and fire in San Francisco have been discovered in a marvellous state of preservation. Read about them  and see very good pictures from the San Francisco Chronicle at sfgate.com. There is a slide show which includes more pictures than the newspaper article I read at breakfast.

The ensemble was to be worn to an opera matinee on the day of the quake. When the owner fled her home in the early morning, she wrapped these garments in a curtain and took them with her.  Somehow they survived weeks of camping out and a century in storage. The cream silk coat has beautiful Art Noveau passementerie trim. The black dress is a lacy confection, but it has survived for 108 years.