The Second Dart: A 1920’s Pattern Alteration for Busty Women 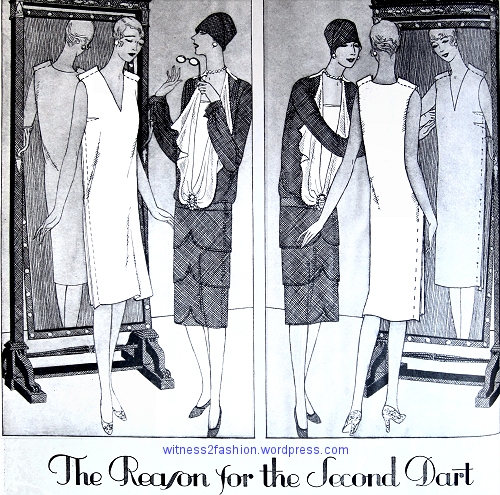 “The Reason for the Second Dart,” by Sarah Churchill. From a series about sewing pattern alterations that appeared in Butterick’s Delineator magazine in the 1920’s. This is from the July 1927 issue, page 26.

We tend to think of nineteen twenties dresses as shapeless tubes, but that’s not necessarily true. Dresses might have shirring or smocking or pintucks to create a small amount of fullness over the bust, or they might have a small bust dart — or even two!

This brief article from Butterick’s Delineator magazine shows how to alter a dress pattern to accommodate a full breasted figure.

The woman with a lorgnette (!) advises her friend on the way to eliminate a fitting problem caused by a larger than average bust.

The cut out dress is pinned together and tried on inside out. You can see that the pattern does have a bust dart in the side seam, but the dress fits poorly. The side seam curves toward the front. (And the dart seems too high….)

” ‘I cut this dress by those instructions you are always cheering for,’ announced the young woman of the illustration, ‘but it scoops in under me in the back and sticks out in front, and whatever does this queer long wrinkle mean?’ It meant, that ‘queer’ wrinkle, running from the bust to the underarm seam in a long curving sweep, the the frock was pushed out of place by the bust. This in turn, meant that the bust is larger than is average. The type of figure which is very full in the bust is often correspondingly narrow through the back, and the sum total of inches registered by the tape measure will indicate an average size for a figure not actually average.” — Sarah Churchill

This reminds me of the fitting room saying that “The wrinkle points to the problem;” that long wrinkle starts at the side seam and points up, toward her bust point.

This woman does not have an “average” twenties’ figure. (And clearly, she is not wearing a bust flattener.)

The problem of buying patterns (or, worse, brassieres) by the measurement taken around the fullest part of the bust is not new to me. A friend who is 5′ 10″ and athletic wears a size 38 A bra. She has a big ribcage (37″), a broad back, and small breasts. But another woman who also measures 38 inches around the fullest part of the bust may have a narrow back, a 34 inch ribcage and large breasts. Her bra size would be 34 D. And that is the kind of figure that the woman in these illustrations has.

“However, all is not lost. The frock merely needs a little adjusting — another dart to the front at each side.” 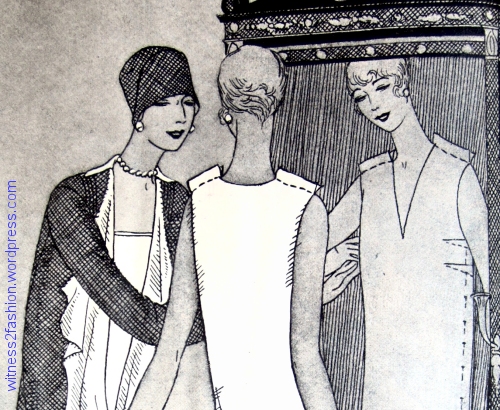 The extra fabric that created the long wrinkle is pinched out by unpinning the side seam and creating a second bust dart, which pulls the side seam into a line perpendicular to the floor. Delineator article, July 1927.

“This gives the bust the room it needs and the frock falls as it should. The back is now an inch or so longer than the front. We shall cut this off with a free hand swing since it is a one-piece frock and no complications to be encountered, and all will be well. The frock now hangs smartly. In this case, chic depended on a little dart!” — Sarah Churchill, Delineator, July 1927, p. 26. 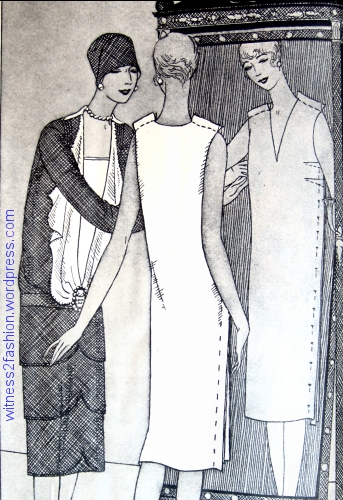 After the second dart is created, the side seam hangs correctly and the full bust does not distort the dress.

“To those who wonder why I did not deepen the dart already in the frock, I would point out that a second dart distributes the fullness with better effect. [W2F: I also suspect that, since the dress is already cut, there might not be enough seam allowance for one, deep dart.] However, if the frock had started out with two darts, I would have deepened both evenly…. For the depth of the dart, experiment until the frock hangs straight.” — Sarah Churchill

Churchill goes on to explain that, if the back of the dress were not one, simple piece — [if, perhaps, it had a hip girdle or a separate, pleated skirt piece] — then the whole back would need to be recut, eliminating the extra inch by placing the pattern on top of the fabric and recutting the neck, shoulder, and armholes to raise the back by an inch (or whatever length the extra dart had removed in front.)

Before and after the dress alteration which added a second dart. Delineator, July 1927, p. 26.

For anyone who has ever struggled to recreate 1920’s styles — under the assumption that bust darts were never used — this advice from 1927 should make you feel better. Here’s a 1925 illustration of a suit from Chanel — with a bust dart.

Filed under 1920s, Resources for Costumers, Tricks of the Costumer's Trade