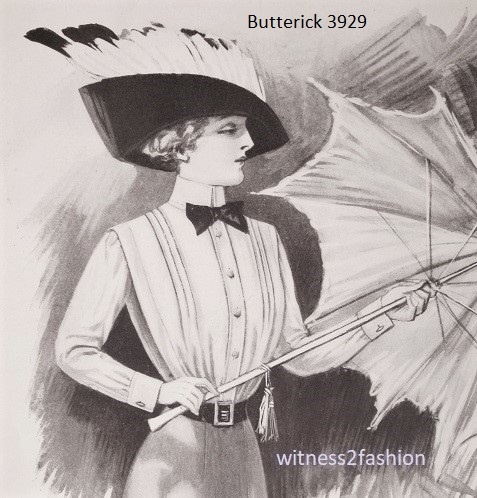 “In number 3929 we have a very chic tailored shirt-waist or shirt-blouse in Gibson style, suitable for sporting and all other general use. The three narrow tucks in each front mark this waist with a distinctiveness of its own as well as giving a pleasing amount of fullness across the bust. Both the one-seam leg-o’-mutton and regulation shirt-waist sleeves are suitable for a model on this order, and these may be made in the full or three-quarter length.” 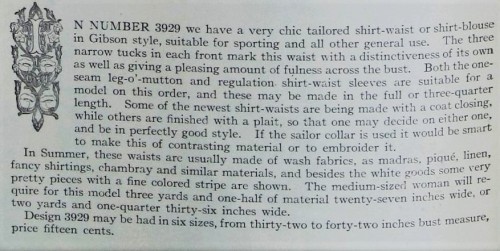 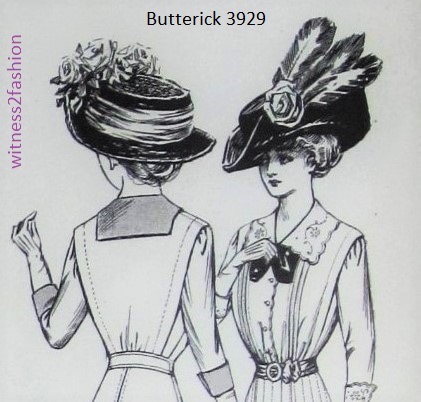 Alternate views of Butterick 3929, including a tiny “sailor collar” with bare neck. 1910. 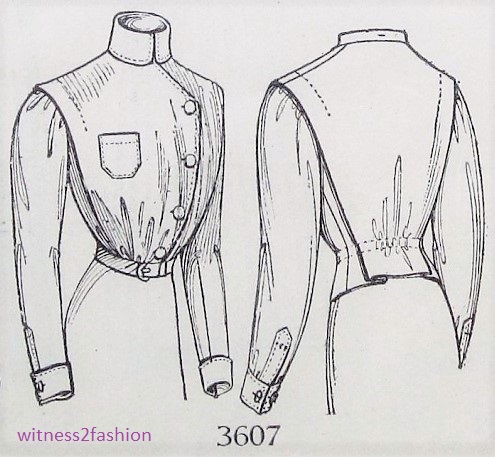 Butterick 3607 is another “Gibson effect” shirt-waist. Delineator, February 1910. Here it has a masculine detachable collar. In back, the shoulder tucks create a slenderizing V shape.

“Probably there is no style of shirt-waist which women like better and find more becoming than the ones in Gibson effect, these making the wearer look broader, besides having a chic style of their own. An especially good shirt-waist, on this order, is shown in No 3607, a model having a very smart front closing. The more elaborate waist would be embroidered in some such manner as shown here, the Dutch collar and French cuffs both offering a splendid opportunity for this handwork, while the plainer model would be finished with the neck-band for wear with separate collars, and the regulation shirt-waist sleeve.” 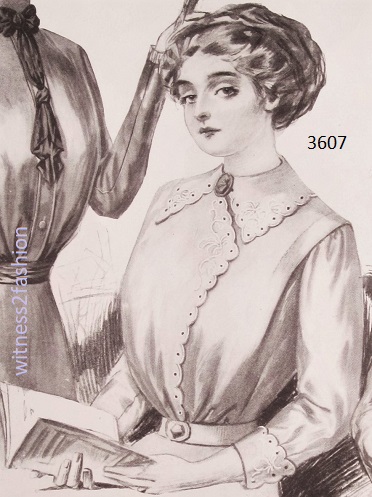 “Gibson effect” shirt-waist No 3607 illustrated with “Dutch collar,” side front closing, and embroidery.

Charles Dana Gibson drew marvelous pen and ink sketches and cartoons of the American girl, a tall, regal presence who excelled at sports and sometimes dwarfed the men around her. As the term was used in Delineator in 1910, the “Gibson” shirt-waist seems to be one with wide tucks extending over the sleeve cap, like those above. 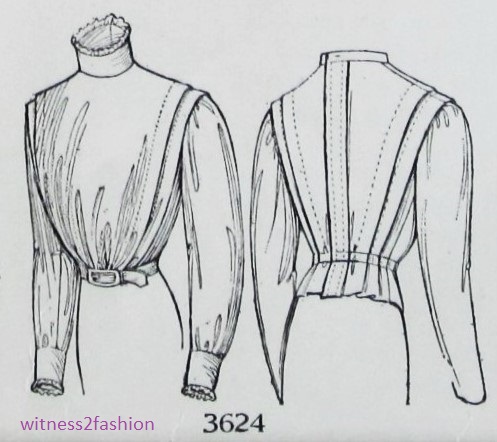 This Gibson shirt-waist fastens down the back, but has shoulder-widening tucks. Butterick 3624, Feb. 1910.

“A rather plainer model on the shirt-waist order is shown  in No. 3624, and this is a design which offers a splendid opportunity for some very effective embroidery. The tucks, arranged in Gibson style, extend slightly over the sleeves and give that broad effect which every American women desires.” 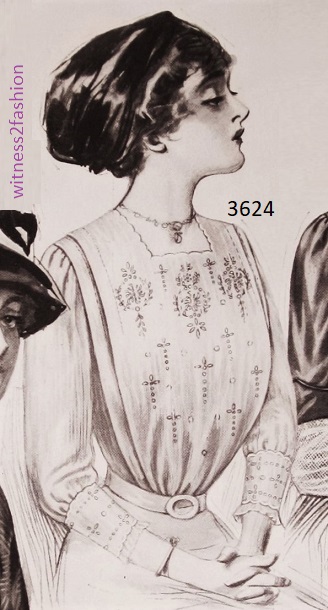 The bare, square “Dutch” neckline was a daring change from the previously high collars. “This is a waist which may be finished with the high neck and standing collar, the neck-band for wear with other separate collars, or the Dutch square neck. With the square neck and short sleeves, the model would be appropriate for home wear….” 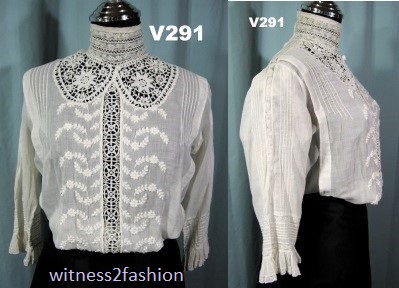 This lacy, embroidered vintage blouse has wide “Gibson” tucks at the shoulders. 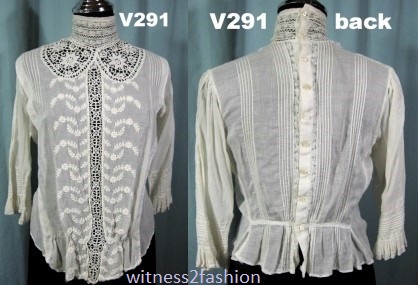 The very long front allows for the “Pouter pigeon” look when it’s tucked into a skirt. 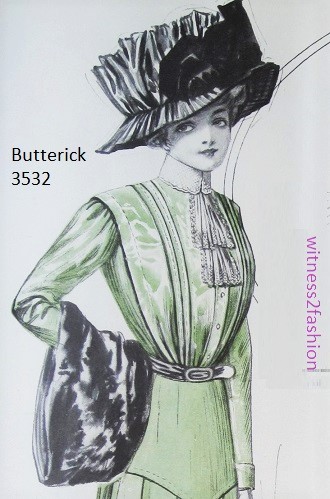 “Wide tucks on the shoulders give the Gibson effect of waist No. 3532, and the cluster of three narrow tucks on each side make the only trimming that is necessary….”

The tucks are very wide on this vintage blouse, and the back view shows the optical illusion created when they converge in a V shape: 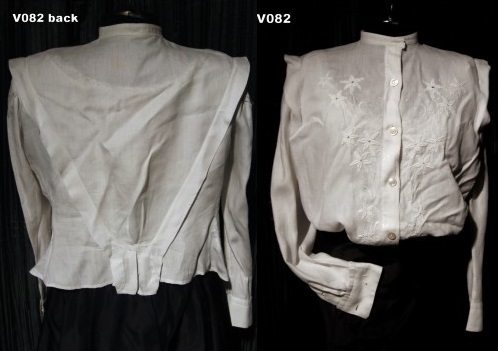 This “Gibson effect” waist would have been worn with a stiff, detachable collar. 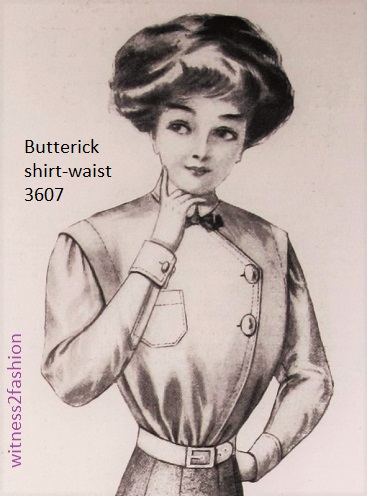 Another illustration of Butterick’s “Gibson” waist 3607.

Although shirt-waist 3595 (below) is equally businesslike and tucked, the tucks do not extend over the sleeve head. No. 3595 was not described as a “Gibson” shirt-waist. 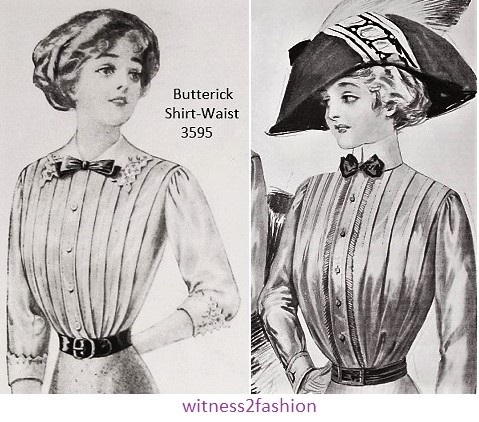 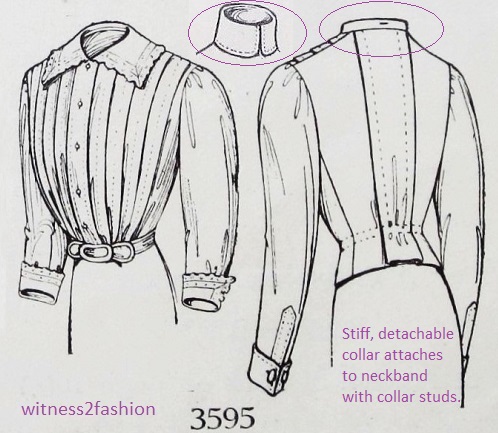 Both men and women wore detachable collars, sometimes made of paper or celluloid.

There is a surprising and well-illustrated article about celluloid collars at the National Museum of American History.  (click here.)

I just discovered the very good National Museum of American History website, which has a section on clothing and American history. As usual, the story of everyday clothing can be a doorway into history — as in this article about hats and shoes in Greensboro: Freedom’s Tally: an African American business in the Jim Crow South.

Digression: while I’m thinking about tiny, everyday objects that bring the past to life…. Some time ago I mentioned mudlarking in Victorian England. (Mudlarks eked out a living by searching for saleable trash in the Thames river.) 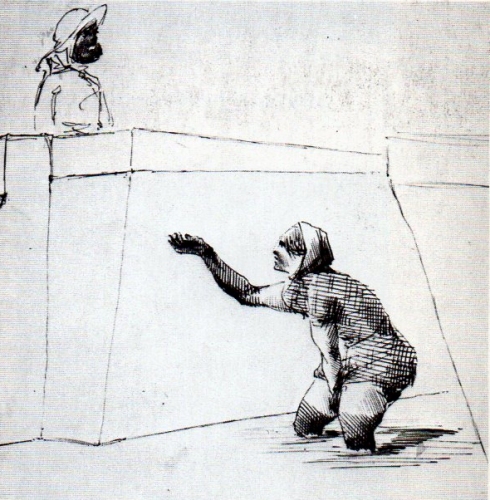 “Mudlark girl. Coalheaver gives her remains of his dinner. From life. 1855.” Sketch by Arthur Munby from Victorian Working Women. (All the raw sewage of London flowed into the Thames. Even bits of coal were saleable.)

I often watch videos by Nicola White, a modern day mudlarker and artist. This one brought the past to life for me…. (There may be lots of commercials, but White always researches her finds — like this “forget me not” token inscribed by a 10 year old girl convicted of felony and sentenced to 7 years in prison in 1844.)

As a girl, I hated history classes. I wish I had been shown a doorway into the lives of ordinary people — like the ones available now.