Agnès (also known as Madame Agnès)  was one of the most fashionable French hat-makers of the 1920’s and after. (Click here for more about her label.) Here is one of her tight-fitting evening turbans from 1929. 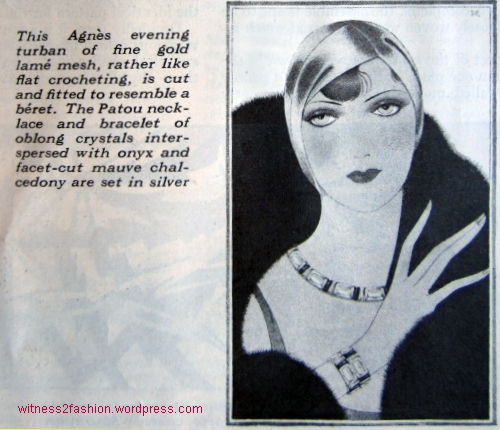 The Metropolitan Museum has several hats by Agnès:

Hats like this were often worn tilted far to the front of the head, over one eye.

However, bigger hats, often with an elongated crown like this one by Agnès, were also worn in the 1930’s. ( Schiaparelli also designed hats like men’s fedoras, but with tall, narrow tops like this.)

The two hats by Madame Agnès pictured at the top of the post have a lot in common with these styles, but the Agnès hats were cleverly constructed so that they could be deconstructed and flattened, or rolled, to fit in a suitcase.

In her “Letter from our Paris Fashion Correspondent,”  Marjorie Howard described two hats by Agnès, one that snapped together (above) and a hat that rolled into a long strip, and zipped into shape using a slide fastener.

Here’s how Marjorie Howard described the “snapper” hat, above:

“Large snap fastenings, the original ones in translucent green on black felt, run down the side of the crown which is just a flat piece when they are undone, and join the two ends of the brim. Two flat bits are all that remain when the snaps are open and they pack as easily as a scarf or handkerchief. A clever woman could construct the snapper hat for herself; though I am not sure that she could succeed with the other one.”

This hat by Agnes (1937) is held together by a long, continuous zipper (slide fastener) and can be unzipped and rolled up for packing.  Woman’s Home Companion, Oct. 1937.

“The cleverest I have seen lately are Agnès’ two felts, intended primarily for October weekends when you travel in a car and must curtail your luggage. Both of them come to pieces and pack flat or in any suitcase corner. One  is a long curved strip of felt with metal slide fastenings cleverly disposed along the edges. You begin at the top, slip one end of the slide fastening into the other and wind spirally till your hat emerges, crown, brim and all. And it really works for I have tried it. To pack you unzip and roll the strip into a ball….

“It is pretty tricky to cut. Agnès told me that it took her three weeks of experimentation to work it out properly. The curve has to be accurate as an engineer’s working model.” — Marjorie Howard, Woman’s Home Companion, p. 81; October 1937.”

Although Howard says she zipped this hat up starting at the crown, the fact that the illustration shows the zipper pull at the top of the hat implies to me that that was where the zipping ended, as when you zip up the front of a jacket. Or perhaps the illustrator took liberties.  The dressesandhats blog has a bigger, better picture of the Zipper Hat.  Click here.

American Charles James designed a dress with a zipper that spiraled all the way around it in 1929(!), but I don’t think practicality was his main goal.