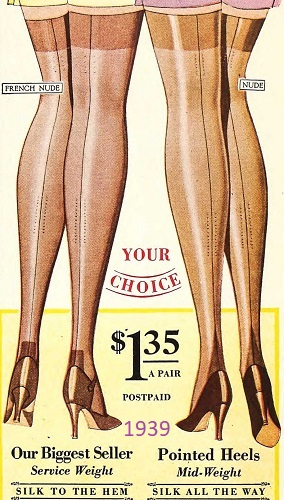 Every costume design job is an opportunity to do more research, but there are some things that are just part of your general knowledge. For example, when I was hired to costume a college production of Brighton Beach Memoirs, which takes place in 1937, I automatically put the adult female characters in seamed stockings.

I was surprised recently when I came across this image from 1930: 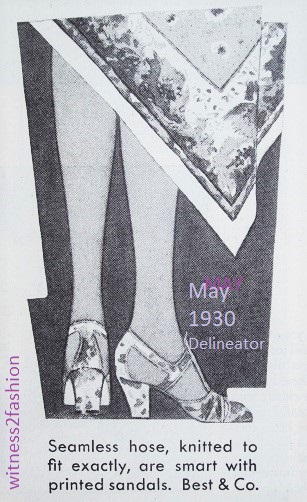 Seamless stockings could be purchased at department stores in 1930! This image is from Delineator, May 1930.

I simply hadn’t come across this information before, so I checked another source: the Sears, Roebuck catalogs. There they were: 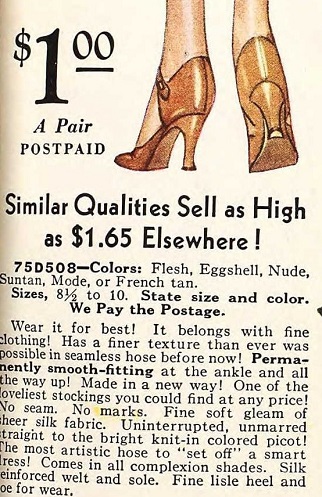 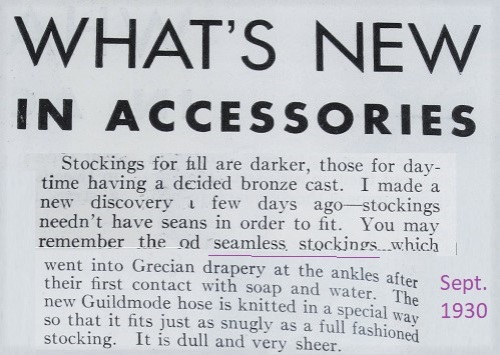 From a fashion editorial about accessories, Delineator, September 1930.

There are some typos in the original text, as you can see, but corrected, it says, “I made a new discovery a few days ago — stockings needn’t have seams in order to fit. You may remember the old seamless stockings … which went into Grecian drapery at the ankles after their first contact with soap and water. The new Guildmode hose is knitted in a special way so that it fits just as snugly as a full fashioned stocking. It is dull [matte] and very sheer.”

“Full-fashioned” meant stockings which were shaped like the outline of a leg, curving in at the ankle, and gradually curving out over the calf area.

Before stretchier knits became available, the seam at the back was necessary for a good fit. Full-fashioned stocking illustration from Sears, 1958.

A short history: Knitted stockings have been around for hundreds of years. The simple knitted tube naturally stretched — somewhat — to the shape of the leg, but a seam up the back permitted a closer fit.  As stockings became more sheer (and more visible under short skirts) in the Nineteen Twenties, women became aware of the way the vertical seam up the back created a slenderizing line on their legs. 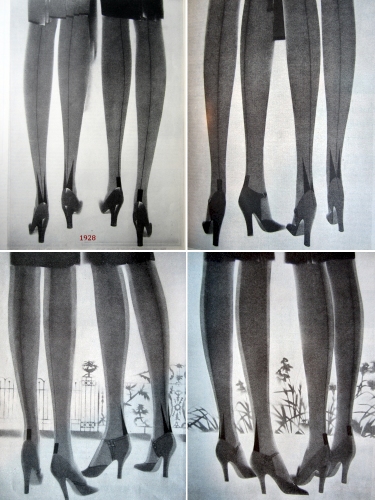 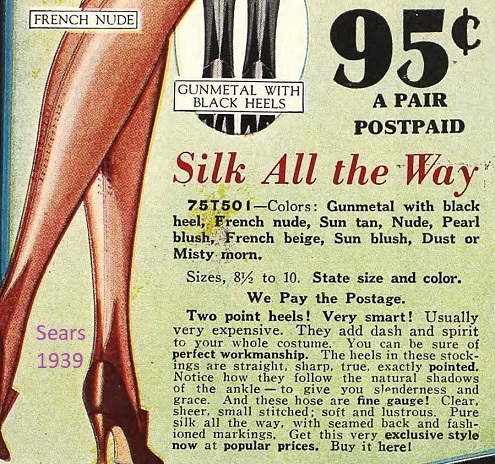 Seams and pointed heels made these stockings flattering. Sears, Fall of 1939.

“Notice how they follow the natural shadows of the ankle — to give you slenderness and grace.”

Skirt hems went down and then up again in the Nineteen Thirties, but seamed stockings were so much a part of normal dress that women couldn’t give up that seam line even when silk or nylon stockings became unavailable during World War II. 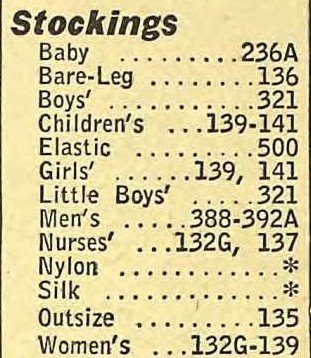 There were no nylon or silk stockings available from Sears in 1944 because nylon and silk were needed for the war. Sears catalog index, Spring 1944. 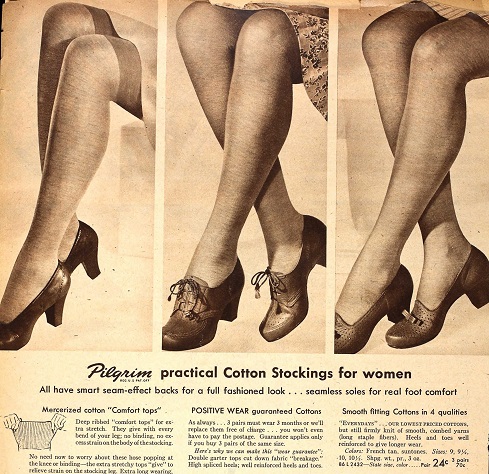 In Spring of 1945, before the War ended,  Sears offered these un-glamourous cotton stockings. Three pairs were guaranteed to last you three months. (I.e., you would have two wearable stockings left.)

But, back to the Thirties: 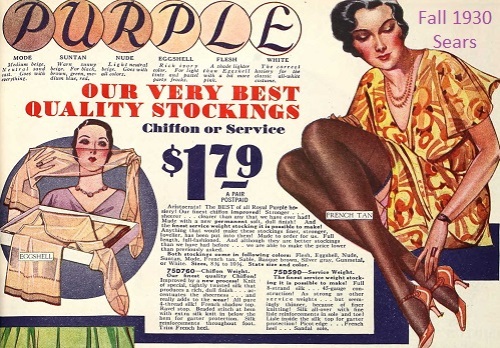 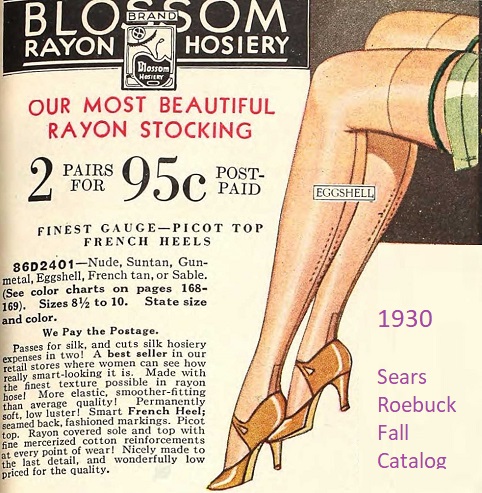 Seamed rayon stockings from Sears, Fall 1930. Rayon, a synthetic fabric based on cellulose, was cheaper than silk.

At the first dress rehearsal of Brighton Beach Memoirs, the director knelt down beside my chair and whispered, “Are those seams on their stockings?” He was clearly delighted. I whispered back, “Well, stockings with seams are too expensive for our budget,** so I taught the actresses to do it the 1940s’ way: we drew ‘seams’ up the backs of their hose with an eyebrow pencil.” (The lines didn’t come out completely when we washed their sheer tights, so they just had to retrace the previous line for the next performance.)

At first, I thought the director was impressed by the seamed stockings because I was much more detail-oriented than my predecessor. Later I realized that anyone who was a teen-aged boy in the 1950s probably feels a certain nostalgia for seamed stockings, which, along with high heels and garter belts, were often seen on pin-up girls.

This 1950s’ stocking ad, shared by Sally Edelstein at Envisioning the American Dream, shows the sex appeal of seamed stockings.

Being allowed to wear high heels (or even kitten heels,) and sheer stockings held up by a garter belt was a rite of passage for girls of my generation. (I think that my first heels and stockings were required for a school field trip to the ballet [or opera?] circa 1958, when I was in 8th or 9th grade.) 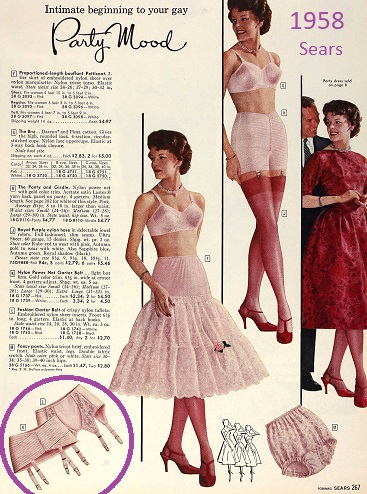 Garter belts, seamed stockings, high heels, and a bouffant “crinoline” petticoat in 1958: “Today I am a woman!”

At thirteen, I was finally old enough to ask, “Are my seams straight?”

To return to my costume design for Brighton Beach Memoirs, would this new (to me) information about the existence of seamless stockings*** in 1930 have made any difference? No, because the characters in the play are struggling financially, and because they are not fashionable women. They would have worn inexpensive stockings — probably cotton, rayon, or “service weight.”

Service weight silk stockings were not as sheer as “chiffon” ones. Sears, Fall 1930.

I settled for using sheer tights with added seams because at the time of the production that was the most affordable option. Also, in college productions, most of the actors are younger than the characters they play. The two “mothers” were actually about twenty years old, and the teenaged daughters were also played by twenty year old actresses. Putting the mothers in seamed stockings and the daughters in bobby socks helped to establish an age difference.

More of my own “Garter Belt and Seamed Stockings” Memoirs to come….

** Some very good costume shop supervisors have told me that a seam can be added to inexpensive modern hosiery with an overlock sewing machine, but I haven’t tried it myself.

*** If you need a research topic, note that some of the images make reference to seamless stockings earlier than 1930.