This post started with sleeve patterns as its subject, but it grew into one about the widening of shoulders in the 1930’s…. If that’s your interest, just scroll down to 1930’s Sleeve Patterns.

Butterick periodically offered sleeve patterns as a way to give your dress a new look without much expense. 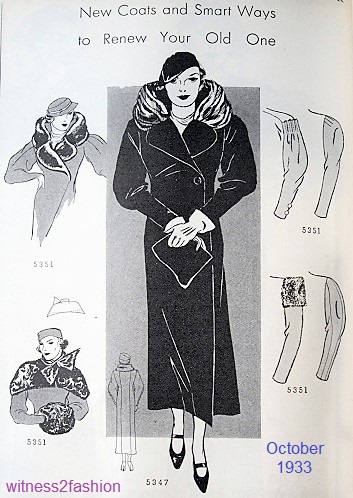 Changing the sleeves on an old garment doesn’t make any sense to me, because you would rarely have enough of the original dress material left over to make a pair of long sleeves…. Nevertheless, here is an assortment of sleeve patterns from 1917 to 1933:

“Design 9220 is a splendid set which will quite transform a dress that is slightly worn.” Unfortunately, I didn’t photograph the whole paragraph.

Butterick sleeve pattern 8954 from February 1917. There is a little visible gathering at the sleeve head — probably to be sure it would fit an existing armhole.

Here are some fashions from 1917 and 1918; would changing the sleeves have made much of a difference?

Butterick patterns, July 1918. The sleeves are varied, including some that are wide at the cuffs, and one version (top right) is slit.

Butterick patterns from July 1918. The green blouse has sleeves that partly cover the hand, like those in the “update your sleeves” pattern 9220 from 1917.

Sleeves in the 1920’s were usually simple, fitted without fullness at the shoulder and close to the arm. However, some sleeves were sheer from the wrist to below the elbow, some widened, and some were split.

These dresses from 1926 have attention-getting sleeves. Delineator, July 1926.

Sleeves from the early 1930’s were often long but simple:

These dresses from February of 1931 have narrow, fitted sleeves. Delineator. 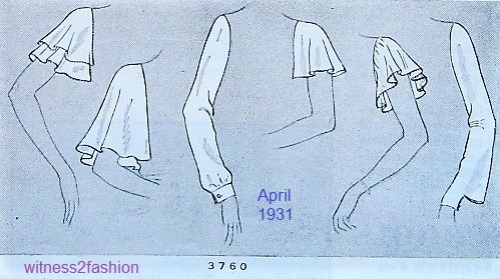 This 1931 pattern included some fluttery “capelet” sleeves, which really were a coming fashion. Delineator, April 1931. However, these sleeves start high on the natural shoulder, and don’t exaggerate its width.

Ruffles created a wider shoulder on many evening dresses after 1932. This ad for Lux laundry soap appeared in Delineator, June 1934. (Blame the fad for ruffles on the 1932 movie Letty Lynton.)

This writer saw a connection between smaller hats and bigger sleeves:

However, back in 1931, this article noted that as hat styles changed, they looked better with “period clothes, clothes such as were worn with them originally. Period styles have appeared, but they are mostly evening dresses. Something else happened, however, to make the new clothes look right with the new hats… wide sleeves and puffed sleeves.”

Sleeve variations, reported by Marian Corey in Delineator, Nov. 1931. “The puffs may occur anywhere on your arm — at the shoulder, at the elbow, at the wrist….But … There are still more frocks with straight sleeves than frocks with puffed sleeves.” [A ratio of 12:1.]

We can trace a slow increase in shoulder width from the 1930’s to 1940, but from my small sample it appears that wide shoulders and gathered sleeves (except for the frilly ones on formal dresses) were a gradual style change between 1931 and 1937, starting with evening and outerwear.

Delineator reported the return of the Gibson Girl sleeve as early as April 1933, pg. 73.

Also in 1933, coats and jackets with fur accents or extensions at the shoulders were being featured, and not necessarily to accomodate fuller sleeves on dresses: 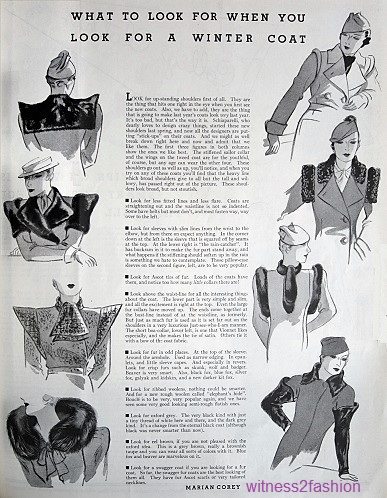 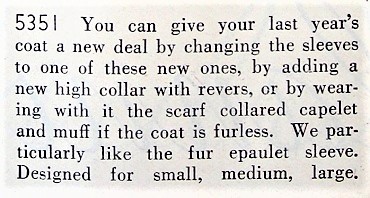 By 1935, even dresses appear to have wider shoulders — it would be hard to get this silhouette without using shoulder pads: 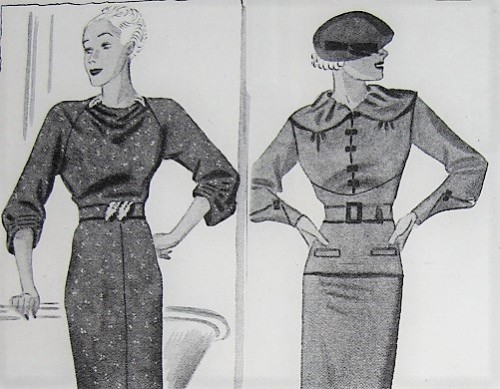 A selection of Butterick dress patterns from February, 1936; Delineator. Shoulders are definitely broader, at least as illustrated.

By 1937, exaggerated shoulders with sleeves that are full at the top are standard features, as these patterns from a Butterick store flyer illustrate.

Dress patterns from Butterick News Flyer, December 1937. These sleeves are not droopy, but probably supported from the inside with a pad or ruffle.