Companion-Butterick Pattern for Short Misses, May 1937 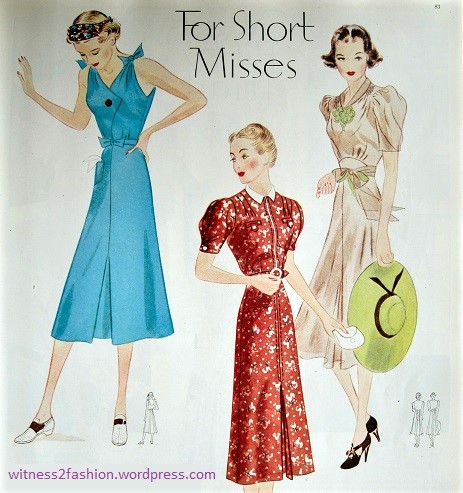 Three very different dresses “for Short Misses” from one “Triad” pattern, Companion-Butterick 7361. Woman’s Home Companion, May 1937. [These women do not look short….]

The Woman’s Home Companion often featured “Triad” patterns, which promised three styles from one Butterick pattern. This one, Companion-Butterick 7361, is unusual in that the styles are so very different from each other. The flattering center-pleat skirt is shown with and without top stitching, in crisp or soft fabric, but it’s recognizably the same pattern piece. The bodices, however, have very little in common.

Left, Companion-Butterick 7361 in a sleeveless version with tied shoulders and a sharply angled front.

The armhole seems to echo the pointed front. Bows at the shoulders are repeated in the belt. There is a small, angled bust dart at the side, but most of the bust fullness is supplied by fabric gathered at the shoulders. The “sunback” opening is square.

A zip-front version of Butterick 7361 has top stitched pleats and a crisp white collar to match its white zipper and belt buckle. WHC, May 1937. The editors called this a shirtwaist, but suggested “you can twist pearls over the shirt collar of the print.”

In 1937, zippers on relatively dressy dresses were a new idea. (And zippers were not always available in a wide range of colors.) This dress is not active sportswear, nor is it a housedress or work uniform. The small white clutch purse hints that this could be worn shopping, or out to lunch. In this version of Butterick 7361, the bust fullness is controlled by two parallel tucks at each shoulder. Tiny (false?) pockets with tabs have white buttons to match the buttons on the puffy sleeves.

The third version of this dress is definitely the most formal. 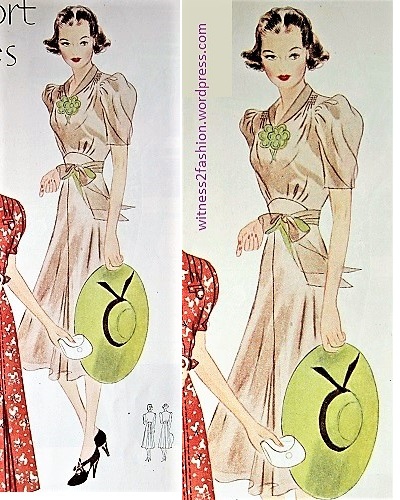 A formal afternoon dress version of 7361 is illustrated with a sheer over-layer, which could have long sleeves. WHC, May 1937.

In this version, the bodice has a shaped waist with the fullness softly gathered to it. The shoulder area is shirred. The modestly V-necked collar is trimmed with artificial flowers, and the belt has become a sheer sash tied in a big bow.

Sometimes WHC illustrators drew shoes supplied by their advertisers, but I can’t find an exact match from this issue. 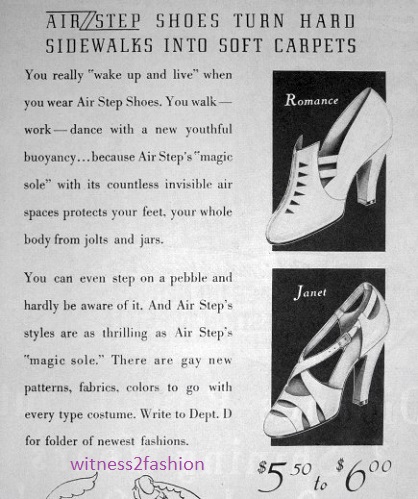 Air Step shoes ad, with prices, WHC, May 1937. The high heeled sandal on the right is very similar to the black shoes shown with the afternoon dress version of 7361.

Cabana shoes from Walk-Over, from an ad in WHC, May 1937. Perforated shoes for summer. The “Ardwyn” style was patented.

I tend to think of white, perforated shoes as “old lady” shoes, probably because my grandmother still wore them in the 1950’s. But the two-tone “Caribee,” above right, right does not have wide, low, “old lady” heels. 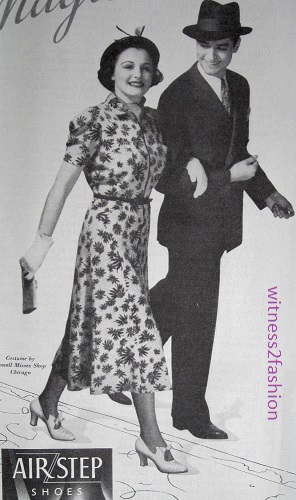 A store-bought, zip-front, print dress similar to Butterick 7361 is worn with stack-heeled white shoes by the model in this ad for Air Step shoes. WHC, May 1937.

For casual shoes, Keds (United States Rubber Co.) made many attractive cloth shoes in the 1930’s.

This similar “Kedettes moccasin,” in white and navy, is from 1938:

I love those striped soles!