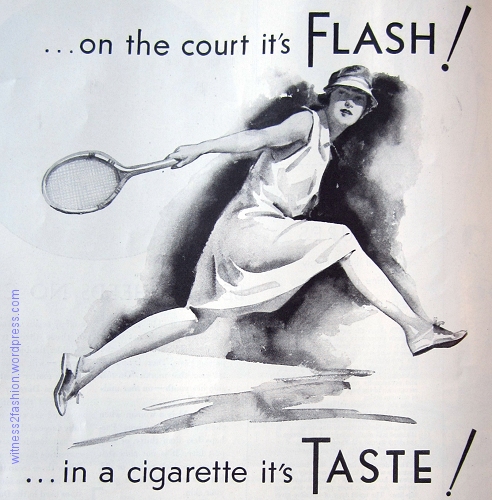 I am no authority on tennis or any other sport. I just have a batch of images to share — more than will fit into one post.

When I began playing tennis for fun, around 1971, I thought you were supposed to wear white on the court. In fact, my tennis partner and I felt quite daring because we were wearing the new white-piped-with-color tennis outfits, like this one.

Now, of course, women players like the Williams sisters appear in tournaments wearing comfortable stretch fabrics and brilliant hues. If some of the period illustrations I’ve come across are accurate, wearing white is a fashion that comes and goes (although casual play is different from playing at Wimbledon, where the dress code is strict.) 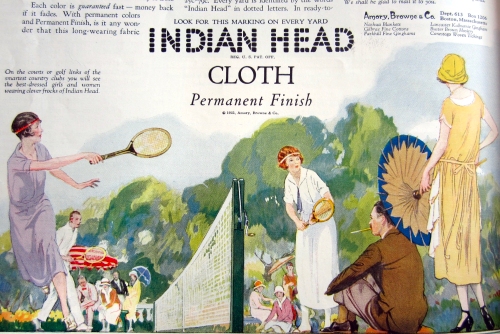 Tennis game in an ad for Indian Head Cloth, May, 1925. Delineator.

For informal games in the 1920’s and earlier, both spectators and players apparently had the option of wearing colorful clothing. 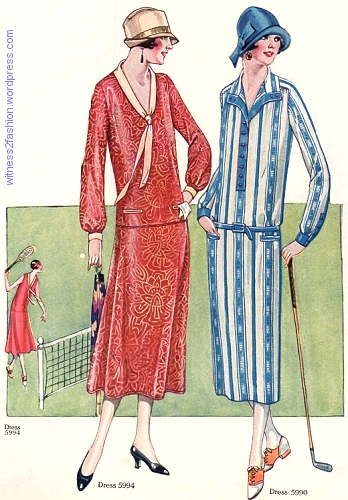 A sleeveless version of the red print dress is shown in the background, worn by a tennis player.

“5994:  If you omit the sleeves, this slip-over frock makes a smart tennis costume, for the two-piece circular skirt fastened at the hip-line allows freedom for running, etc. ”

Of course, tennis rackets, golf clubs and parasols were often used in pattern illustrations as as way of emphasizing the season, and may not be taken too literally. Another illustration of the blue “golf” dress above (No. 5990)  is shown with a tennis racket a few pages later — in a shorter version for a younger wearer. It does not seem well suited for running or leaping.

Nevertheless, prints, stripes, plaids and colors all seem to have been acceptable — possibly chic — in a friendly game.

Masthead illustration of a tennis game, Delineator, July 1928. The model below wears a very similar pleated skirt and patterned top.

Although she has both a racket and tennis balls, her shoes don’t look appropriate for active sports. (Rubber-soled shoes were available. Click here for some vintage Keds.)

Pattern description, Butterick No. 6088. Tennis is not mentioned, nor is golf.

How Did They Do It? Some Earlier Tennis Outfits

For photographs of a tennis player actually dressed like this, click here. Playing tennis while wearing  a bustle, a corset, petticoats, and long hems, like this, must have required immense agility and balance. Not to mention stamina….

It was quite a handicap, as cartoonist George du Maurier noticed in 1877: 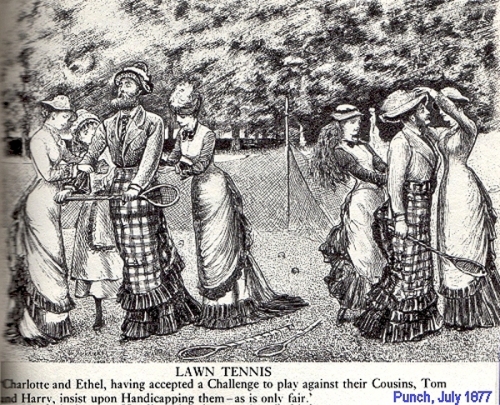 1877 tennis cartoon by Du Maurier. “Charlotte and Ethel, having accepted a Challenge to play against their cousins, Tom and Harry, insist upon Handicapping them, as is only fair.”

Cartoonists also noticed that athletic young women — even those who scorned to play tennis wearing corsets — found male admirers. [Caution: This is a cartoon, from Punch magazine, not a photograph….]

Tennis without corsets, Caricature, 1879. “They have given up stays altogether…. [and] are all engaged to Dukes. “

The full caption says, “The O’Farrell – Mackenzie girls have gone in so extensively for early-rising, fresh air, cold water, farinaceous food, rowing, riding, rinking, lawn-tennis, gymnastics, and what not, that they have distorted their figures into the likeness of so many Greek statues, and have no more waist to speak of than that quite horrid Venus at the Louvre; indeed, they have given up stays altogether as a bad job. As they are all engaged to marry Dukes, Mr. Punch fears they will set the fashion; and as he holds that a long and wasp-like waist is as essential to a lady as a — well, as a hump between the shoulders, a prominent nose and chin, and a protuberant abdomen are to a gentleman, he hopes that the above caricature may serve as an example and a warning.” [Illustration from The Way to Wear’em, by Christina Walkley.]

The idea that a woman’s body should support itself without stays (boned corsets) — thanks to healthy exercise — was a principle of the Jenness-Miller magazine. This is a Jenness-Miller pattern for lawn-tennis, 1890. 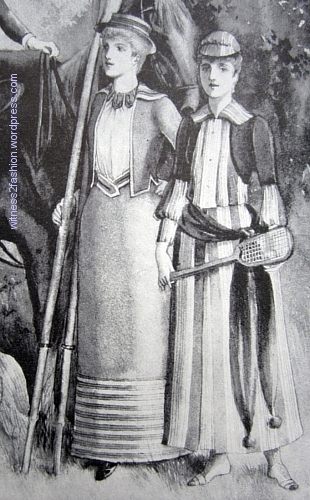 Two decades later, British tennis champion Charlotte Cooper Sterry managed not to trip on her skirts, winning five singles titles in outfits like this one: 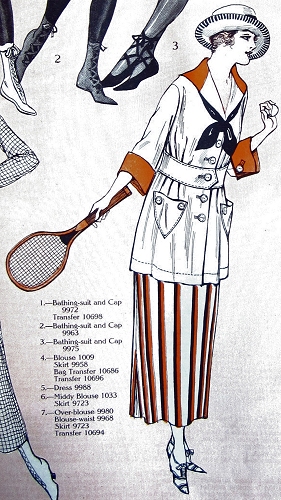 “Behind the tennis net a middy blouse and striped skirt do their part … championship in sport and fashion.”

In this 1925 advertisement, the male player wears white; one woman wears a white middy or dress with pleated (?) skirt, but the other wears lavender –and recognizable tennis shoes. 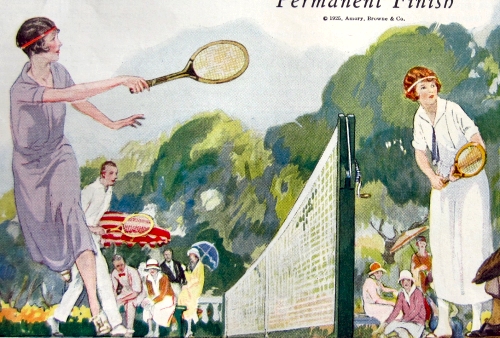 Indian Head Cloth ad, May 1925. Detail. Most of the women in the background — probably waiting to play — are wearing white.

“Gradually, white for tennis became a rule, so that in 1890 Wimbledon mandated all-white outfits for players. Elsewhere, the all-white tennis outfit became a decorous standard by the early 20th century — just in time, by the way, for the Frenchwoman Suzanne Lenglen to aggravate rich people everywhere by playing tennis in a (white) calf-length skirt and short sleeves.” — Emily Chertoff, writing in The Atlantic. Click here.

(Another theory is that white doesn’t show sweat stains as badly as colored fabrics.)

Lenglen wore many outfits designed by couturier Jean Patou in the 1920’s, which helped to popularize his sporty sweaters and skirts.  Lenglen first appeared at Wimbledon in Patou’s short white silk pleated skirt and a sleeveless cardigan in 1921. According to Brenda Polan & Roger Tredre, her outfit created a sensation and introduced the sporty, boyish look known as the “garçonne.”

Patou took credit for shortening skirts to the knee in 1925; he was one of the first designers to put his monogram very visibly on his designs — monogrammed cardigans, scarves, etc. This was a clever move, since without the monogram his relatively simple sportswear — sweater, skirt, and matching scarf — would not have proclaimed its price. [Sometimes I’d like to go back in a time machine and strangle Patou, but then I realize that somebody else —  probably his arch-rival, Chanel — would have invented the merchandising of Monogrammed “Designer” Everything if he hadn’t done it.]  For a concise history of Patou, see The Great Fashion Designers, by Polan and Tredre.

The outfit on the right shows Patou’s influence. The woman is wearing tennis shoes and socks, so perhaps she is not merely a spectator. Delineator, May 1929.

If you couldn’t afford couture, you could put your own monogram on your clothing.

The influence of Patou, as stated by Polan and Tredre, may explain why it’s not always easy to tell spectator sportswear from active sportswear in fashion illustrations. Which of these ladies are playing, and which are spectators?

More about these patterns later.

For a slide show of historic tennis dress at Wimbledon, click here.  K. Shriya Sharma has written a chronology of women’s Wimbledon fashions in the Times of India. Click here to read it.