A recent blog on Pattern Vault showed Schiaparelli patterns from Authentic Paris Pattern Company that did not use phrases like “after Schiaparelli” or “Schiaparelli-influenced,” which are usually indicators that the pattern has been adapted from an original design, with varying degrees of participation or permission from the designer – sometimes, none.  Betty Kirke’s extraordinary book, Madeleine Vionnet, tells us that:

“In 1922, [Vionnet] brought action against Butterick Publishing Company, claiming infringement of pattern rights. Police raided the Paris branch of Butterick and found a staff of designers converting her dresses into patterns.” (Kirke, p. 221)

[Five years later, Vionnet and Butterick were apparently on very good terms, since she even wrote an article for Butterick’s magazine, The Delineator, in 1927.]  Nevertheless, over the years, Vionnet filed many other lawsuits in an attempt to prevent manufacturers from selling unauthorized copies of her designs.

Is This Dress a Lanvin Designer Pattern?

This dress pattern, Butterick # 5870, was featured in Delineator magazine in August, 1934.

This caption does not use any of the usual ‘hedge words’ like ‘after Lanvin,’ ‘inspired by…,’ ‘in the manner of…’; it says “Jeanne Lanvin’s button-down-the-back dress, sensation of the Paris openings.” Does that mean Lanvin authorized this pattern?

Is This Coat a Schiaparelli Designer Pattern? 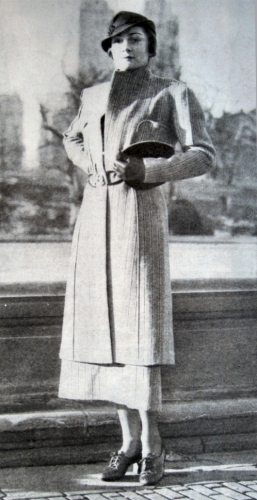 The caption, however, says “This is Schiaparelli’s newest silhouette. Even in the calmest weather the forward streaming revers indicate high March winds blowing from the rear.”

Questions arise: This may be a Schiaparelli silhouette, but is this a pattern authorized by Schiaparelli? Is it an exact copy? Is it based on a sketch of a coat by Schiaparelli, or on a toile supplied by her? I can’t tell. [A toile is a prototype garment made of inexpensive cloth, from which a pattern for the real garment  is taken.]

Is This Dress a Schiaparelli Designer Pattern?

This dress pattern, Butterick # 5874, is presented in the same way as the Lanvin dress above, and in the very next issue of the magazine, September, 1934. But the headline and the caption use the words “in the manner” of Schiaparelli, which not quite the same as ‘Schiaparelli’s Tweed Dress.’

Vogue, Butterick, and McCall’s are now all one big company. The company history on their website  tells us that:

“While Vogue Pattern Book featured “couturier” patterns as early as 1937, these patterns were not exact reproductions of actual styles. But in 1949, Vogue Patterns announced “A New Pattern Service—Paris Original Models Chosen From The Collections.” The cover of that year’s April/May pattern book showed photographs of the styles chosen from the eight featured countries [couturiers?], among them Balmain, Schiaparelli, Lanvin, Jaques Fath.

“It was the first time originals from the Paris couture had been duplicated in pattern form. Vogue Patterns became the only pattern company licensed to produce designs from the world [sic] leading couturiers, establishing a precedent which continues today.”

And yet, The Pattern Vault has Authentic Paris Patterns that say “This pattern reproduces exactly the original garment of this design made in Paris by Schiaparelli.”  Sarah at Pattern Vault also has copies of the Authentic Paris Pattern Company booklets for sale on her Etsy store, so it is possible to read the articles in them. (I haven’t – I just discovered them.)  Until some scholar finds copies of the licensing agreements from all the pattern companies, we’ll just have to hope that the designers were participating and being recompensed. I’d welcome comments — I really don’t know the answers to the questions I’m raising.