1920s Orange and Black: Not Just for Halloween

It isn’t news that certain colors — and color combinations — go in and out of fashion. But the combination of orange and black is now so strongly linked to Halloween that it’s a surprise to find it on dresses for spring in the mid-1920s. 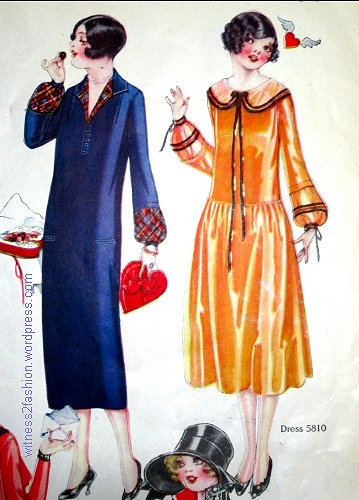 These young women are enjoying a box of Valentine’s Day candy. Early twentieth century color printing was not based on the CMYK [Cyan, Magenta, Yellow, and Black] inks we use today, so illustrations from the twenties often have an autumnal quality compared to the bright colors we are used to. Nevertheless, the red valentine hearts show that the dress on the right, above, is definitely orange, with black trim. The same color combination was suggested for older women, too:

Orange was also worn with dark blue in 1924 and 1925, but the woman on the left is wearing [burnt?] orange and black in this April pattern illustration.

This lovely illustration for a Holeproof Hosiery advertisement, by McClelland Barclay, appeared in May, 1925: 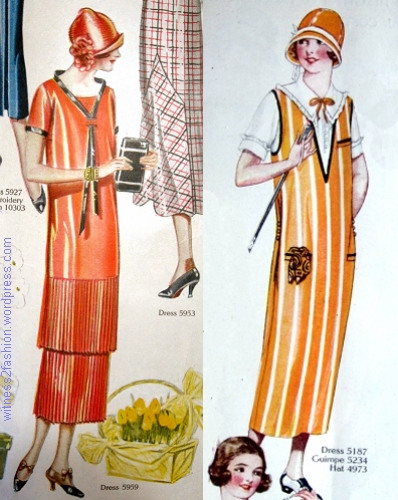 The dress on the left looks more coral (or cadmium red) than orange, but the sporty dress on the right is unquestionably orange and black. (There’s also a glimpse of an orange, black & white plaid dress behind the woman at left.) The orange striped dress is from a June issue, and orange and white is still a summer combination. But we’re more used to seeing orange combined with other bright colors, like yellow or lime or watermelon pink — not alone with black.

These girls are wearing back-to-school clothes, so it is autumn; the little girl is dressed in orange and white plaid, with black trim:

Back to school clothes, 1925. Delineator.

[Digression: The Chanel-influenced outfit on the left is knee-length on a schoolgirl in 1925; adult women would be wearing this length within two years.]

This is another illustration by McClelland Barclay for Holeproof Hosiery.

The caption read “First — Artistry in Silk, then the vividness of Paris Colors.” Her satin bodice may be navy, rather than black, but the combination — not to mention her orange silk stockings — is not one we’re used to seeing today, except around October 31.  A little less jarring – because the orange is not combined with black — is this suggestion for an October wedding, from 1924: 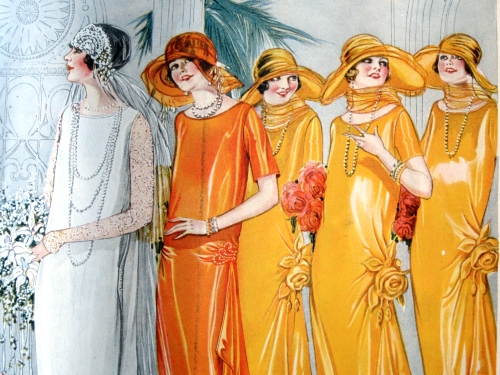 I notice that most of the wedding party are rosy-cheeked brunettes. Presumably the bride chose colors she was used to wearing. [ P.S. This is one of those illustrations that always made me ask, “How is it possible for women that young to have busts that low?” See Underpinning the Twenties:  Brassieres, Bandeaux, and Bust Flatteners for the answer.]