How did fashion get from here … 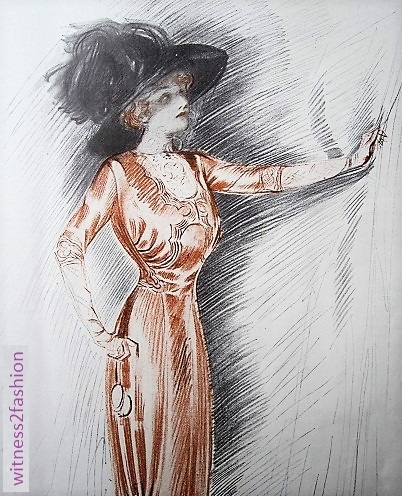 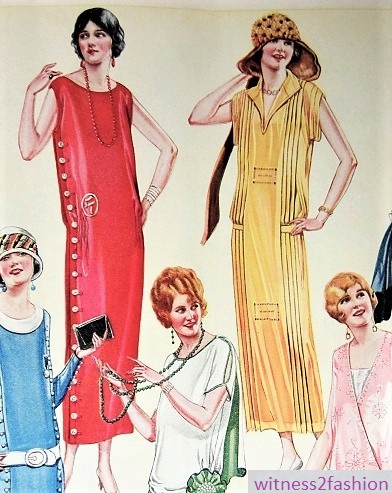 This is not a definitive answer — just a large collection of intriguing and sometimes contradictory tidbits I collected last month. 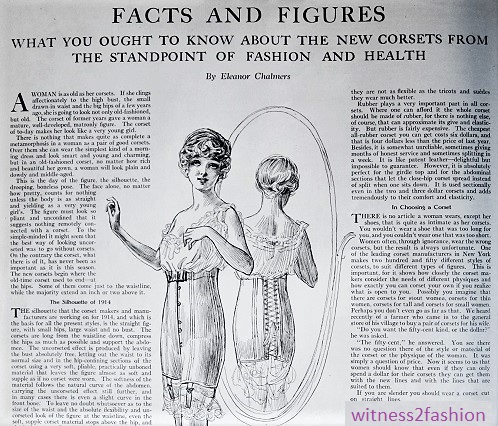 “Facts and Figures;” about the new corsets, from Delineator, April 1914. The author is Eleanor Chalmers. Page 38.

I was reading this article on corsets (1914) when I saw a sentence that leapt out:

That’s what it says: “Among smart women the size of the waistline has increased three inches in the past two or three years.” 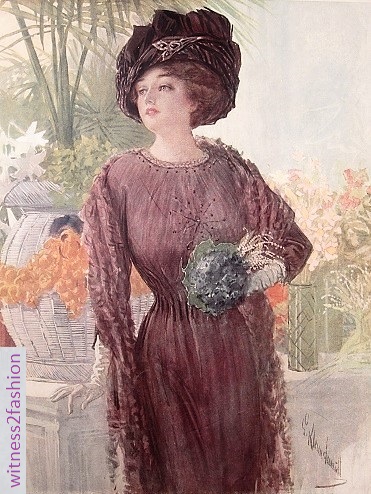 Full  breasts, narrow waist, wide hips: a classic hourglass figure. This is a voluptuous, grown woman in the prime of life. 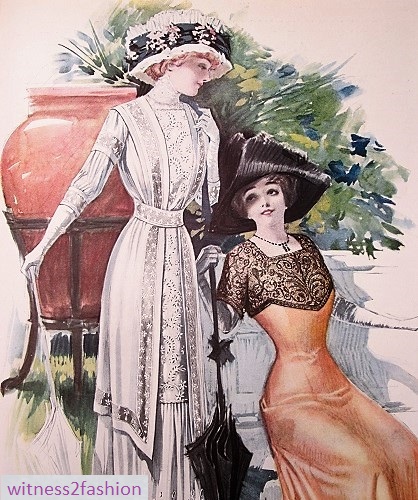 The 1910 beauty ideal is a mature woman, not a teen-aged girl. Of course, not all women looked this way without help. 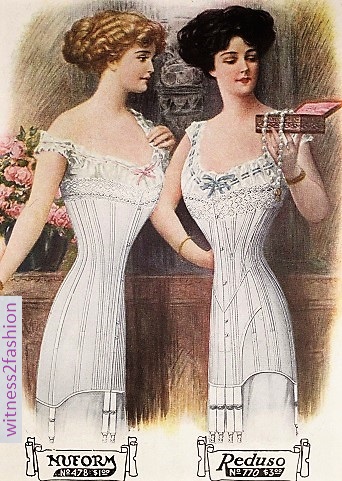 Even slender women were expected to be curvy: 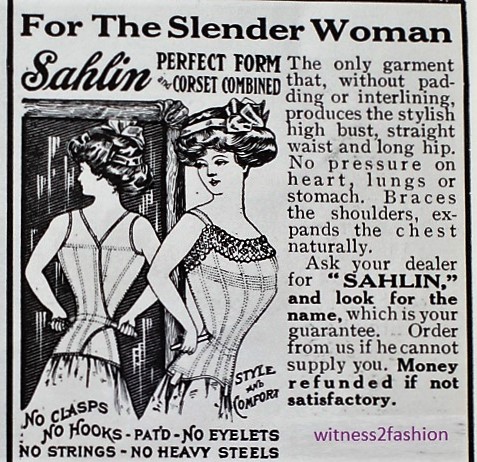 The Sahlin Perfect Form and Corset Combined was lightly structured, but promised the small-waisted, big-busted look of 1910.

“For the Slender Woman… The only garment that, without padding or interlining, produces the stylish high bust, straight waist, and long hip…. Braces the shoulders, expands the chest naturally.”

If pulling your shoulders back didn’t do the trick, you could resort to a different sort of help: 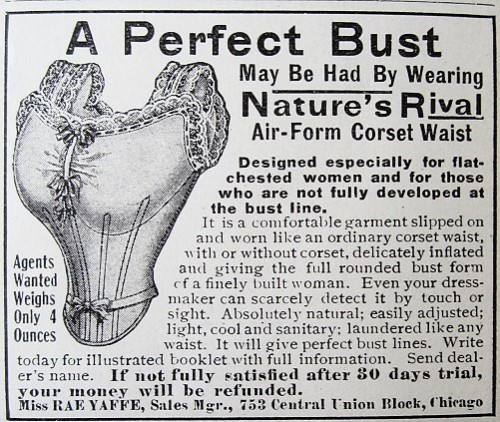 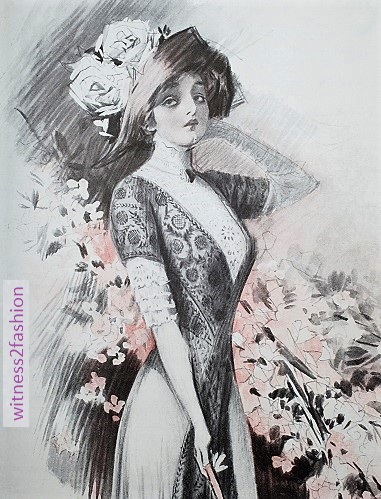 A slender but curvy woman (with an ideal figure for 1910) models a lingerie frock. Fashion illustration, Delineator, April 1910. 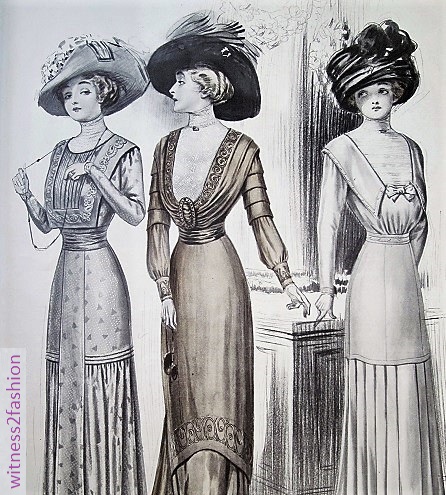 Shapely — but not necessarily girlish — women, March 1910; Delineator. Even the older woman has a tiny waist. 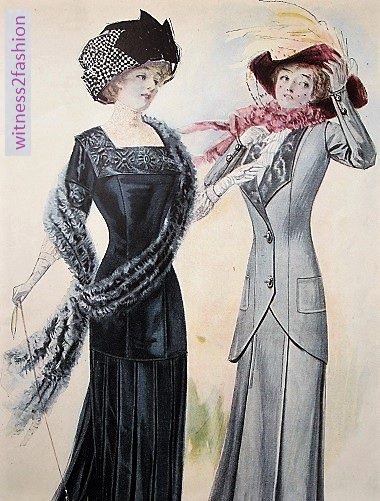 The woman at left is curvy; the woman in the suit at right has the hips of a corset ad. 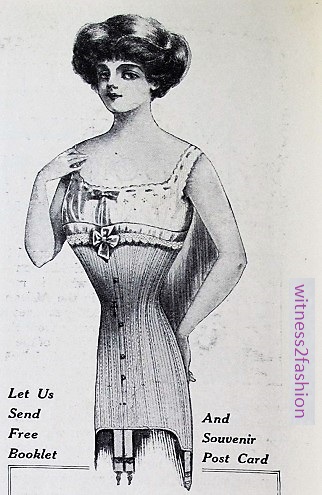 The corset Chalmers recommended in 1914 created a very different shape: it doesn’t support the bust at all; it has — preferably — a stretchy rubberized waist, and its stated goal is to make the hips look narrower while making the waist look larger. (“Unless your waist is large, your hips will not be small….”) 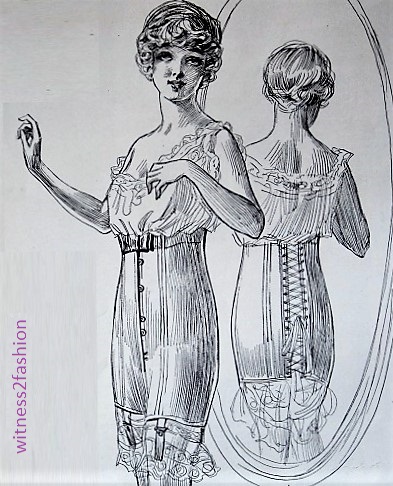 Front and back views of a recommended corset, April 1914. 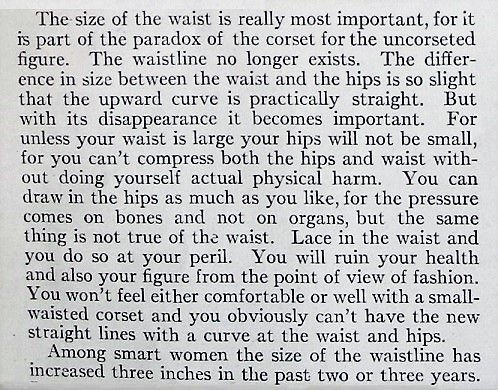 “The waistline no longer exists… You obviously can’t have the new straight lines with a curve at the waist and hips.” I was surprised to read this in an article from 1914. It seems to prefigure (no pun intended) the fashion ideal of the nineteen twenties. 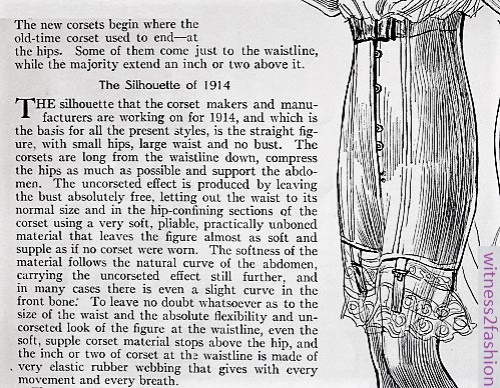 “The silhouette that the corset makers and manufacturers are working on for 1914, and which is the basis for all the present styles, is the straight figure, with small hips, large waist, and no bust. ” [This is 1914, but it could be 1920-something!] 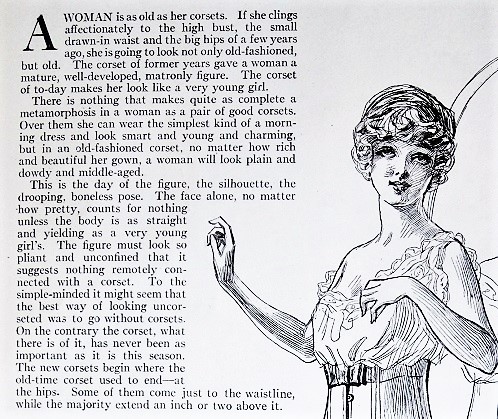 First paragraph of Eleanor Chalmer’s corset advice.”The face alone, no matter how pretty, counts for nothing unless the body is as straight and yielding as a very young girl.” Delineator, April 1914.

“If a woman clings affectionately to the high bust, the small drawn-in waist and the big hips of a few years ago, she is going to look not only old-fashioned, but old. The corset of former years gave a woman a mature, well-developed, matronly figure. The corset of to-day makes her look like a very young girl.” 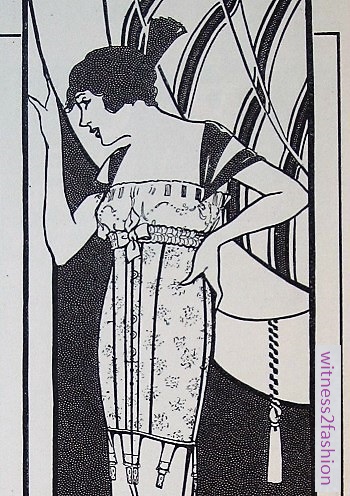 American Lady Corset ad from April 1914. It seems to meet the large waist requirement, but young? 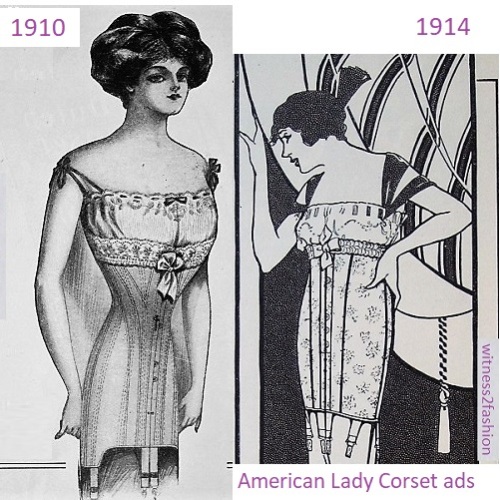 Compare two corsets from the same manufacturer, 1910 and 1914. Ads from Delineator. 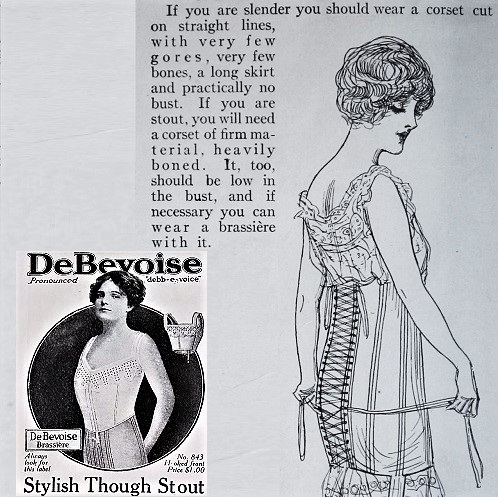 “If necessary, you can wear a brassiere with it.”

Since the ideal was now a small, low bust, this brassiere for a full-breasted woman confined her breasts rather than supporting them. 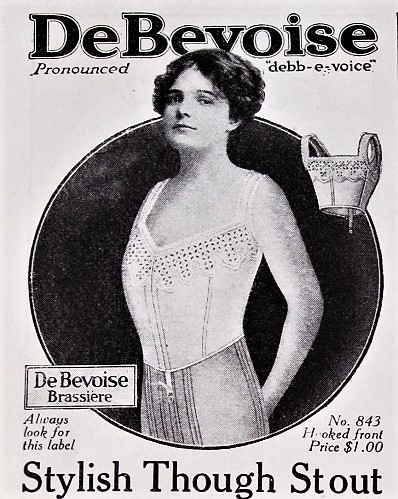 Of course, what fashion writers tell readers they are looking at, and what we actually see, are not always the same thing. 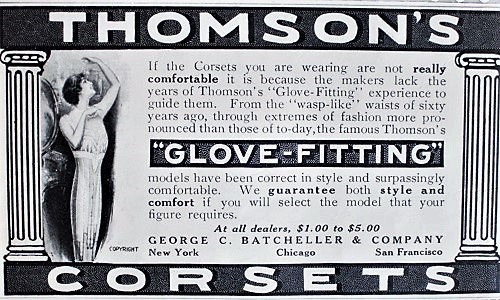 Ms. Chalmers and the corset makers are selling the idea of a slender, girlish hip. But for other fashion writers in the same year, this was the headline : 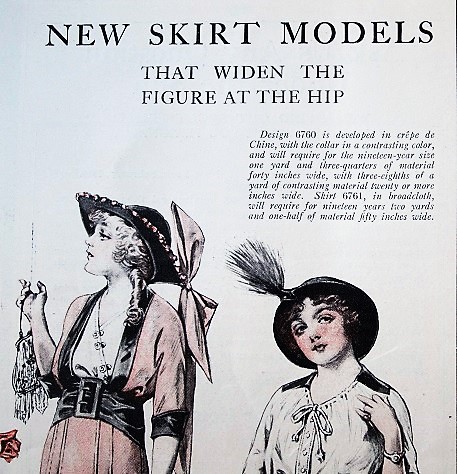 “New Skirt Models That Widen the Figure at the Hip.” Delineator, March 1914. 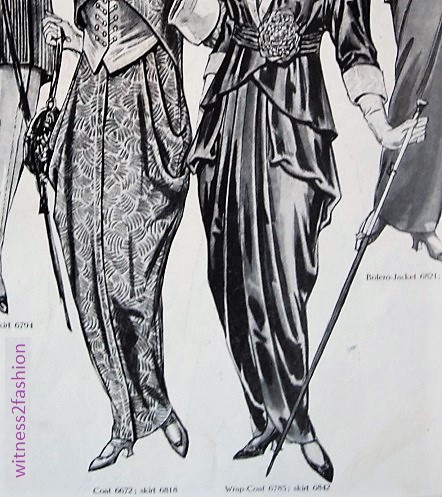 These skirt patterns were shown in the same issue as the corset advice article which emphasized the importance of slender hips. Delineator, April 1914, p 26.

It hardly seems worth the trouble of wearing a corset under those skirts. “Saddlebag thighs?” Very chic!

However, the waist was definitely getting thicker — and higher. Hard to believe, but the following six outfits are all for girls 14 to 19 years old. 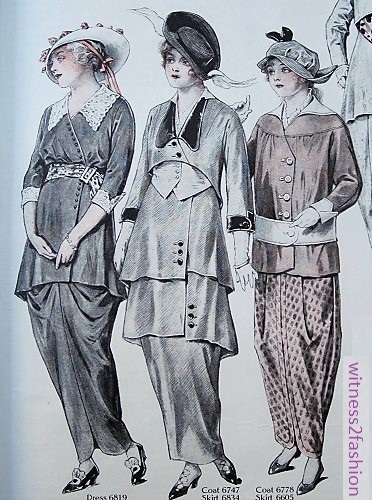 The 1914 ideal of a slender, girlish figure does not look as we might expect. 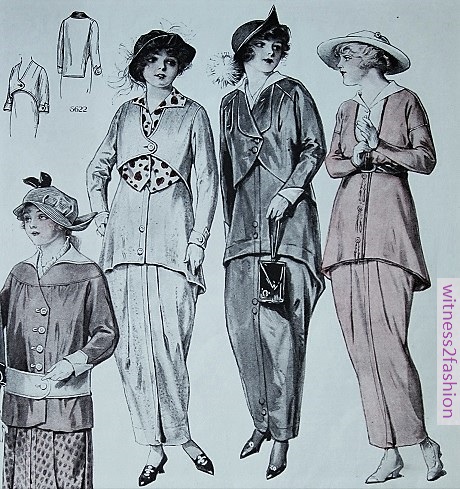 More patterns for teens 14 to 19 years old. April 1914. Tiny waists are out of style. Wide hips seem to be in… regardless of that corset article in the same magazine.

Even though I’ve written about the Tubular Twenties, I was looking for the arrival of the dropped waist; I missed the arrival of the thick waist. Maybe I should have been asking, “When did the waist disappear?” It looks like the answer is earlier than I realized. In 1914, the new style was usually high-waisted, but look at the girl at far left, above. Her waist is almost Twenties….

Skirts began to rise during World War I, but the wide hips and thick waists of the pre-war era continued into 1920: 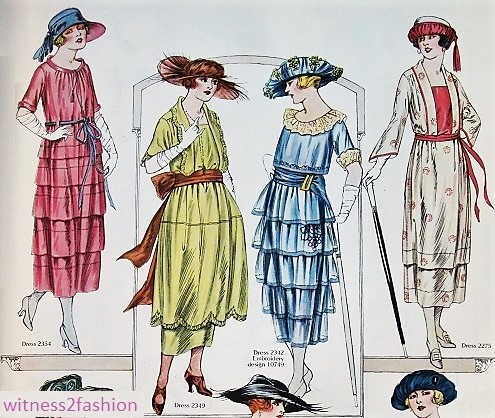 Butterick fashions for May, 1920. Delineator, p. 151. The wide, loose sash actually adds bulk to the waist.

Maybe the thickening waist is how we got from this … 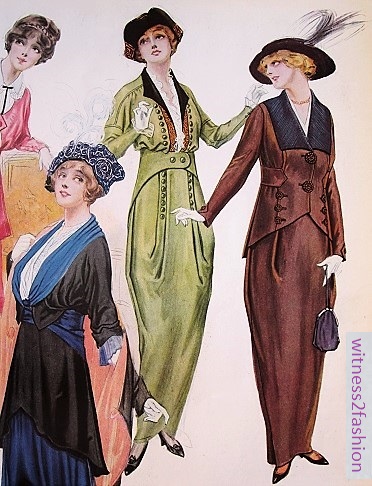 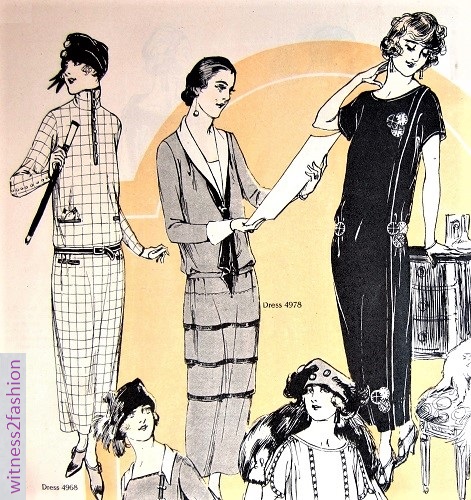 Butterick patterns for January 1924. The line is long and narrow; there is no hint that women have waists.

In 1925, another Delineator writer suggested that women had let their figures go during these years of bulky fashions. “A Few Years Ago Women Took Off Corsets . . . and Let Their Figures Go.” — Evelyn Dodge, Delineator, July 1925.