These three hat and bag patterns were so popular that they appeared in McCall Needlework catalogs  for several years. 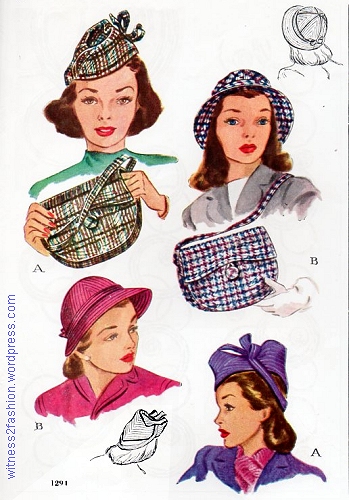 McCall hat and bag pattern 1294, from the December 1946 Needlework catalog. This pattern was still being sold in November, 1950.

According to the Commercial Pattern Archive, McCall 1294 was issued in 1946.

“Hand-made hats, bag, with the “custom” look. Rows of machine stitching give these hats style and body. Stitched bag has hand strap or shoulder strap.” [One of the good things to come out of WW II was the popularity of hands-free, over-the-shoulder purses, suitable for busy women who carried their own packages and took public transportation.]

You can see the topstitching of McCall 1294 more clearly in this enlargement. Note the period back strap which holds the hat in place.

In the two 1950 Needlework catalogs I have, only the top two illustrations were used.  Hat styles were changing, along with hair styles, but the bags are classic shapes — a compact 7 1/2 inches high by 9 inches wide. 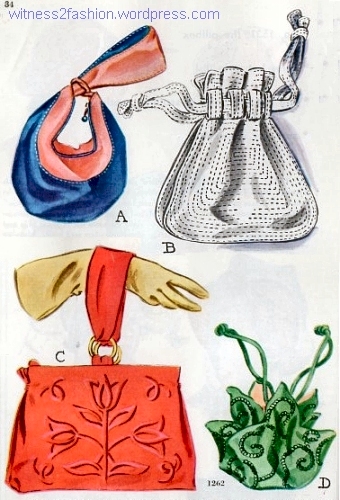 Views A and C close with a slide fastener, i.e., a zipper. Trapunto quilting, as on C, involves putting extra padding under the design, so that it is a raised pattern with stitching around it. Click here to see trapunto on a bed jacket. The sequinned bag at right is for evening. View C is “very dressy.”

These hats for girls also appeared for at least four years, starting in 1945.

McCall pattern 1204, girls’ hats, dates to 1945.  View C needs a back strap to stay perched on the head, just like some adult hats.

This enlarged image of No. 1204 is from the November, 1950 McCall needlework catalog, although the pattern was first released in 1945.

“Left-over pieces from Sister’s dress or coat can be used to make her a matching fabric hat.” “For school, for gadabout, for prettying up! Most casual of the three is the little brim hat (A) that fits the head closely.” It’s very similar to 1294 (B), the equally popular adult pattern, although the crowns are constructed differently.

Imagine: a world where little girls routinely wore hats — as did their fathers.

These girls’ hats are from Sears — 1945. Women who wanted to make hats at home from sewing patterns used cloth, because making a shaped felt hat usually requires equipment not available to the home stitcher.