I’m not claiming that short sleeves were never seen in 1920’s clothing, but the short set-in sleeve — mid-bicep length — was usually associated with house dresses and work uniforms in the Twenties. [EDIT 12/27/18:  I goofed! I was mislead by all the references to the “New” short sleeves in 1930. I’ve just noticed that many “alternate views” at the back of a 1926 Delineator show a short sleeve option on dresses that were illustrated with long sleeves in larger pictures…. So they were available if women wanted them.]

The woman on the left in this picture wears a work uniform with short, set-in sleeves.

Left. a servant or waitress uniform, June 1929. Ad from Delineator.

The short-sleeved work dress below probably has kimono sleeves — cut in one with the top of the dress and finished with bias tape, like the neckline. This was a fast, cheap way to make a dress by eliminating facings and separate sleeves. 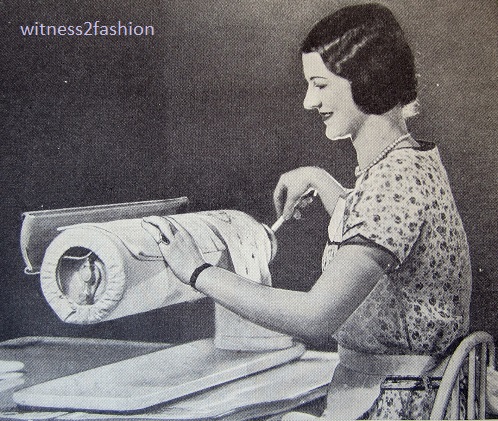 Short kimono sleeves — that is, sleeeves not cut separately from the dress bodice — were very common, and contributed to the ease of making the typical twenties’ dress.

The alternate views are interesting: even in its long-sleeved version, 2573 has kimono sleeves at the shoulder. 2541, on the other hand, has short, set-in sleeves.

2573 is for wear in the “country,” for sports like tennis [!], or “at home in the morning.” [The phrase “porch dress” was sometimes used instead of “house dress.” Either way, the dress stayed at home.]

Perhaps 2541 has set-in sleeves because it was available in very large sizes — up to 52 inch bust.

However, older and larger women were also offered these kimono sleeved dresses in early 1930: 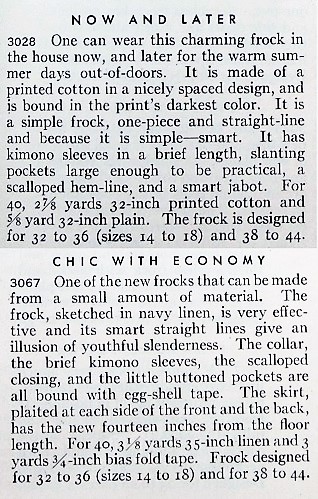 [Period detail: Both of those dresses have bias tape bindings or accents. The scallop button closing was very popular.]

Two typical dresses from the first half of 1929. Butterick 2648 (in sizes up to 48) has set-in sleeves. 2668 has kimono sleeves “for sun-browned arms”. Delineator, June 1929. These short dresses with low waistlines were on the verge of extinction in summer, 1929.

Close-fitting wrist-length sleeves, cut and sewn separately from the bodice, were usual for street clothes in the Twenties.
But I notice that the short sleeve, as we know it, was increasingly used on “dressy” dresses in 1929 and 1930.

The caption for this page was “Mature Grace.” The sheer dress on the left  (Butterick 3168) has the new, short sleeves — and it is suggested for older women in the normal size range. April, 1930. The name “one-quarter sleeve” is useful. 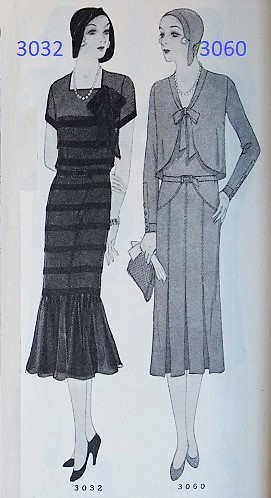 Two Butterick dresses from February 1930. I showed a detail of the one on the left at the top of this post — but I think it deserves a full-length view, too. [The Twenties are over.]

Many of the new, shorter sleeves were decorated with a non-functional tie or bow.

Butterick 3058 from February 1930 has short sleeves trimmed with decorative bows. 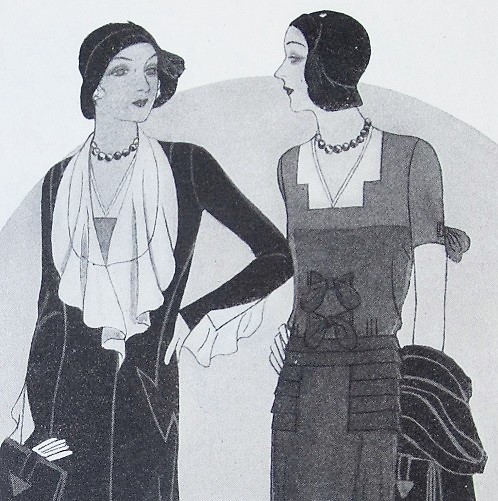 Right, another bow-trimmed short sleeve, from March 1930. This is definitely not a house dress. Butterick patterns from Delineator.

Left, a dress from Saks; right, Butterick blouse pattern 3282. Delineator, June 1930. Notice how long the dress is; both dress and blouse have natural waistlines. Bows on short sleeves were not just a Butterick pattern idea.

However, not all short sleeves from 1930 are set-in; the easier-to-sew kimono sleeve sometimes got longer:

All four of these dresses from June 1930 have the new short sleeve look, but, incredibly, they all have kimono sleeves — described as the key to an “easy to make” dress.

(Sewing tip: In my experience, a close-fitting, longish kimono sleeve is very likely to tear under the arm unless you add a gusset; if you don’t, it’s a good idea to use a stretchable stitch — like a narrow zig-zag — on the curved part of the underarm seam. Fabric cut in a curve will stretch — but only if the seam can stretch, too. An oval gusset is safer.)

All these 1930 dresses have set-in sleeves:

Bows on the sleeves were not obligatory. 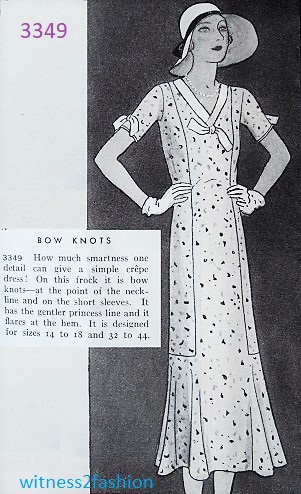 All Butterick patterns pictured are from Delineator magazines.