Sized to Height Patterns from Butterick, 1948

I happen to have a group of Butterick Fashion News Flyers from 1948. For several months, “Sized to Height” patterns, or “Special Patterns,” were featured as an innovation which still needed some explanation. The February issue explained the concept several times.

Front cover of Butterick Fashion News, Feb. 1948. The suit on the left, No. 4422, was available in both short and standard pattern sizes.

I don’t have a complete, consecutive run — just February, March, July and August of 1948 — but this “Special Patterns” or “Sized to Height” box appears on all four covers. (What I Found has a copy from 1947; that cover also mentions “shorter length” patterns.) 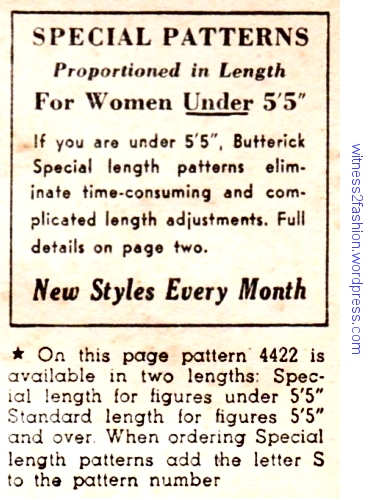 Further explanation and examples appeared on facing pages 2 and 3.

If the pattern was available in both standard and shorter sizes, customers could order the shorter one by putting an “S” after the pattern number.

Here is the explanatory text from the top of page 2:

Text from top of page 2, BFN Feb. 1948. “Special length … patterns are one inch shorter from neckline to waistline.”

Special Length patterns were shortened from the waist up, and were not aimed at stout or older women. (If the skirts were also proportionally shortened, Butterick didn’t mention it here.) Some of these patterns were illustrated twice in the same issue, once with the number followed by “S” and once as standard sized patterns. Starred numbers were available in both versions.

Butterick 4424 pattern for a suit with fitted jacket, available in standard  or short versions. Feb. 1948.

More “New Look” influence. Both pink dresses are pattern 4419, in standard and shorter sizes. (The model looks long-waisted in both illustrations.) Center, Butterick 4431; perhaps its complex bodice design made it unsuitable for a shorter version.

Dresses for mature or large women, available to size 46. (The gray one was available up to size 50.) Shorter versions of these patterns were apparently not available. Feb. 1948.

It’s a mystery to me why a pattern company like Butterick did not always capitalize on the fact that many women — especially mature women — are both short and “stout.” You would think that women who are not standard sizes would be a perfect niche market for specially sized sewing patterns, but that isn’t the case here.  (Lynn at American Age Fashion has written about the development of “half-size” dresses and patterns several times.)

Butterick did sell such patterns earlier.  In the nineteen thirties,  Butterick had issued some patterns for “shorter women with larger hips.” In her History of the Paper Pattern Industry, Joy Spanabel Emery shows Companion-Butterick pattern No. 7586, from 1937; it is a “Frock for Shorter Women of Larger Hip.” See it at the Commercial Pattern Archive by clicking here. Another from BFN in 1937 was Butterick 7647, the gray dress shown below: 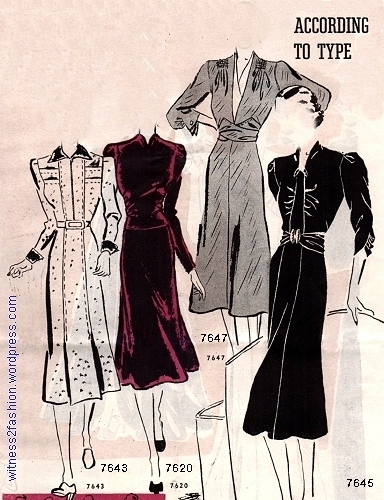 Another pattern for Shorter Women of Larger Hip (No. 8014) was shown in the BFN for August 1938. I don’t have a complete run of Butterick Fashion News, but the idea of patterns for shorter women with larger hips appeared at least as early as February, 1933 (Butterick 4883.) See “Clothes for Clubwomen.”

I haven’t found that phrase in my 1948 flyers, however.

Some of the 1948 dresses on page 7 came in either standard or “special” versions; the text at the bottom of the page taught  customers how to order:

Page 7, Butterick Fashion News, Feb. 1948. A Star next to the number meant that the pattern could be ordered in short or standard versions.

Perhaps the “S” stood for “Special,” but I suspect that customers thought it meant “Short.”

In July, 1948, Butterick used the word “Petite” to describe these patterns. The expression may well have appeared earlier, but it’s the first time I’ve noticed it applied to Butterick patterns — so far. It’s definitely an improvement over “Special.” Too bad they didn’t think of it in time to indicate these patterns with a “P” instead of an “S.”

Incidentally, it seems incredible to me that for decades Butterick assumed its average customer was 5′ 5″ or over, even in the nineteen twenties, when some of the most glamorous women in Hollywood were tiny:  Gloria Swanson was 5′ 1″. Clara Bow was 5′ 3 1/2″. “Little Mary” Pickford was just over five feet. Louise Brooks? 5′ 2″. Pola Negri? Five feet exactly. Greta Garbo was considered tall — and criticized for her wide hips and big feet — at five foot seven and a half. In the 1920’s Butterick patterns for “small women” were literally small — maximum bust about 37″ — when the normal pattern run fit sizes up to 44″ bust, with some patterns available up to size 52.

There is a great essay (with charts) about pattern sizing here; a chart from a very flawed government study shows that the average American woman was 5′ 3″ in 1937.

After World War II, more statistics were available and led to more specialized pattern sizing. The excellent Midvale Cottage blog (which I just discovered) says that Butterick introduced half sizes (for women under 5′ 5″ who were shorter-waisted and larger in the waist and hip) in 1949. Click here for her history of 1940’s pattern sizing.

I’ll share  more fashions from 1948 in later posts. [As often happens, when I started this post, I didn’t remember Butterick’s Shorter/Larger patterns from the 1930’s — even though I had mentioned them in other posts. As a result of proofreading and checking facts, this post kept getting longer…. Caution:  my sample of Butterick flyers is hardly conclusive for real scholarship — Just full of interesting things to share.]