Zippers Are Good for Your Children: Ad Campaigns from the 1920s and 1930s 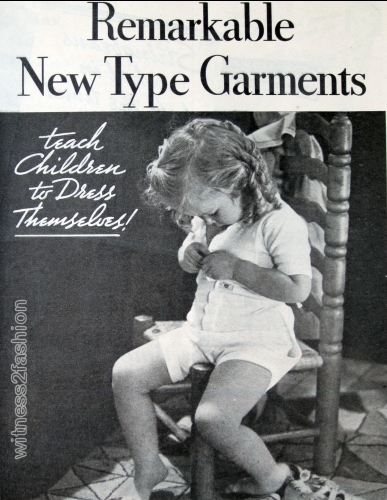 “Your Child’s First Lesson in Self-Reliance is Self-Dressing”

“Quick Dressing at Camp or Home Is No Longer a Problem.” Talon Zipper Ad, May 1929, Delineator

In Zipper: An Exploration in Novelty, Robert Friedel attributes the wide-spread adoption of zippers in children’s clothing in the late twenties and early thirties to the relatively new field of child psychology.  Child psychologists and scientific child-rearing experts began to stress the importance of developing self-reliance and self-confidence at an early age, beginning with children dressing themselves.

Why Children Couldn’t Dress Themselves

Traditional clothing for children in the 1920s made it impossible for a young child, especially a boy, to dress himself. Girls were also afflicted with clothes that buttoned up the back, but little boys needed help several times a day. 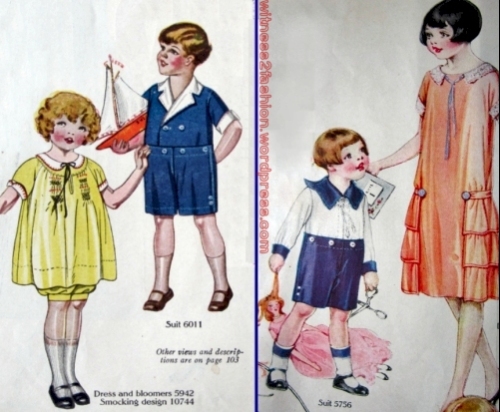 In the 1800s, young boys as well as girls wore skirts until they were well out of diapers.

But in the 1910s and 20s, boys’ pants buttoned to their shirts, in front and back, where buttons were hard to reach. This eliminated the need for suspenders to hold the pants up, but it must have been impossible for most 4 or 5 year old boys to go to the bathroom — and re-dress — without help.

Educator Ellen Miller, of the innovative Merrill-Palmer school, wrote that clothing for small boys had “an average of more than seventeen buttons” to be fastened, and some of these buttons were unreachable by small arms and hands. [Cited in Zipper, p. 179.] There could be even more buttons:

In the winter, boys and girls wore tight over-the-knee leggings fastened with buttons – lots of small buttons, which little fingers couldn’t fasten by themselves. (I count 11 buttons just on the part of the girl’s left legging that we can see.) 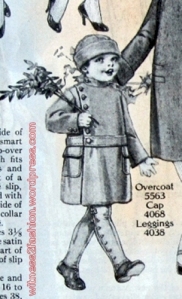 Winter months must have been a nightmare for kindergarten teachers.

As sales of zippers to B.F. Goodrich for ’Zippers’ brand boots for women tapered off around 1928,  the Hookless Fastener Company [which later became Talon] decided to develop a new market, and contacted the manufacturers of leggings: “When the New York fabric and corduroy manufacturers Hallett and Hackmeyer were persuaded to enter the market themselves, armed with the Talon fastener to make their offerings distinctive, the market turned around with astonishing speed.” By 1931, salesmen trying to set up a window display that would contrast a new zipper legging with an old-fashioned button legging reported that it was impossible to find a button legging for sale anywhere. [Zipper, p. 176]

I wish I could find an advertisement that says “4 out of 5 psychologists recommend zippers,” but I haven’t, yet. This 1936 ad for Vanta Baby Garments comes close to saying that children who don’t dress themselves will be psychologically damaged [Vanta did not necessarily use zippers] :

“If you keep on dressing your child when he should be learning to dress himself, you may be forming a habit of dependence upon others that he will never quite overcome. So say leading child psychologists and educators….

“Vanta Self-Help garments are designed to teach children to dress themselves when only two years old. They make a happy game of dressing – a game that the child looks forward to each day. But an important game that teaches him to think for himself, act for himself, do for himself. A self-reliant, resourceful, independent character in the making. ”

Vanta advertised that its buttonholes were large enough for little fingers; all clothes buttoned in the front, never in back; and the red, heart-shaped Vanta label was always on the front and on the outside, so children could tell when their clothes were right-side out. “This famous label is your child’s first guiding mark to independence . . . your own key to precious hours saved for recreation!”

This 1929 advertisement for Talon Slide-Fasteners also cites psychologists:  “Quick Dressing at camp or home is no longer a problem…. Whether for play or work, all the very young men are dressing themselves these days – and, thanks to Talon Slide-Fasteners, getting pleasure out of it. The reason they enjoy it, psychologists will tell you, is because Talon-fastened garments bring the ‘play-spirit’ into operation. Young minds quickly grasp any plan that affects their daily lives, in which the element of fun is involved…. Even a 4-year-old can quickly and easily work the slider-pull of a Talon Slide-Fastener….You can buy children’s Talon-Fastened garments for all occasions, or you can make them at home, using Talon Slide-Fasteners which you can buy at any Notion Counter.”

“Think what a help to busy housewives these features provide….”

Manufactured Items Made with Talon Zippers, Bottom of 1929 Ad

The bottom of the ad pictures a “Girl’s Play Suit; Child’s Sweater; Ladies’ Hand Bag; Duffle Bag; fitted with Talon Slide-Fasteners.” The smallest Talon zipper available in 1929 was still too large for very small children’s clothing, but by 1933 the #3 Talon zipper was becoming widely used. In the early 1930s a Hookless Fastener employee named Jack Keilly took his four-year-old daughter to stores to demonstrate how easily a child could use a zipper.  She was very impressive — but too young to work! — so eventually a movie was made, and department stores spent as much as $100 a week to show it to their customers. By 1936-37, when zippers began appearing in women’s dresses, they already knew how a zipper worked — so simple, a child could do it!