“If your hair grows so that a point can be made in the center of the back, have your barber cut it in a point.” — Celia Caroline Cole, in her article “Slicker ‘n’ Slicker,”  Delineator magazine, January 1924.

I exerpted the first part of “Slicker ‘n’ Slicker” in Part 1 of this post. (Click here to read it.) (And thank you to Dinah and Cristina , et al, for their really informative comments!) If you watch Downton Abbey, you have probably seen the episode where Lady Mary gets her hair cut into a sleek bob with a point in the back. [After looking at many images from 1924 through 1925, I realized that the thick point above her nape was not what was bothering me; it was the length of her hair in front.]

Louise Brooks probably had the most iconic sleek bobbed hair in the movies (click here), but she didn’t have the pointed back shown in the illustration above, which, as Celia Cole says, was only possible for about one in fifty women. The really “slicker ‘n’ slicker” hair that “looks like paint” probably belonged to elegant Josephine Baker, the American girl who became a legendary star in France. (Click here.) She even marketed a hair preparation called “Bakerfix.” 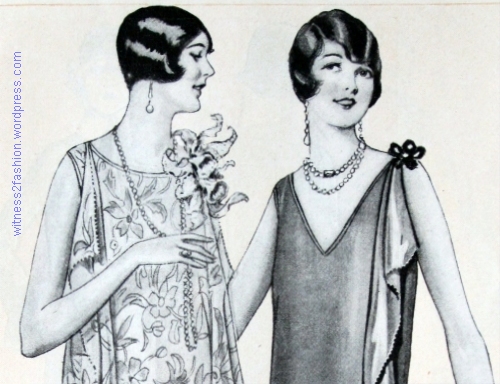 “The friendliest shingle is to have it cut long on the sides so as to cover the ears. . . . A lovely little sloping curve from behind the ear down to the sharp little point.” Two pattern illustration models from May, 1925. Butterick’s Delineator magazine.

“And long or short, the hair must be very neat — no more tousled heads — brushed until it shines, and for most faces waved in large, loose undulations.”

A Gallery of Mid-Twenties Hair Styles from Delineator Illustrations 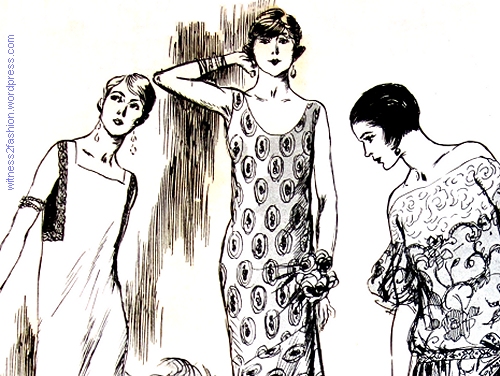 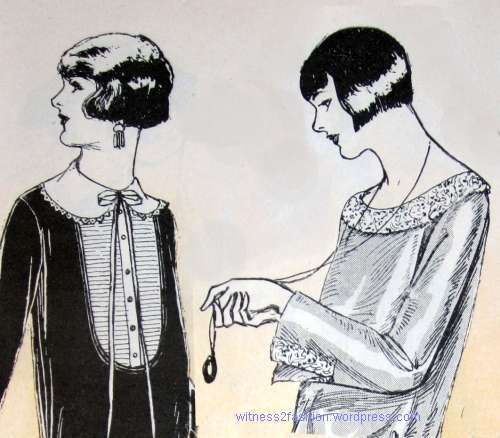 A few months later, in  January, 1925, the girl above left would have been among those who were advised to have the hair in back tapered or thinned “with a razor so that it does not stand out.” 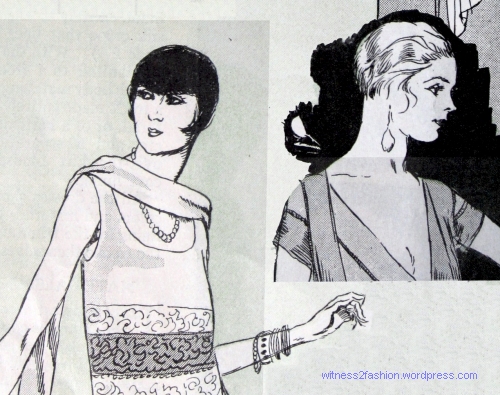 The blonde on the right has her hair cut almost like a man’s, long in front and tapered in back. She has tendrils falling on her cheek, like these other Paris models:

Very short hair on Paris models. The two on the left are from January 1925; the one on the right is from April, 1924.

A haircut like this gave you the option of pulling a lock from the front down to curl on your cheek on each side, or you could brush it straight back, like singer Dora Stroeva, pictured in Delineator, March, 1924.

The “Eton crop,” named after the prestigious English boys’ school Eton College, was the subject of cartoons like this one:

The woman on the right is admiring a photograph of the man the woman on the left is engaged to marry.  March, 1928, Punch magazine, reprinted in The Way to Wear’em by Christina Walkley.

The caption says, “Young woman (looking at a photograph of friend’s fiance).  ‘Well, God bless you, my dear, congratulations and all that. He certainly looks twice the man you are.’ ” (For more “fashion” cartoons from The Way to Wear’em and other books, click here.)

However, most women felt the need for some hair near the face to “save it from that utterly revealed look.”

1925, Delineator. The woman in the center has had her hair thinned a little at the bottom, as advised in “Slicker ‘n’ Slicker.” 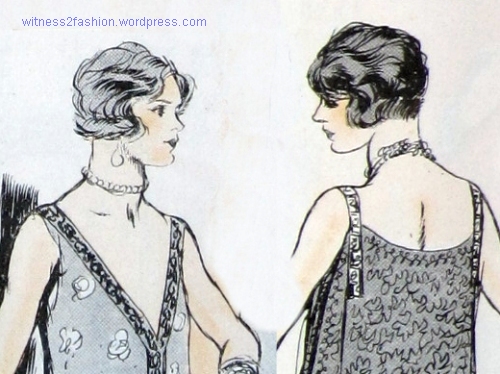 Having some hair around the face looked better with a hat.

Hair Styles That Are “Nice to Buy Hats For”

“Any one who has had short hair knows the joy of it — cool and free, easy to care for and nice to buy hats for.”

It’s hard now to remember that women once wore hats whenever they went out in public, but through the 1920’s and 1930’s photographs of crowds rarely show a person without a head covering of some kind. The tight-fitting, head-hugging hats of the 1920’s required hairstyles that could survive being compressed, and still look presentable when a woman took her hat off at work or at home. No wonder hairstyles got “slicker ‘n’  slicker.”

It didn’t matter whether the hat was a turban, or a cloche, or a hat with a brim; part of the twenties look is those little poufs or curls or “guiches” that fill in the hollow of the cheek. Without them, a cloche hides all your hair, and the look is austere and rather grim. As Celia Cole put it, ” The dressing of the hair means to the face and head what shrubbery and trees mean to a brand-new house: they save it from that utterly revealed look.”

Hats illustrated with dress patterns, February 1925. Delineator. Imagine how different they would look with no hair visible.

Even a tiny wisp of hair on the cheek softens the hat and sculpts the face.

Sleek, shiny hair cut to a point in back, February 1925. Delineator.

Which brings me back to Lady Mary’s haircut. Because the front was longer than any of the styles shown in these 1924-1925 illustrations, her haircut didn’t work very well with the hat of her riding habit.  Her hair didn’t fit neatly into the hollow of her cheek. It got messy. That bothered me, like getting a piece of popcorn stuck to a back tooth. 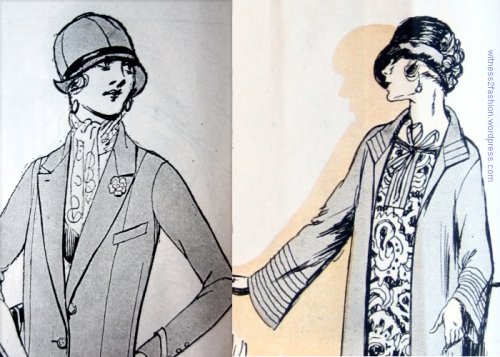 Two hats — with wisps of hair showing at the cheeks. February 1924, Delineator.

Of course, when it comes to dressing actors, the rule is , “The physical attractiveness of the actor to the audience outweighs all other considerations.” It doesn’t apply to all characters — and not to extras — but it does apply to leading actors playing physically attractive characters. Sometimes we search through incredible amounts of research, until we find one example that justifies the style that best becomes the actor. Molly Ivins said that there is nothing so dangerous as a man who has only read one book.”  I probably haven’t found the right book — and “I’m always hungry for more.”

Dinner Party from a Toothpaste Ad, Delineator magazine, January, 1924. These full hairdos were about to be replaced by “slicker” head-hugging styles.

I’m not a big fan of Downton Abbey, but I watch it anyway. In the last episode I saw, in season 5, Lady Mary got a new haircut, which is certainly something lots of women do when they feel the need for a change. But there was something about her bob that bothered me, so I poked around in my files, trying to figure out what it was.

Instead, I found a lengthy article about bobbed hair, “Slicker ‘n’ Slicker,” from January 1925, plus many hair-related images.  The article is long, so I’ll break the text up into readable sections (over two posts) and include period images of the styles it refers to. The author, Celia Caroline Cole, was a regular beauty columnist for Delineator magazine, and most of my images are from mid-twenties issues of Delineator.

Here is the illustration and caption that accompanied “Slicker ‘n’ Slicker”:

“ONE-FOURTH of the women of Paris are bobbed. And there is about that same proportion in London and New York.” —  Celia Caroline Cole, Delineator, January 1925.

Paris fashions from Lucien Lelong, left, and Jean Patou, center and right. The models have bobbed and shingled hair. Sketched by Soulie for Delineator, late 1925.

Women Whose Hair Was Not Yet Bobbed

What about the other seventy-five percent of women, the ones who had not yet succumbed to the fashion for very short, “slick” hair?

Bobbed hair had first been popularized during World War I; dancer and fashion icon Irene (Mrs. Vernon) Castle was influential in setting the style.

However, after the war ended, long hair became fashionable again. The Marcel Wave — and later, a permanent curl — made it possible for women born with straight hair to have very wavy locks. You could even get a  home permanent “outfit” (using one roller, which screwed into your lamp, like a lightbulb, since there was usually no other electrical supply in the room.) “A whole head can be waved comfortably in just a few hours.” 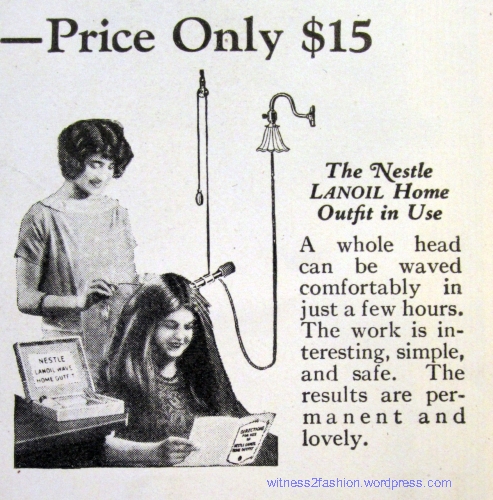 A Nestle Home Permanent Outfit, “Price only $15” in December, 1924. Delineator. It’s going to take more than a few hours to wave that head of hair.

My mother, like many other women, was still wearing her “marcelled” hair in the late 1920s:

A marcel wave, worn close to the head to fit under a cloche hat in the 1920’s. Most women did not wear a curl right in the middle of their foreheads, but her center part was very typical. “A part in the middle is as smart for bobs as for long hair.”

Three models from one page of Delineator magazine, November 1924:  the woman on the left has a marcel wave and long hair gathered into a chignon low on her neck. The woman on the right has a sleek bob with a “shingle” cut in back. Either style would fit under a cloche hat. 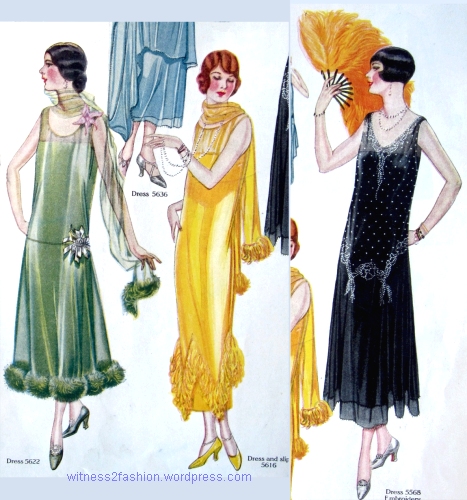 Return of the Bob

The fashion for bobbed hair returned in the early 1920’s. Daring young women went to the local (male) barber shop to have their “crowning glory” chopped off — sometimes to the horror of their parents. 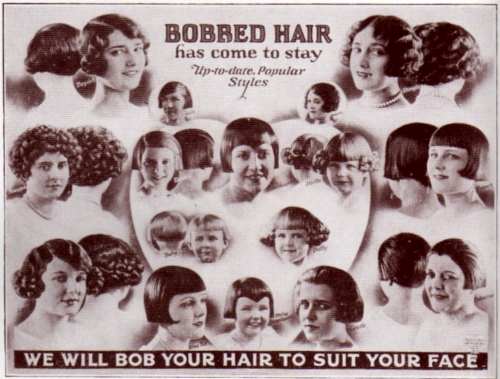 Barber’s Display card sold to barber shops in 1924. From An Illustrated History of Hairstyles, by Marian I. Doyle, page 82.

However, in January of 1925, most women had not yet bobbed their hair. Those who had, usually wore it very full (one might say, “bushy”);  the author of “Slicker ‘n’ Slicker” refers to their “large, gnomelike heads.”  Ads for shampoos and other hair products emphasized a thick, wavy head of hair: 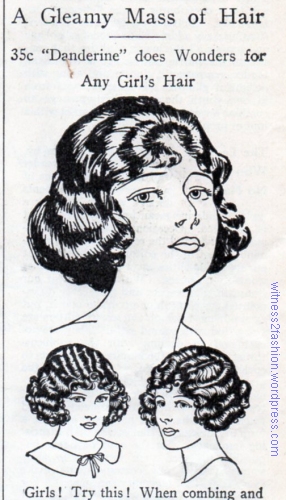 Even these styles, from the Barber Shop display card shown above,  are full, rather than sleek.

That is why the beauty editor of Delineator had to tell women, in January of 1925, that “the old straight bob is very demodee.” [Démodée means “out of style, unfashionable.”] “To be modee and exciting and to look like an illustration in a novel, the hair should be either shingled or dressed so close to the head that it looks like paint.” — C. C. Cole

“If a woman has a well-shaped head . . . , the hair is cut close to the head in the back and about a third of the way up from the nape of the neck and from there on it is longer. The whole aim is to have a beautiful line for the back of the head — that loveliness one finds in the head of a young boy.

“If the hair is thin . . . , the smart hairdresser does not cut the hair close at the nape of the neck, but cuts it in one length from the crown to the nape, thinning the ends with a razor so that it will not stand out.” — Celia Cole in her article “Slicker ‘n’ Slicker.”

“A dashing little head on the top of a slender supple body not at all concealed by its extremely simple frock.” Pattern illustrations from Delineator, Feb. 1924. 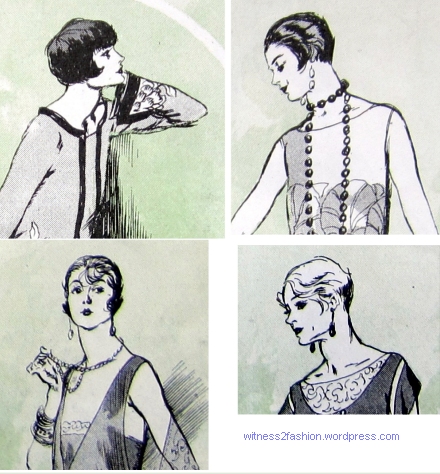 French Models sketched by Soulie, March 1924. Delineator. “The bob has no age limit.”

“Wave it” or “Dress it low” if a shingle doesn’t suit your hair or head shape; two styles from 1924. Delineator.

However, if a woman’s hair is thick, she should “go to a good barber — and by “barber” we mean a woman’s barber, a hairdresser — and have him thin it out evenly, so that it can be dressed smartly close.”