Dresses from the 1910s and 1920s were often ornamented with embroidery and beading, even for daytime wear. Just as there was a strong interest in ethnic clothing and crafts in the nineteen sixties and seventies, some women appreciated folk embroidery and embellishment ninety years ago. The style was not limited to “artistic” or eccentric dressers; “peasant” blouse and dress patterns were offered by mainstream companies. I was lucky enough to photograph the 1920s peasant dresses that follow while making an inventory of a friend’s collection. [I wish now that I had had time to take better pictures!]

Here are some Butterick “peasant” patterns from 1925:

May 1925: blouse trimmed with smocking and embroidery, from Butterick’s Delineator magazine. 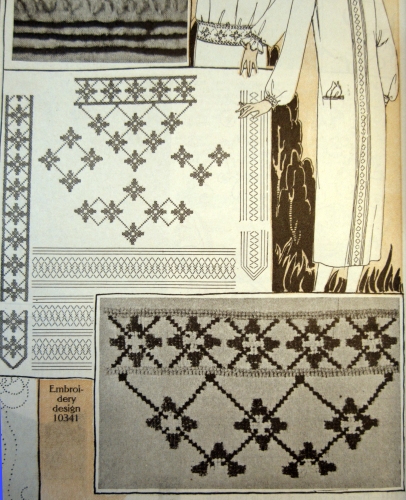 Embroidery transfer #10341 for the blouse shown above.

“#10341: You get several trimming combinations in this embroidery, for after you have finished trimming your peasant blouse with the cross-stitched bandings and motifs, you can use the one-stitch banding in bright wools down the front of your wool jersey sports frock…. The one-stitch banding may combine different bright colors in wools…. It can be adapted to 1 5/8 yard each of bandings 4 ½ inches wide, 2 ½ inches wide, 1 5/8 inch wide and 1 3/4 inch wide and 32 assorted motifs.”

Butterick blouse pattern #5903. On the right, it is shown embroidered in red — or red and black — and worn under a black “suspender skirt.” May, 1925.

These smocked peasant dresses from the same issue (May, 1925) have a strong relationship to the embroidered vintage dress pictured below. Smocking is a peasant embellishment technique originally used on shepherd’s smocks.

“#6006: One-piece dresses in peasant style are very cool and dainty for Summer and one of the smartest new fashions…. Many attractive color combinations are possible, for instance, on a white frock the smocking may be done in red, lavender, yellow and black.”

The subtler color palette of this vintage peasant dress, in sheer cotton, is very attractive: 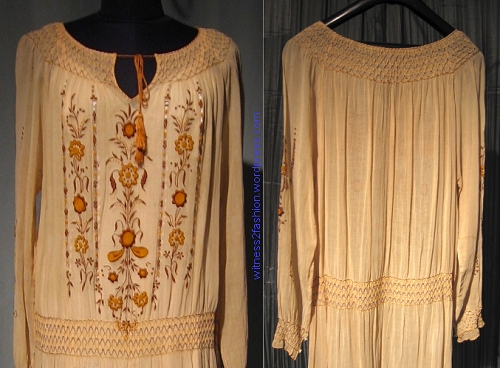 Detail of front and back

This white linen dress with marine blue embroidery and cutwork is more clearly inspired by ethnic embroidery. [I imagine it being worn by a 1920s tourist visiting the Greek islands with parasol in one hand and sketchbook in the other. I dimly remember a similar dress being used in the movie Carrington (1995), based on the life of painter Dora Carrington.]

Front and side views of a vintage white linen embroidered dress, 1920s.

PHOTO  This dress, which was in the collection of a friend, had blue crocheted loops and blue crocheted buttons along the collar and neck opening. I photographed it first over a pale peach slip, to show the beautiful openwork patterns:

And again over a navy blue slip, which gives it more dimension.

Considering the amazing things that can be done with computerized sewing machines and soluble stabilizers, I suppose it would be possible to duplicate these dresses today without the many, many hours of handwork that made the originals so wonderful. But it would still be quite a project!