Many people have written about this dress, which Gilbert Adrian designed for Joan Crawford to wear in the film Letty Lynton, in 1932. 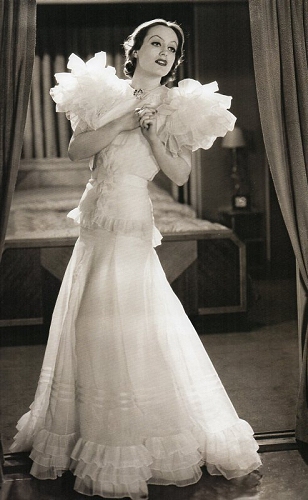 Joan Crawford in “the Letty Lynton dress” designed by Gilbert Adrian. 1932. Image from Creating the Illusion, by Jorgensen and Scoggins.

The “Letty Lynton dress” is usually mentioned as the first movie fashion to be widely copied and sold all over the U.S. — a sign to manufacturers and store buyers that Hollywood could be more influential than Paris when it came to women’s clothing.

“The first time I became conscious of the terrific power of the movies was some months after Letty Lynton was released. I came to New York and found that everyone was talking about the Letty Lynton dress. I had to go into the shops to discover that of all the clothes I had done for Crawford in that film, it was a white organdie dress with big puffed sleeves that made the success. In the studio we thought the dress was amusing but a trifle extreme. The copies of it made the original Letty Lynton look very modest and shy.” — Adrian, quoted in Creating the Illusion, p. 142.

I don’t have any Butterick pattern photos from 1933, but the influence of the Letty Lynton dress can be found in this 1933 advertisement for the Woman’s Institute dressmaking course:

Here are some Letty Lynton-inspired dresses from the Sears catalogs, 1933 and 1934.

Before Letty Lynton, the ideal 1930’s evening gown for young women was usually bare and slinky:

Evening gowns from Delineator, January and March, 1932. Butterick patterns 4271, 4262, and 4409. Notice how wide the models’ shoulders are drawn in relation to their hips!

In 1932, women’s dresses were clinging to their waists and breasts, in a way that had not been seen since before World War I. The horizontal hip line of the nineteen twenties had made even thin women look wider. In the thirties, bias-cut dresses clung to a natural, curvy body, sometimes improved by the new, soft girdles and bras made with lastex. But the average woman still couldn’t achieve the narrow-hipped ideal thirties’ figure.

Apparently, women who saw Letty Lynton (released in 1932) fell in love with the romantic look of Letty’s dress. And with the way it made her hips look smaller.

The dress on the left has extended shoulders, too. 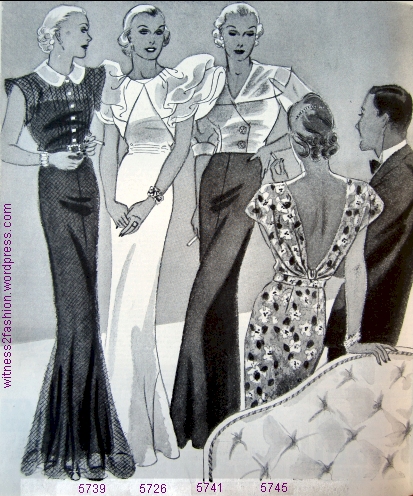 Butterick pattern 5516, from February 1934, has softer ruffles at the shoulders. 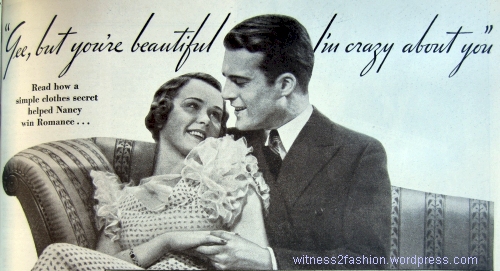 This Letty Lynton-look dress was worn in an ad for Lux Soap; Delineator, June 1934.

If you already had an evening gown, you could bring it up to date with this cape: 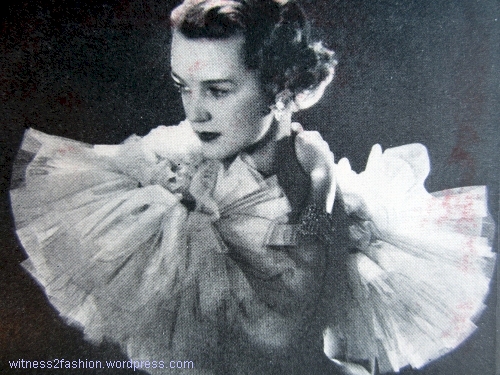 “Pink Maline: Frothy yards of it in a cape that’s chic frosting for a dark evening dress.” Delineator, May 1934 . Maline is netting, like tulle.

The (Pre-Code) plot of Letty Lynton stars Crawford as a woman who leaves the man she has been living with, falls in love, and wants to start a new life — or die. Her white organdy confection of a dress is girlishly innocent, compared to the slinky wardrobe she wears as a sexually uninhibited woman. The organdy dress is extreme, and extremely flattering.

Part 2:  Were the Letty Lynton dress, Joan Crawford’s shoulders, and Adrian’s designs responsible for women’s shoulder pads in the 1940s?