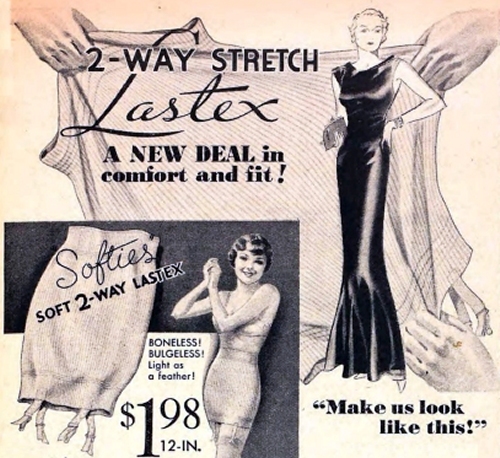 Many changes in fashion were taking place between 1929 and 1934, in addition to the fall of the hemline and the rise of the waistline.

For the first time in centuries, fashions followed the natural shape of a woman’s body. Bias-cut dresses, which clung to every curve, were already chic in 1929.

Makers of bosom-flattening brassieres — such as the “Flatter-U” and “Boyshform” bandeaux — were losing younger customers to companies like “Maiden Form” and G.M. Poix’s “A-P Uplift.” The word “uplift” was applied rather freely.

Farrell-Beck and Gau, authors of the book Uplift:  The Bra in America, point out that in previous centuries, corsets pushed the breasts up from below; now, brassieres with shoulder straps lifted the breasts up.

After the mono-bosom years earlier in the 20th century, the word “uplift” seems to include the idea of separation. Women were finally acknowledged to have two breasts, one on either side of the sternum.

The garment that had been called a “corset” (or “corselette,” if it was unboned) became a “foundation.”

This illustration of the latest foundation garments appeared in The Delineator as early as March, 1929.

“Out went the whalebone. In went elastic. . . . The ‘foundation garment’ or ‘costume foundation’ . . . has definitely supplanted the word ‘corset’ and earned universal approval.”  — Editorial in The Delineator, March 1929. 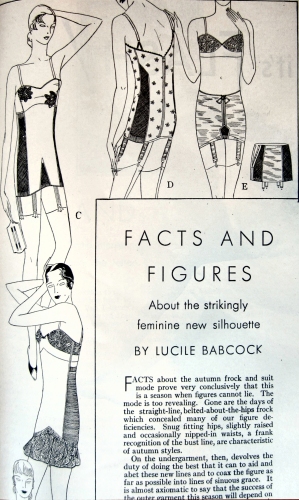 “Facts and Figures about the strikingly feminine new silhouette.” Article in The Delineator, October 1929.

“Gone are the days of the straight-line, belted-about-the-hips frock which concealed many of our figure deficiencies. Snug fitting hips, slightly raised and occasionally nipped-in waists, a frank recognition of the bust line, are characteristic of autumn styles.” — Lucile Babcock, in The Delineator, Oct. 1929.

The corset went through other changes after 1929.

Bias-cut satin dresses like these would have revealed every bump, boning channel, and lacing of an old-fashioned corset. 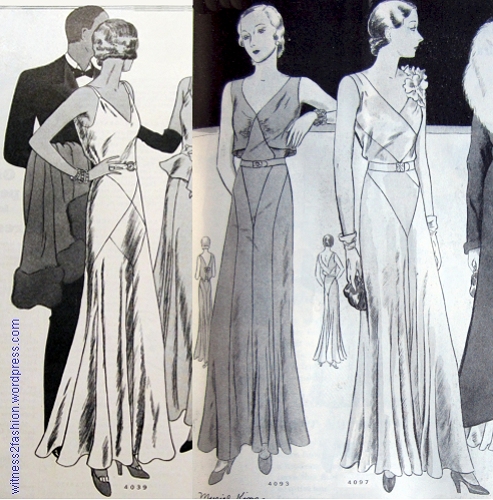 In 1929, the Sears catalog shows “boyish”/bust-suppressing corsets on the same page as corsets with soft, non-flattening tops. 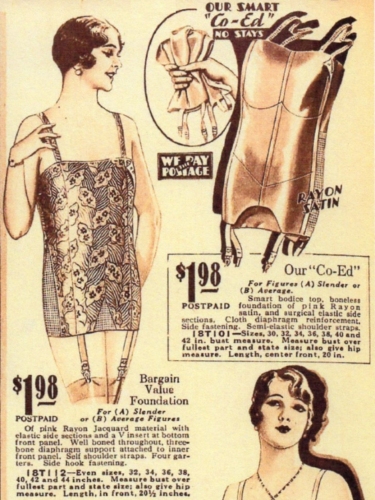 The foundation on the left is a typical 1920’s corset;  bust-flattening boned seams and no waist indentation turn the body into a tube shape.

Significantly, the 1929 corset on the left below has rayon jersey (knit) in the bust area. Although not truly cup shaped, the soft fabric was not designed to flatten the breasts,  unlike the boned garment on the right.

Several of Sears’ 1929 corsets/foundations use soft rayon jersey over the bust.

Foundation with “uplift style” rayon bust; Fall 1929 Sears catalog, p. 218. It’s hard to believe that this did much “lifting.”

But the chief problem of late 1920’s corsets (or foundations, as they were now being called)  was that their stretch panels had to be made from something like surgical elastic (similar to the Ace bandages used for sprained wrists and ankles.) At the time, elasticized fabrics were limited in size, so the fronts and backs of corsets had to be made of traditional, non-stretch corset materials, like coutil or thick satin; they needed hook-and-eye or  zipper closings, and the seams (and fastenings) were never smooth enough for wearing under thin, bias-cut gowns like this one:

The revolution came in the early 1930’s, when a new method for processing rubber was invented. According to Elizabeth Ewing’s Fashion in Underwear, before 1930 the sap of rubber trees (latex) was dried and compressed into bricks for shipping. When it reached England, the bricks were liquified, and long sheets of rubber were made. These sheets would then be cut into strips and incorporated into fabrics, but the strips were never long enough to be effectively woven into material suitable for the mass production of corsets.

Fall 1930 Sears catalog. Before the invention of Lastex, elastic panels had to be used sparingly or pieced together. (However, by 1930 the bust is definitely back in style.)

“About 1930,” a new chemical process allowed latex to be shipped in its liquid form. The liquid latex could then be extruded into fine threads — called Lastex —  which were as long as threads of traditional materials, which meant that elasticized yardage could finally be made in lengths and widths suitable for mass produced garments. As soon as weaving and knitting machines had been adapted to use Lastex, a new kind of undergarment became possible. 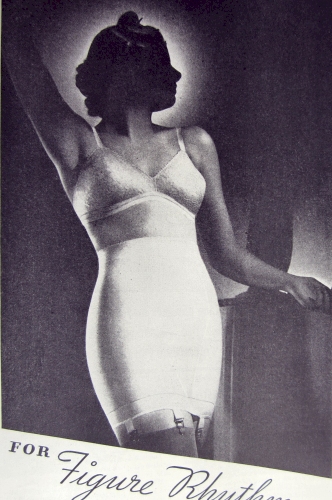 My question was, “How much time did it take for undergarments made with Lastex to become available — and affordable — to working class women?”

The answer: Hardly any time at all! The Sears, Roebuck catalog for Spring 1932 proudly introduces Lastex and “Clingtex” garments made of “new, cloth-like elastic (Lastex.)”

Early Lastex foundations combined the new stretch fabric with traditional corset materials —  for extra control over the abdomen, for example. 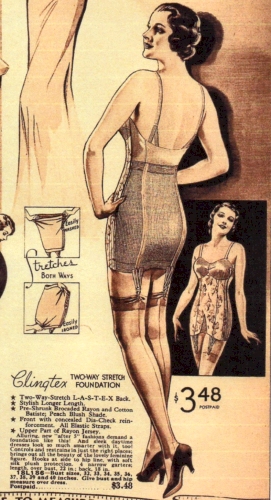 By Fall of 1933, however, Sears was offering “Two-Way Stretch Softies” made entirely of stretch fabric.  The “roll-on” girdle, which required no fastenings,  “dates from 1932 in England and probably a year earlier in the U.S.A.” [Ewing]

These “step-in” stretch foundations, which pull on, were made on a circular knitting machine; not only did they have no zippers , they had no seams.

A foundation garment that made a woman look firmer, smoother, and younger — which improved her natural figure without distortion — was perfect under the bias gowns of the 1930s. This 1933 “Softie” All-in One from Sears (on the left) )looks very much like the Spandex “smoothers” available in stores in 2015.

Literally for the first time in hundreds of years, the purpose of a corset was not to distort a woman’s body.

The purpose of the nineteen-thirties’ foundation garment was to create the impression of a perfect, nude body under the clothes. It firmed the hips, flattened the belly, and supported the breasts, but all in imitation of nature, giving its wearer the firm, flexible figure of a healthy young woman.

The End of the Boyish Figure

One more (less encouraging) thing about changes in fashion after 1929:

By Fall of 1932 women were already made to feel self-conscious about having small breasts.

That didn’t take long, did it?