You Cannot Afford to be Gray in the Day of Youth: 1920s Ads for Hair Coloring

The fashions of the nineteen twenties emphasized youth. A very slender figure, boyishly short hair, lots of ‘pep’: it was hard for women over forty to embody these ideals — unless they had a little help. 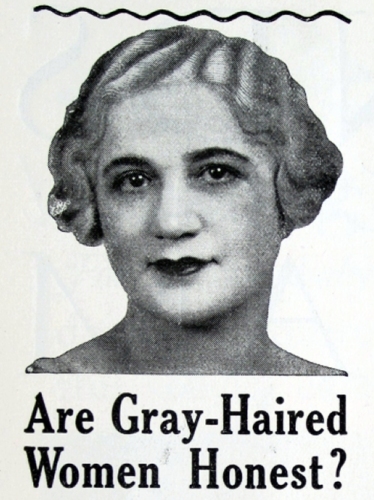 Most women born in the late 1800s — and approaching their forties by 1925 —  were raised to think that obvious cosmetics and beauty aids were signs of immorality, the mark of a “painted woman.” [Even in the 1880s, wealthy urban women, of unimpeachable social standing, could get away with wearing powder and rouge, and perhaps a touch of lip color, but the wife of a small-town doctor or businessman could not risk her reputation that way.] To some people, wearing make-up was a form of deceit. This ad — asking “Are Gray-Haired Women Honest?” — plays upon that attitude, and turns it on its head, so to speak. 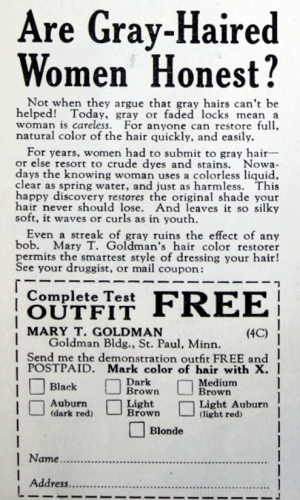 “Today, gray or faded locks mean a woman is careless. . . . Nowadays the knowing woman uses a colorless liquid, clear as spring water, and just as harmless. This happy discovery restores the original shade your hair should never lose.” [Notice, it’s not a dye, it merely “restores” your hair’s natural color.] “And leaves it so silky soft, it waves or curls as in youth. Even a streak of gray ruins the effect of any bob. . . .” 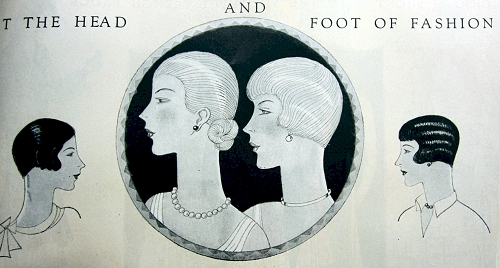 In the 1920s, attitudes toward visible cosmetics were changing. Young women now carried a compact containing powder and rouge in their purses (and were criticized for applying powder and lip rouge in public, at restaurant tables, for example.)  Lips were unnaturally bright or dark red — look at the lips on the gray-haired model above — and mascara and eye shadows were not subtle:

From an advertisement for Maybelline eye makeup, Delineator, May 1924.

With young women looking so seductive, older women had to keep up the appearance of youth to compete. Advertisers played on the fears of their audience in many ways.

Does One Gray Hair Frighten You? Use Notox. 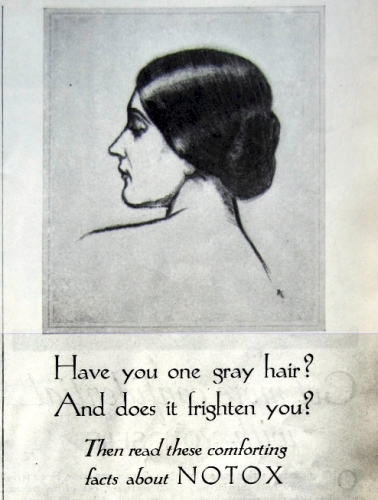 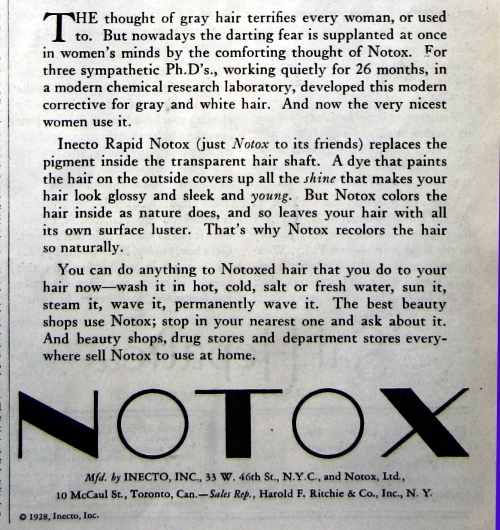 Ad for Notox “corrective for gray or white hair.” December, 1928.

“The very nicest women use it.”

Gray Hair Comes in the Night; Use Brownatone.

“She retires, a reigning beauty whose triumphs were the envy and despair of a hundred rivals. She awakes to tragedy! In the night relentless age had laid a silvering finger on her hair. Youth betrayed by Time!”

“Present Day hairdressing makes no allowance for Gray Hair. The shingle, the boyish bob, the masculine pompadour, the chic coiffure of closely bound hair, accents gray, faded, streaked or unevenly colored hair. You cannot afford gray hair because this is the Day of Youth.”

“As long as you feel youth in your heart, you have a right to retain it in your appearance! Gray hair need not be submitted to meekly. . . . [Wyeth’s Sage and Sulphur Compound] darkens the hair so beautifully and naturally that no one can possibly tell. . . . By morning the gray hair disappears; . . . its natural color is restored and it becomes thick, glossy and lustrous, and you appear years younger.”

These ads are all taken from one publication, Delineator, a woman’s magazine which was published by Butterick, the sewing pattern company. Many of the advertisers’ themes are still in use today; some modern hair products are “natural,” like Wyeth’s Sage Tea and Sulphur Compound; Mary T. Goldman’s product is a “clear” color “restorer,” like products aimed at men today. Notox — scientifically produced by three Ph. D’s — colors the inside of the hair shaft , so it leaves hair shiny and “glossy and young” — like the Healthy Look™ ‘creme gloss’ I use today. Other brands advertised included Brownatone, which promised — in March, 1925 — that “You can tint gray, faded or bleached hair any color from lightest blonde to the varying shades of brown or black. . .”

. . . even though it was only available in two colors, “Golden to Medium Brown” and “Dark Brown to Black.” Perhaps the product had been greatly improved since this ad appeared in February, 1924:

Brownatone Ad, February 1924. This ad says it “tints… hair to natural shades of brown or black.” (The model doesn’t look a day over thirty to me.)

Q-Ban Hair Color Restorer (say it out loud, and notice the lovely Senorita) promises only to restore dark hair. Note, it’s “not a dye.” 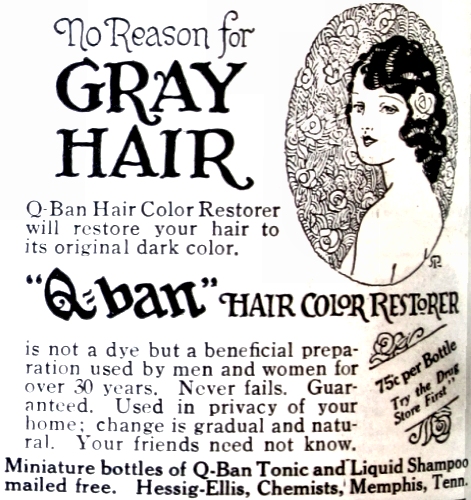 “A beneficial preparation used by men and women for over 30 years. Used in privacy of your own home…. Your friends need not know.”

In 1895, a character in The Importance of Being Earnest says, of the widowed Lady Harbury, “I hear her hair has turned quite gold with grief.” “It certainly has changed its colour,” replies Lady Bracknell, “from what cause I, of course, cannot say.”

If all these claims made a woman skeptical, she could get a free, “complete test outfit” from Mary T. Goldman, or a sample from Brownatone for just 10 cents.

On the Other Hand…

It’s hard to distinguish blonde hair from white in a black and white illustration, but I’d like to think this Paris couture model represents a mature client who refuses to dye:

A Paris design from Agnes, January 1925.

7 responses to “You Cannot Afford to be Gray in the Day of Youth: 1920s Ads for Hair Coloring”