It’s always hard to look at a vintage ad or catalog, see a pair of shoes for $6.50, and figure out whether they were expensive or affordable or really cheap at the time. A while ago, I found several articles about living on $18 per week in the 1930’s. Click here to read more about them. I’ll be citing some of the same charts here.

I’ve been looking through JoAnne Olian’s book on the B. Altman catalogs from the 1920’s. I was surprised by how high Altman’s clothing prices seemed, especially early in the decade. Then I remembered that I have some articles about clothing budgets in the 1920’s, which might give me a better idea of nineteen twenties’ clothing prices.

I decided to compare the nineteen twenties’ and thirties’ budget advice, and see if I could follow it by “shopping” at Sears.

I was struck by one similarity:  In both 1924 and 1936, a college educated office worker — female — could expect to be paid “$18 per week.” So she probably wouldn’t be shopping from the B. Altman catalog; nevertheless, trying to look nicely dressed for work was a real concern.

“…It is necessary that I at all times look well. My wages are figured at the rate of forty cents an hour, which usually averages up to eighteen dollars a week.” 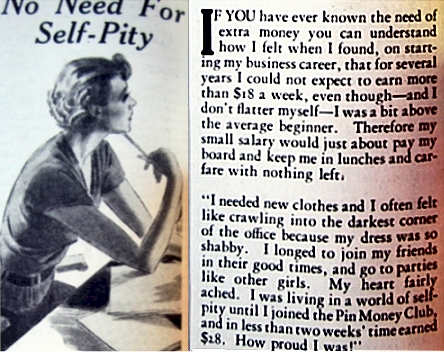 “… For several years I could not expect to earn more than $18 a week, even though … I was a bit above the average beginner. Therefore my small salary would just about pay my board and keep me in lunches and carfare with nothing left. I needed new clothes [for] the office … because my dress was so shabby.”

Woman’s Clothing Budget in the 1930’s

In 1936, this article asked “Can a college girl dress on a dollar and a half a week?” 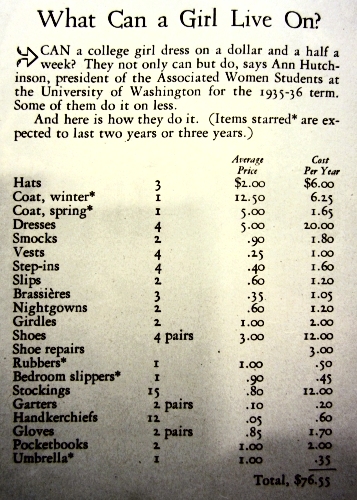 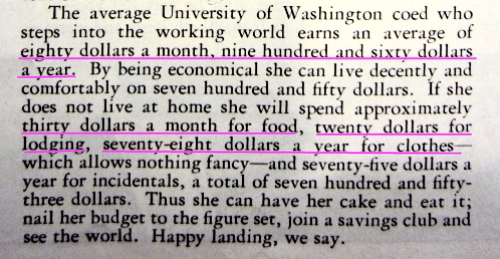 Woman’s Clothing Budget in the 1920’s

The stenographer who wrote to Delineator magazine in August, 1924, asked how a woman with an office job could live — and dress well enough to satisfy her employers — on $18 a week.

That’s right:  The salary of a female office worker was exactly the same — $18 per week — in 1924 and 1936. But in 1924, The Delineator’s experts reached a somewhat different conclusion about her necessary expenditures on clothing.

I’m not enthusiastic about the way Woman’s Home Companion rounded $18 per week up to “$80 per month or $960 per year,” so I’ve compared percentages of  income as stated, and lightened my derived figures on this chart.) I multiplied $18 by 52 weeks; WHC multiplied $20 x 4 x 12 months.) 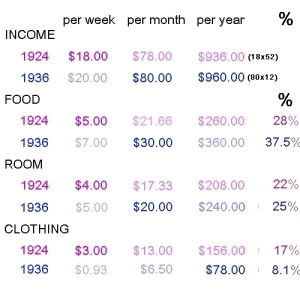 Percent of income spent on Food, Lodging, and Clothes as budgeted in Woman’s Home Companion (1936) and Delineator (1924). Click to enlarge. It assumes living in a rented room, probably without a kitchen, and eating many meals out.

Just for fun, I tried to find comparable items in the Sears Roebuck catalogs for 1924 and 1936, always choosing the cheapest similar items I could find to build a stenographer’s wardrobe.

After browsing through Sears Roebuck Catalogs for 1924 and 1936, I’m struck by the decrease in some clothes prices. (In both cases, I looked for the very cheapest, not the mid-priced, garments.) 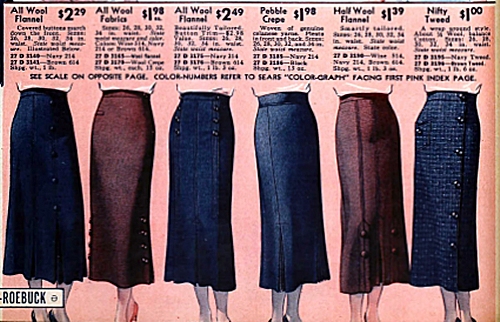 Inexpensive blouses were easier to find in the thirties, too.

Inexpensive blouses from the Sears catalog, Fall, 1924. Three of these cost less than a dollar each, but the most expensive is $3.48 — or more, in stout sizes. 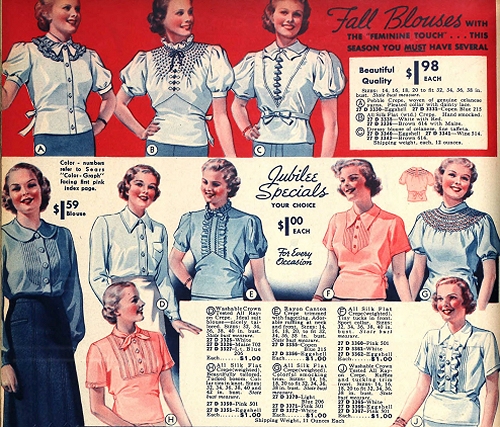 A typist could buy a skirt and blouse for less than $3.00 in the thirties, or about $4.50 in the twenties. But she’d have to settle for the cheapest clothes available from stores like Sears, not from upscale department stores.

Dresses suitable for the office:

The cheapest Sears dresses (excluding cotton housedresses) cost about $5.00 in 1924:

Wool dresses suitable for for the office, Sears catalog, Fall 1924. These three were among the very cheapest in the catalog, with many more dresses in the $8 to $16 range. The average price of the 11 dresses described on this page is $7.39.

In 1936, most Sears business dresses were made of Celanese, rather than wool, so they are not strictly comparable. 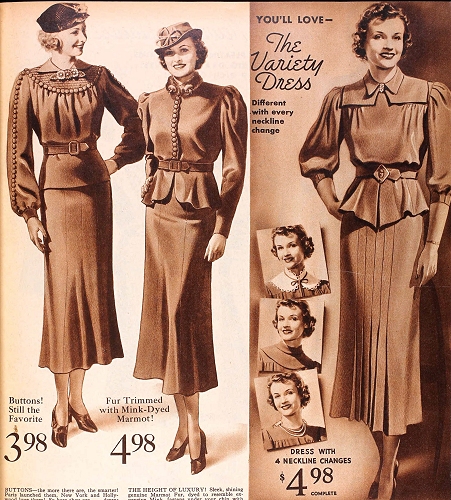 Dresses from Sears catalog, Fall 1936. The $5 dress on the right can be transformed with different necklines.

The cheapest nineteen thirties’ office dresses from Sears are about $4; and the variety in this lowest price range is much bigger than in the twenties. Office workers with only one or two dresses could make it seem like they had more by wearing different collars. (See One Good Dress in the 1930’s. ) Patterns for “change-about” dresses were also available. In 1936, the Woman’s Home Companion budget allowed a stenographer just four dresses per year, at $5 each.

You could find a winter coat for about $9 at Sears in the twenties or the thirties. Of course, a coat was expected to last at least two years.

Better quality fur-trimmed coats from Sears could cost $49 in 1924. And our “stenographer” had only $156 to spend on an entire, year-round wardrobe — coats, shoes, dresses, hats, stockings at about $1 per pair (a big ongoing expense), underwear, etc. 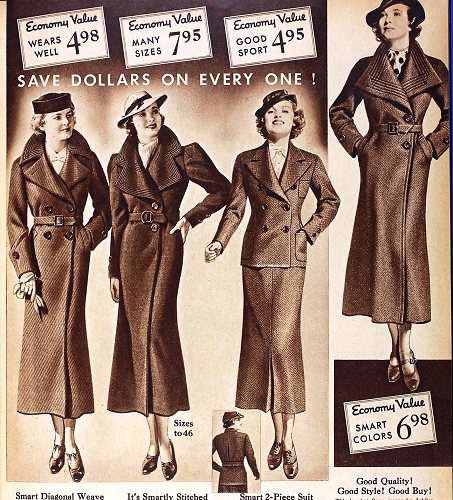 In 1936, The Woman’s Home Companion budgeted $12.50 for a winter coat, every other year. These coats from Sears are a real bargain — assuming that they actually kept you warm and dry. 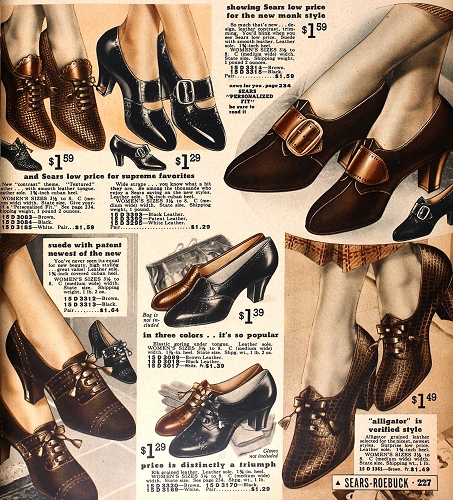 In 1936, The Woman’s Home Companion allowed a young woman four pairs of shoes per year — at $3 per pair.

Conclusion:  A careful shopper, fresh out of college and earning $18 per week, could definitely make her clothing budget go farther in 1936 than in 1924 — but she would not be buying $6.50 shoes, and no one with an eye for quality would consider her well-dressed. 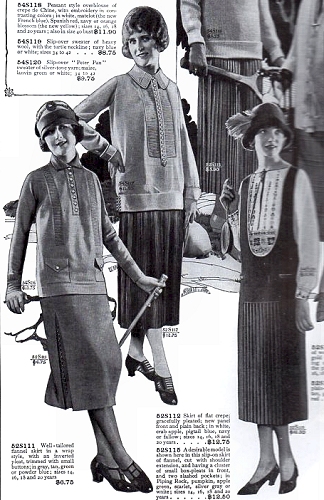 No wonder there was a boom in clothing patterns and home sewing in the 1920’s — largely because early twenties’ dress styles were easier to make than ever before. Isaac Singer is credited with the invention of the installment plan, but you’d have to make a lot of clothes to amortize the cost of a sewing machine….

CAUTION:  I did this study for fun, and tried to be accurate. But these samples are much too small for real scholarship. Since not all issues of Delineator and Woman’s Home Companion are widely available — or indexed — I wanted to let serious students of economics know that this material exists — and deserves a more thorough evaluation than I am capable of doing.