Hem length from 1929 to 1931, from Sears catalogs. In 1929, the hem is above the kneecap; two years later it has dropped to mid-calf, and the belt has returned to the natural waist.

In 1929, hems were already on their way down. An article by Pamela A. Parmai at Love To Know cites an article in the New York Times from October 27, 1929 — two days before the Black Friday stock market crash — which said, “some women claimed that the effort to put them back in long skirts was ‘an insidious attempt to lure women back into slavery.’ ” Parmai implies that, since skirts had already been at the knee for two or three years, clothing manufacturers were eager for a change. It seems the stock market started down after skirts did. 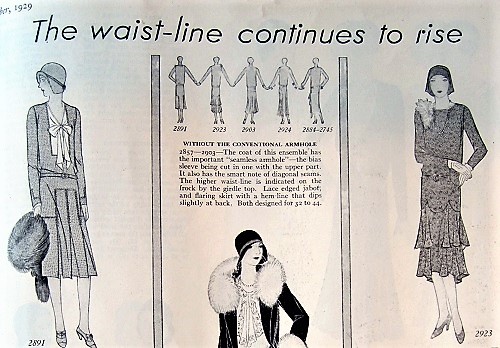 However, in November of 1929, Delineator’s fashion editors weren’t completely focused on longer skirts; this article was about rising waists. [The lead time which put magazines in stores by November meant that articles and illustrations had to be ready long before the end of October, and the stock market crash on October 29th. Longer hems are mentioned, but not in the title of this article. ]

Butterick 2891 has a belt near the natural waist. November, 1929, Delineator.

The next dress has a two-layer skirt, with one layer ending above the knee (where dresses ended in 1928) and one below the knee, a transitional fashion to longer skirts.

Butterick frock 2923 from November 1929. Delineator. Note the belt, which is just at the hipbone [and I bet it didn’t stay there easily, even with belt carriers.]

This dress has “three of the very newest features:” greater length, higher waist, snug hips and a dipping hem. [Wait — isn’t that four? Not really. Dipping hems were well-established by 1928.]

Butterick 2924 shows a longer hem and a shirred waist that sits on the hipbone rather than the hip. Delineator, November, 1929. It covers the knees completely.

“The line is longer, as it must be this season,” and the waist line is higher.

“The higher waist-line is indicated on the frock by the girdle top.” The “girdle” is that band of fabric around the hips. It does look a little higher than these earlier “snug hips” of June 1929:

A snug-hipped dress and matching jacket from June of 1929, Delineator. Butterick 2646.

Back in June, 1928, these dresses showed a tight, low hip girdle:

Butterick patterns in Delineator, June 1928, show a low hip girdle, expecially the one on the left, which appears to be far below the hip-bone.

The elongated torso of 1920’s fashion illustration makes the waist hard to locate on this blouse.

Butterick blouse 2884 with wrap skirt 2745, from November 1929, Delineator. The blouse is gathered to the hip just below the natural waist –where many women’s trousers rested in the 2000’s.

Blouses from the early 1930’s (see below) were often overblouses, not too different from blouse 2884.

Tunic blouse outfits from Butterick; Delineator, December, 1924. Within three years, dresses were shorter than these “blouses.”

I do find transitional fashions interesting. Back in 1924 — 1925, these tunic blouses eased the transition to shorter hems by providing two horizontal lines — one near the knee (the coming fashion) and one at low mid-calf (the early Twenties’ length.)

I’ve found a few tunic styles easing the transition from late Twenties to early Thirties, too.

The natural waist, accented by a belt, is taken for granted by 1931. 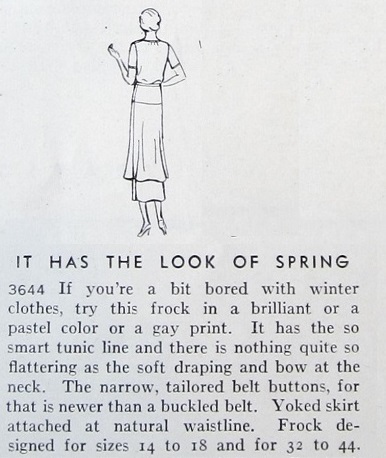 Right, below,  is a “tunic blouse” and skirt combination; this “blouse” is as long as a late Twenties’ dress.

The tunic blouse is shown in mid-thigh (back view) and knee lengths.

It’s surprising how brief the period of knee-length twenties’ fashion really was — as this cartoon from January, 1929 implies.

It’s more evidence that early in 1929, skirts were already on their way down.