Chew Gum for Beauty – and Be Polite About It! (Part 3)

A Graceful Cheek Line – Thanks to Chewing Gum

Wrigley’s campaign to convince women that chewing gum twice a day would give them shapely lips and firm up their cheeks lasted several years.  This ad is notable for the “sculptured” hairstyle – and the graceful curve of the cheek which “depends very much upon chewing”  for ten or fifteen minutes a day. Here’s a closeup of that hair; the odd thing is that I have yet to see an ad for hair lacquer or styling products in a 1930s magazine.

This ad, on the other hand, is blatantly sexy – although it says it’s about clear skin, resulting from the improved circulation chewing gum will give you.

By 1934, the idea that chewing gum in public was vulgar – “not done” by the upper classes – was giving way to new manners. Delineator magazine helpfully ran an article on the etiquette of gum-chewing.

“Yesterday may have said ‘Chewing gum is taboo’. . . . Now it’s natural – isn’t it? – when the chewing of gum is taken for granted [on airplanes, during sports, etc.] that the margins should broaden and that we should enjoy chewing gum at other times. ” 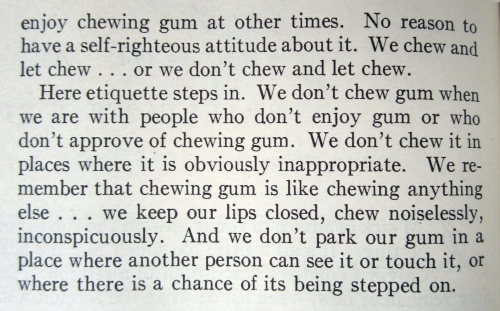 (The rules seem very much like those for smoking cigarettes:  ask permission before you smoke, offer the other party a cigarette/stick of gum, say no politely, don’t throw your refuse on the ground, etc.)

Notice the “college girl” look of a sweater worn with a white collar. And pearls are always a classy touch.

“There’s no one around you who doesn’t approve? Well, then you say, ‘Yes, Thank you.’. . . Finished?  Never put gum where another person can see it or touch it.”

“The plane-hostess provides you with a ration of gum, and you chew it, inconspicuously.”  Flying was still not a common experience, and people got dressed up as if for church when traveling by air.

In 1950 I took a flight to Los Angeles with my aunt, in a propeller plane. The passengers were all given sticks of gum – not for pleasure, but because chewing it during takeoff and landing helped to equalize the pressure in your ears. (Gum makes you swallow more often.) Airplanes have better pressurization now that they fly higher, but I still carry gum when I travel – even though my orthodontist forbids it the rest of the time. How nice to know that Delineator’s Etiquette columnist would approve.