The “suspender skirt” — called the “Pretty Peggy Skirt” in the Fall 1925 Sears catalog — was available in several Butterick patterns for women and girls during 1925. I hate to keep mentioning Downton Abbey, but I remembered seeing suspender skirts in Delineator magazine because Lady Edith recently appeared wearing one. (She was photographed mostly from the waist up, so I can’t be absolutely certain, but it looked like she was wearing a dark suspender skirt with a white blouse in the brief scene where she told Tom that she intended to leave Downton Abbey without talking to anyone.)

It’s a rather strange fashion, and was sometimes described as a skirt, and sometimes as a dress. In America today, we’d be inclined to call it a “jumper,” meaning a sleeveless dress designed to be worn over a blouse. (“Jumper” is one of those words, like “braces” and “vest,” which mean a completely different piece of clothing in the U.K.)  Sometimes, as above, it was scooped to above the natural waist, but some versions appear to be open so low that the blouse wrinkles.

Designers had already shown one-piece dresses with a curved contrasting “bib,” one of many ploys for adding a vertical element, or a contrasting element near the face, to mid-1920’s fashions. 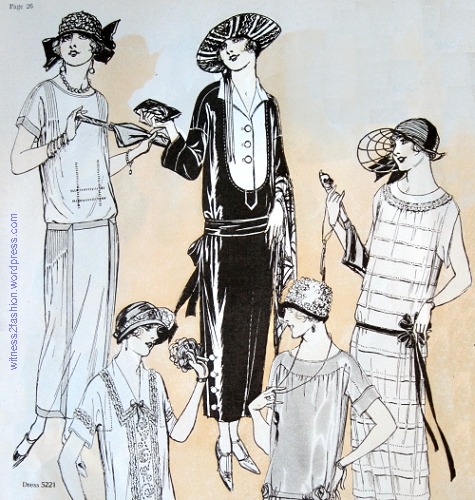 A dark dress with a contrasting bib effect. May, 1924. Delineator.

The suspender skirt, however, was a skirt with wide shoulder straps — often bias bound — and a low, curved front, worn over a separate blouse. Patterns were available for women, teens ( called “misses”) and girls. In adult sizes, patterns for the blouse and skirt were sold separately, sometimes with a matching jacket or vest pattern, too. Suspender skirts for girls, however, included the blouse pattern — probably because child-sized patterns used less paper. 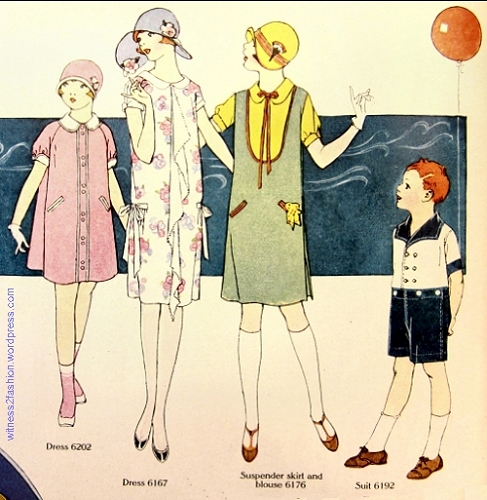 Many of the suspender skirts were shown over blouse pattern 5903, which has a smocked neckline and “folk” embroidery.

In 1925, dresses were often shown with a decorative handkerchief hanging out of the pocket, like most of these. 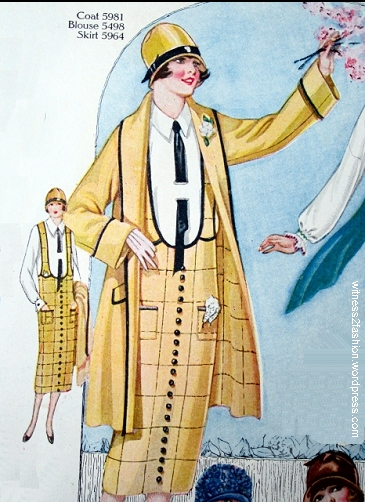 In this version, the coat is lined with the plaid wool used for the skirt. The blouse, Butterick 5498, first appeared in 1924. 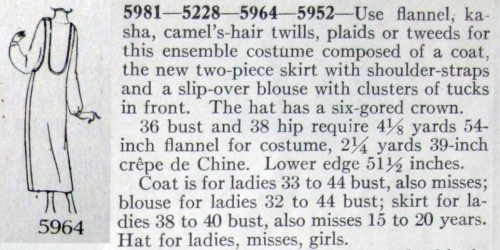 Pattern information for skirt #5964 and the coat, #5981. The same coat and skirt were featured two months in a row; this describes them worn a different blouse and hat. From the April, 1925 Delineator.

Pattern information for skirt #5997, when it was featured in a different magazine issue with the sleeveless jacket, #6001, below.

Suspender skirt #5979, on the right above, was also illustrated in red, with a sleeveless jacket and contrast binding:

Pattern information for Butterick skirt #5979 and jacket #6001; this is the description from a different month, which showed the skirt and jacket with a different blouse and hat.

The vocabulary was not always used precisely; the outfit on the left, below, was called a “suspender skirt” and blouse, but the one on the right was described as a “dress” and blouse. They are shown with two versions of the same blouse, #5508, from 1924.

Another thing worth noting, for the light it sheds on pattern production:  all but one of the suspender skirts have exactly the same back. 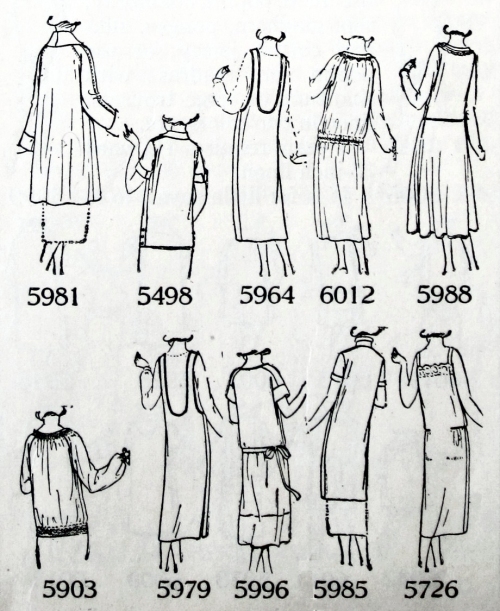 Personally, I suspect that the reason why this style only appeared for a short time was that it’s a bad design; with the back scoop as low as the front scoop, the straps would fall off your shoulder every time  you reached down, especially when you were sitting. Only #5997 solves the problem with a higher scoop in back than in front.  If you make a suspender skirt, copy this back. 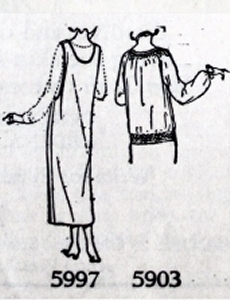