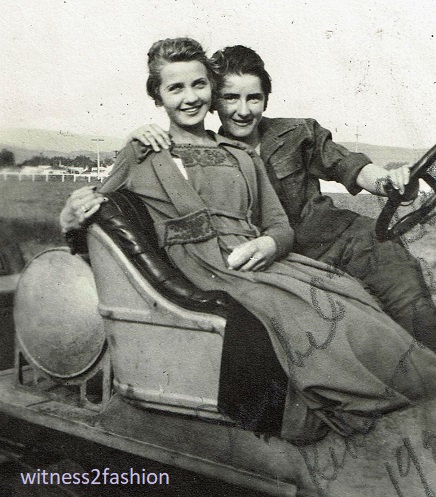 Imagine how dreary costume history in the 20th century would be without photographs — not just posed studio photographs, but the millions of pictures taken of and by ordinary people. Small, simple to operate, “pocket” cameras really did give us a window into the past. 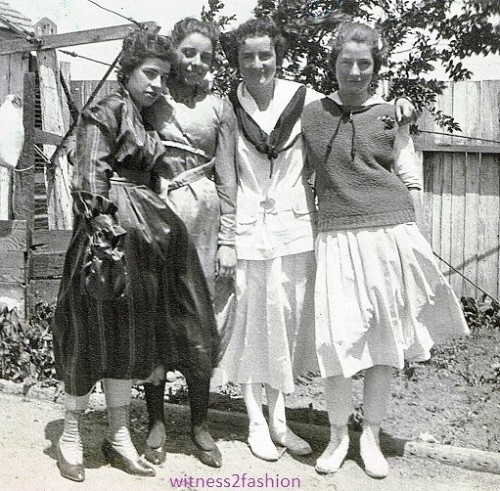 Four teenaged girls from Redwood City, California, pose in a back yard on May 5, 1918. From left, Edith Nicholls, Ruth Cross, Dot and Helen Barton. Edith and Ruth are wearing fashionable dresses; Dot wears her school uniform and Helen adds a sleeveless sweater to hers.

I have written before about the importance of informal snapshots during  World War I, made possible by the development of small, light-weight, portable “pocket” cameras. Click here for that post.

Soldiers also took photos with the “vest pocket” Kodak and mailed them to the their families and friends.

Kodak was also developing innovative cameras for use at home. This 1917 advertisement is for the Kodak Autographic camera, which allowed you to record when and of whom the picture was taken on the negative: a 1917 time stamp!

Ad for the “Autographic Kodak”, from Delineator magazine, July 1917.

“And to make an authentic, permanent record, on the negative, is a simple and almost instantaneous process with an Autographic Kodak.” 1917.

This ad appeared seven years later, but the “family” focus is the same. 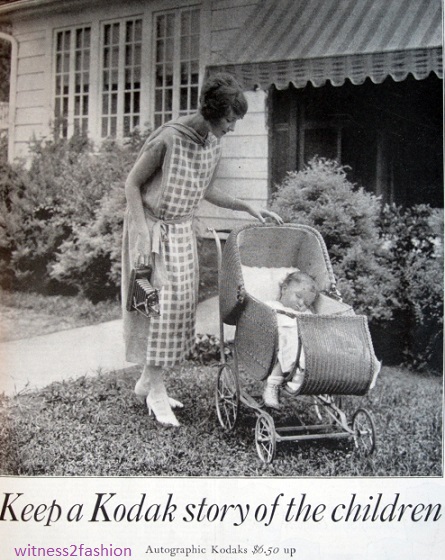 Ad for the Autographic Kodak from Delineator, May 1924.

The Autographic Kodak was still being advertised in 1924, but, sadly, no one in my family seems to have had one — so they wrote on the pictures, sometimes long after they were developed, and not always accurately.

The folks in this group photo are named in ink on the margin of the picture.

Dot in the cockpit and Isabel beside the plane, dated 1920. Was this picture really taken in a different year? Did they take flying lessons? Some women did — quite successfully.

By 1927 you could take your own moving pictures: 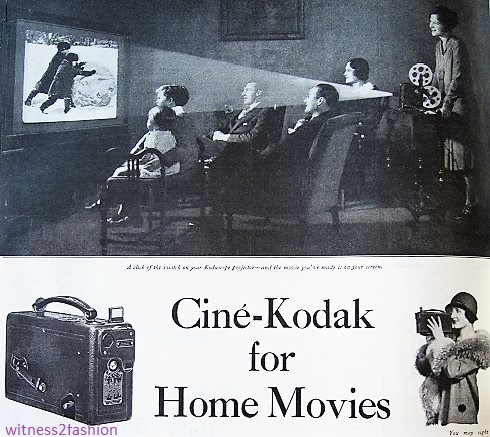 Home movies taken with a Cine-Kodak, from an ad in Delineator, March 1927.

From an ad for the Cine-Kodak, Delineator, May 1927. The cost of a camera, plus a “Kodascope C  for projecting,” and a projection screen, was $140. “The price of Cine-Kodak film, amateur standard (16 mm.), in the yellow box, includes finishing.”

My Uncle Mel had a movie camera in the late 1940s, and, as the only toddler in the family, I was filmed so often that when my parents took me to a movie theater for the first time, I watched for several minutes and then began shouting, “Where’s Me? Where’s Me?” 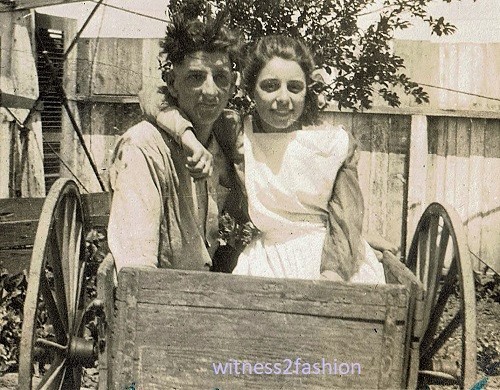 My Uncle Mel as a teenager, with Ruth Cross. Ruth wears a pinafore. WW I era.

How I wish I could watch those family movies today — to see my parents and grandma and aunts and uncles in motion, wearing their ordinary clothes, doing ordinary things….

Family and friends at a party in the early 1930s. I recognize many of these faces, although I was born many years later. The photo is about this small, since it was a contact print.

The McLeods pose for a snapshot. The mother is dressed very differently from her daughters. 1920s.

Three men pose in La Honda, CA, in the 1920s. Yes, people did wear those golf outfits, [matching sweater and socks!] even when not playing golf. 1920s.

In the late 1920’s, pocket cameras were so common that Kodak advertised them in different colors, to match your outfits. Obviously, women were taking a lot of the pictures that we treasure today.

Ad for Vanity Kodaks in colors to match your outfit. Delineator, June 1928.

My Aunt Dot took to photography early. You can see her shadow as she takes this photograph of young Azalia Dellamaggiore in front of the Redwood City courthouse in 1918.

Here Dot and a soldier are photographed by someone else, but Dot has her camera in her hand. 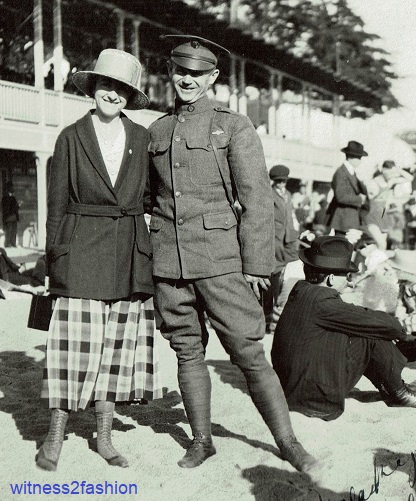